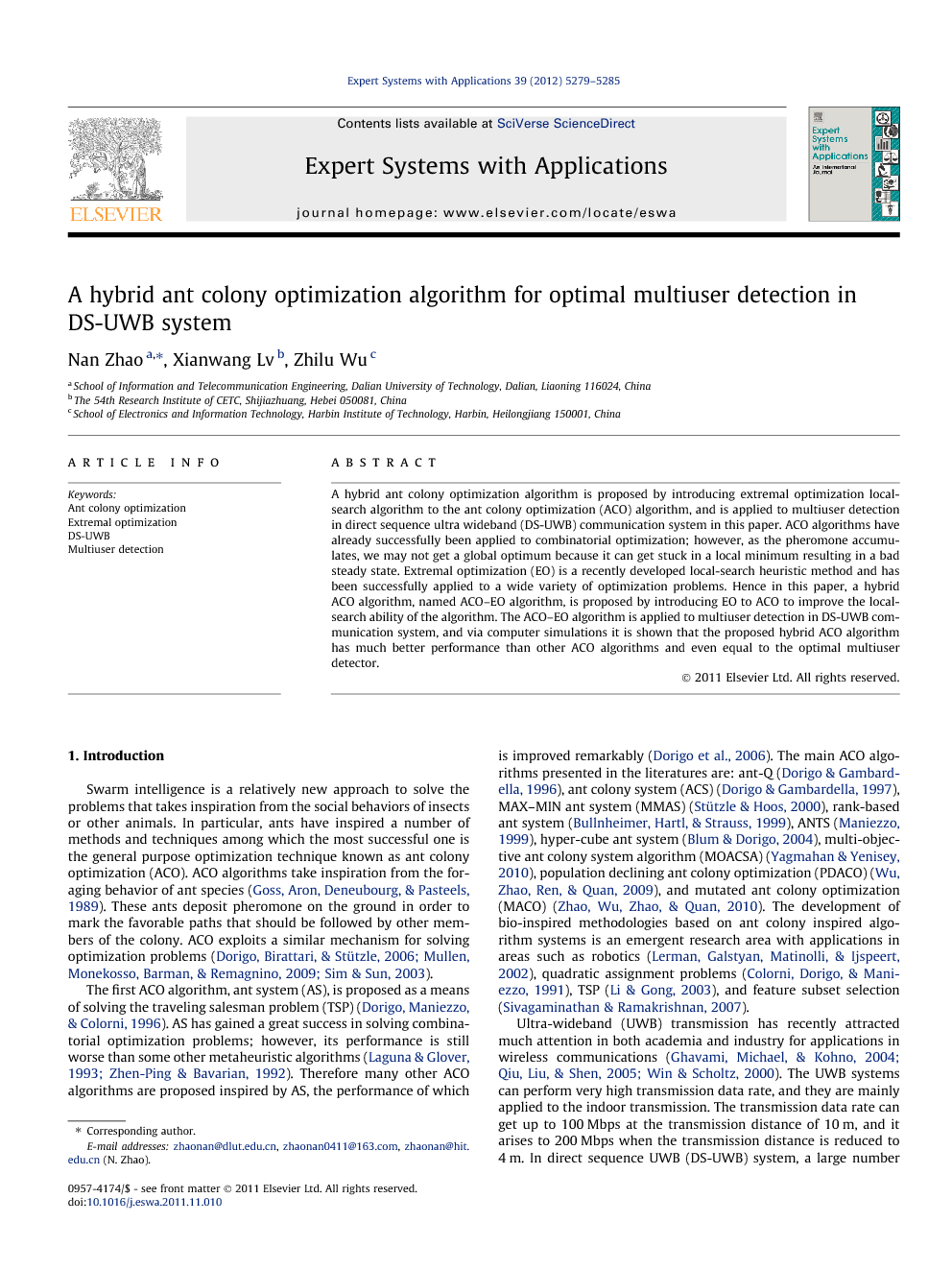 Swarm intelligence is a relatively new approach to solve the problems that takes inspiration from the social behaviors of insects or other animals. In particular, ants have inspired a number of methods and techniques among which the most successful one is the general purpose optimization technique known as ant colony optimization (ACO). ACO algorithms take inspiration from the foraging behavior of ant species (Goss, Aron, Deneubourg, & Pasteels, 1989). These ants deposit pheromone on the ground in order to mark the favorable paths that should be followed by other members of the colony. ACO exploits a similar mechanism for solving optimization problems (Dorigo et al., 2006, Mullen et al., 2009 and Sim and Sun, 2003). The first ACO algorithm, ant system (AS), is proposed as a means of solving the traveling salesman problem (TSP) (Dorigo, Maniezzo, & Colorni, 1996). AS has gained a great success in solving combinatorial optimization problems; however, its performance is still worse than some other metaheuristic algorithms (Laguna and Glover, 1993 and Zhen-Ping and Bavarian, 1992). Therefore many other ACO algorithms are proposed inspired by AS, the performance of which is improved remarkably (Dorigo et al., 2006). The main ACO algorithms presented in the literatures are: ant-Q (Dorigo & Gambardella, 1996), ant colony system (ACS) (Dorigo & Gambardella, 1997), MAX–MIN ant system (MMAS) (Stützle & Hoos, 2000), rank-based ant system (Bullnheimer, Hartl, & Strauss, 1999), ANTS (Maniezzo, 1999), hyper-cube ant system (Blum & Dorigo, 2004), multi-objective ant colony system algorithm (MOACSA) (Yagmahan & Yenisey, 2010), population declining ant colony optimization (PDACO) (Wu, Zhao, Ren, & Quan, 2009), and mutated ant colony optimization (MACO) (Zhao, Wu, Zhao, & Quan, 2010). The development of bio-inspired methodologies based on ant colony inspired algorithm systems is an emergent research area with applications in areas such as robotics (Lerman, Galstyan, Matinolli, & Ijspeert, 2002), quadratic assignment problems (Colorni, Dorigo, & Maniezzo, 1991), TSP (Li & Gong, 2003), and feature subset selection (Sivagaminathan & Ramakrishnan, 2007). Ultra-wideband (UWB) transmission has recently attracted much attention in both academia and industry for applications in wireless communications (Ghavami et al., 2004, Qiu et al., 2005 and Win and Scholtz, 2000). The UWB systems can perform very high transmission data rate, and they are mainly applied to the indoor transmission. The transmission data rate can get up to 100 Mbps at the transmission distance of 10 m, and it arises to 200 Mbps when the transmission distance is reduced to 4 m. In direct sequence UWB (DS-UWB) system, a large number of users can communicate simultaneously on the same frequency band; however, it also creates multiple access interference (MAI). The MAI makes the conventional detector (CD), which can demodulate only one spread-spectrum signal without considering other signals, unreliable and insensitive to near-far effect in a multiuser environment. For this reason multiuser detection, which can overcome this problem, is a hot topic now for DS-UWB systems (Kaligineedi & Bhargava, 2008). We can use the optimal multiuser detector based on the maximum likelihood (ML) rule proposed by Verdu (1986) for code division multiple access (CDMA) systems. In the DS-UWB systems, the optimal multiuser detection (OMD) based on ML rule was proposed by Yoon and Kohno (2002). OMD is shown to be near-far resistant and has the optimal performance, however, the exponential complexity in the number of users makes it impractical to use in current DS-UWB system. Therefore, research efforts have been concentrated on the development of suboptimal detectors, which exhibit good near-far effect resistant properties, have low computational complexity and achieve relatively high performance (Cheng, Wen, Hsu, Huang, 2009 and Lin and Wang, 2008). ACO algorithms can also be used in multiuser detection in CDMA system as a kind of suboptimal detectors, in which the length of the tour in TSP is related to the objective function of the OMD (Hijazi and Natarajan, 2004 and Zhao et al., XXXX). However, ACO algorithms have never been applied to the multiuser detection in DS-UWB system. Recently, a general-purpose local-search heuristic algorithm, extremal optimization (EO) has been proposed (Boettcher and Percus, 1999 and Boettcher and Percus, 2000). EO is based on the Bak–Sneppen (BS) model (Bak & Sneppen, 1993), which shows the emergence of self-organized criticality (SOC) (Bak, Tang, & Wiesenfeld, 1987) in ecosystems. The evolution in this model is driven by a process where the weakest species in the population, together with its nearest neighbors, is always forced to mutate. Large fluctuations ensue, which enable the search to effectively scaling barriers to explore local optima in distant neighborhoods of the configuration space. To avoid premature convergence of ACO algorithm, a novel hybrid ACO algorithm, named ACO–EO is proposed by introducing EO to ACO to improve the local-search ability of ACO algorithm in this paper. In the algorithm, ACO ensures that the search converges faster, while EO makes the search to jump out of local optima due to its strong local-search ability. In this paper, ACO–EO multiuser detector is proposed by applying ACO–EO algorithm to multiuser detection. Via simulations, it is shown that the ACO–EO multiuser detector has a much better performance in reducing the near-far effect than the ACO multiuser detector, PDACO multiuser detector, and MACO multiuser detector, as well as a superior performance in bit-error rate (BER). The performance of ACO–EO multiuser detector is even equal to OMD. The remainder of this paper is organized in four sections. In Section 2, some preliminaries about ACO are reviewed. In Section 3, EO algorithm is introduced and the hybrid ACO–EO algorithm is proposed. In Section 4, the background of multiuser detection in DS-UWB is reviewed, and ACO–EO multiuser detector for DS-UWB is proposed. In Section 5, the performance of the ACO–EO multiuser detector is compared with the ACO multiuser detector, PDACO multiuser detector, MACO multiuser detector, and some other detectors