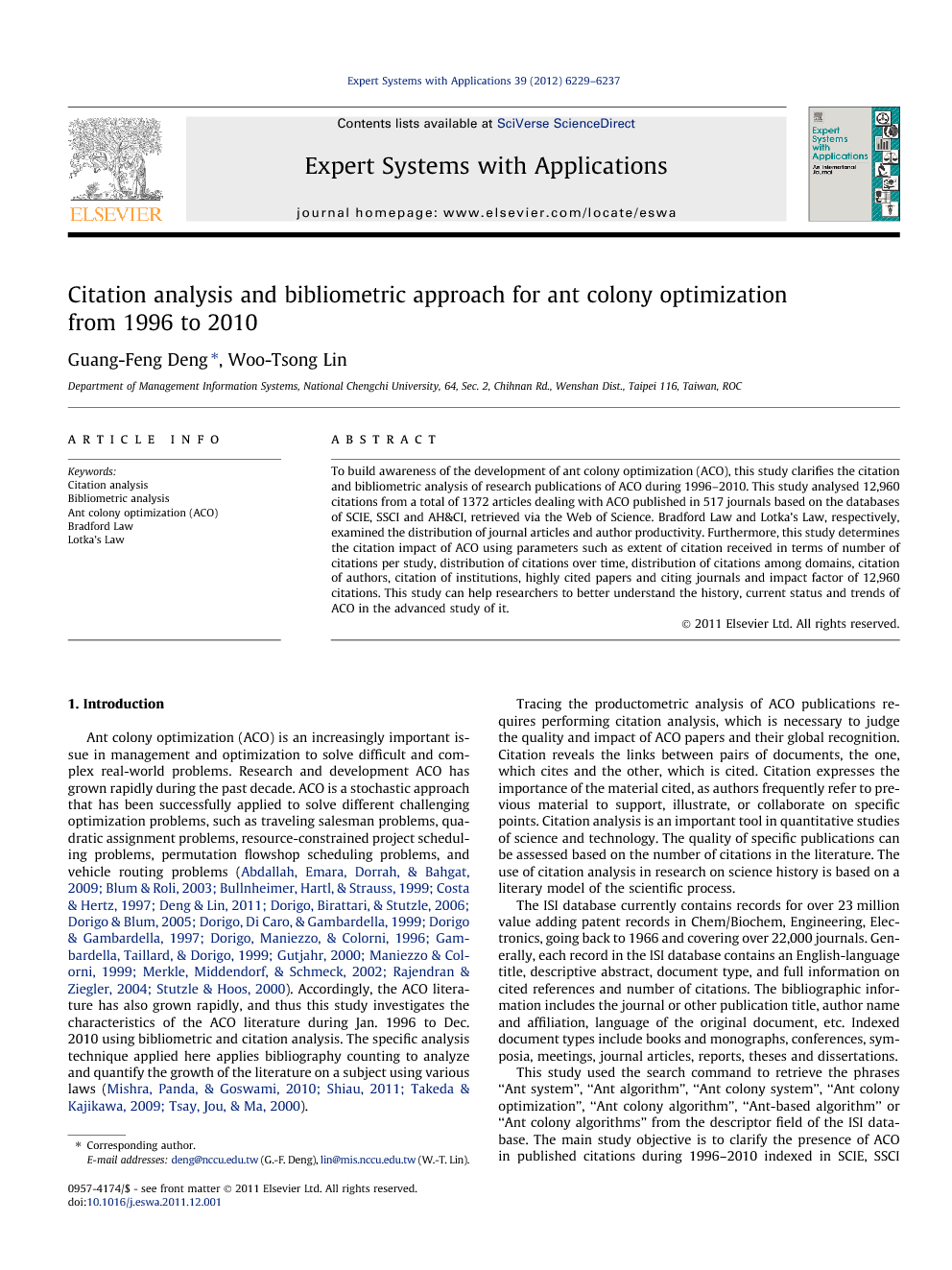 To build awareness of the development of ant colony optimization (ACO), this study clarifies the citation and bibliometric analysis of research publications of ACO during 1996–2010. This study analysed 12,960 citations from a total of 1372 articles dealing with ACO published in 517 journals based on the databases of SCIE, SSCI and AH&CI, retrieved via the Web of Science. Bradford Law and Lotka’s Law, respectively, examined the distribution of journal articles and author productivity. Furthermore, this study determines the citation impact of ACO using parameters such as extent of citation received in terms of number of citations per study, distribution of citations over time, distribution of citations among domains, citation of authors, citation of institutions, highly cited papers and citing journals and impact factor of 12,960 citations. This study can help researchers to better understand the history, current status and trends of ACO in the advanced study of it.

Ant colony optimization (ACO) is an increasingly important issue in management and optimization to solve difficult and complex real-world problems. Research and development ACO has grown rapidly during the past decade. ACO is a stochastic approach that has been successfully applied to solve different challenging optimization problems, such as traveling salesman problems, quadratic assignment problems, resource-constrained project scheduling problems, permutation flowshop scheduling problems, and vehicle routing problems (Abdallah et al., 2009, Blum and Roli, 2003, Bullnheimer et al., 1999, Costa and Hertz, 1997, Deng and Lin, 2011, Dorigo et al., 2006, Dorigo and Blum, 2005, Dorigo et al., 1999, Dorigo and Gambardella, 1997, Dorigo et al., 1996, Gambardella et al., 1999, Gutjahr, 2000, Maniezzo and Colorni, 1999, Merkle et al., 2002, Rajendran and Ziegler, 2004 and Stutzle and Hoos, 2000). Accordingly, the ACO literature has also grown rapidly, and thus this study investigates the characteristics of the ACO literature during Jan. 1996 to Dec. 2010 using bibliometric and citation analysis. The specific analysis technique applied here applies bibliography counting to analyze and quantify the growth of the literature on a subject using various laws (Mishra et al., 2010, Shiau, 2011, Takeda and Kajikawa, 2009 and Tsay et al., 2000). Tracing the productometric analysis of ACO publications requires performing citation analysis, which is necessary to judge the quality and impact of ACO papers and their global recognition. Citation reveals the links between pairs of documents, the one, which cites and the other, which is cited. Citation expresses the importance of the material cited, as authors frequently refer to previous material to support, illustrate, or collaborate on specific points. Citation analysis is an important tool in quantitative studies of science and technology. The quality of specific publications can be assessed based on the number of citations in the literature. The use of citation analysis in research on science history is based on a literary model of the scientific process. The ISI database currently contains records for over 23 million value adding patent records in Chem/Biochem, Engineering, Electronics, going back to 1966 and covering over 22,000 journals. Generally, each record in the ISI database contains an English-language title, descriptive abstract, document type, and full information on cited references and number of citations. The bibliographic information includes the journal or other publication title, author name and affiliation, language of the original document, etc. Indexed document types include books and monographs, conferences, symposia, meetings, journal articles, reports, theses and dissertations. This study used the search command to retrieve the phrases “Ant system”, “Ant algorithm”, “Ant colony system”, “Ant colony optimization”, “Ant colony algorithm”, “Ant-based algorithm” or “Ant colony algorithms” from the descriptor field of the ISI database. The main study objective is to clarify the presence of ACO in published citations during 1996–2010 indexed in SCIE, SSCI and AH&CI retrieved using the Web of Science. This study has the following specific objectives: (1) Explore the growth of the ACO literature. (2) Identify citation growth of the ACO literature. (3) Determine the time lag between paper publication and first citation. (4) Clarify the domain wise distribution of citations. (5) Determine a core of primary journals in which the literature on ACO in most heavily represented. (6) Examine the distribution of citations among journals. (7) Identify highly cited papers and track their citation life cycle. (8) Reveal the distribution of the citing journals according to their impact factors. (9) Identify the major contributing countries that publish the largest numbers of ACO articles and clarify the distribution of citing papers based on country of publication. (10) Find the productivity distribution of authors and their institutions on this subject. (11) Determine Cited Authorship Productivity and Lotka’s Law. (12) Plot the Bradford-Zipf graph.

Citation and impact factor clearly indicate the quality of the literature on ACO. This investigation shows that, during the last 15 years, ACO publications received 12960 citations spread among 517 journals, with impact factor ranges varying from 0.01 to 5.00. Research on ACO was cited by 982 world reputable institutions from 73 countries. This study examined the growth of the ACO literature, based on the ISI database, and tested the various characteristics of the literature using bibliometric techniques. The following results were obtained: 1. Following 2003, the literature grew approximately linearly, a rate of approximately 50 records per year, and peaked in 2009 with about 250 records. 2. The journal literature on ACO roughly conforms to the typical S-shape Bradford-Zifp plot during the initial stage, but does not show the final droop during the later stage. Clearly ACO is not yet widely referred to in the journal literature. 3. The Bradford-Zipf plot reveals 23 core journals. Approximately 33% of the literature is concentrated in the first 23 journals, with the remaining 67% being scattered among the other 494 journals. 4. The journal with the largest number of articles was Expert systems with applications, with 50 articles, representing 3.63% of the total, and the journal with the largest number of citations was IEEE transactions on systems man and cybernetics part b-cybernetics, with 2033 citations, representing 15.68% of the total. 5. The China is the leading publishing country (approximately 21.63% of the total ) and Belgium is the leading country which receives citations (approximately 20.10% of the total). 6. The vast majority (71%) of authors contributed only one article citing ACO. Moreover, the author productivity distribution does not fit the original Lotka law. 7. Only slightly over 1% of authors contributed more than ten articles citing ACO. The author with the largest number of papers citing ACO contributed 27 such papers. 8. Analysis of author affiliated institutions illustrates that ACO research is concentrated in major universities. The present study could be enhanced by including more bibliometric parameters and conducting a comparative study involving a similar field of research, such as particle swarm optimization.