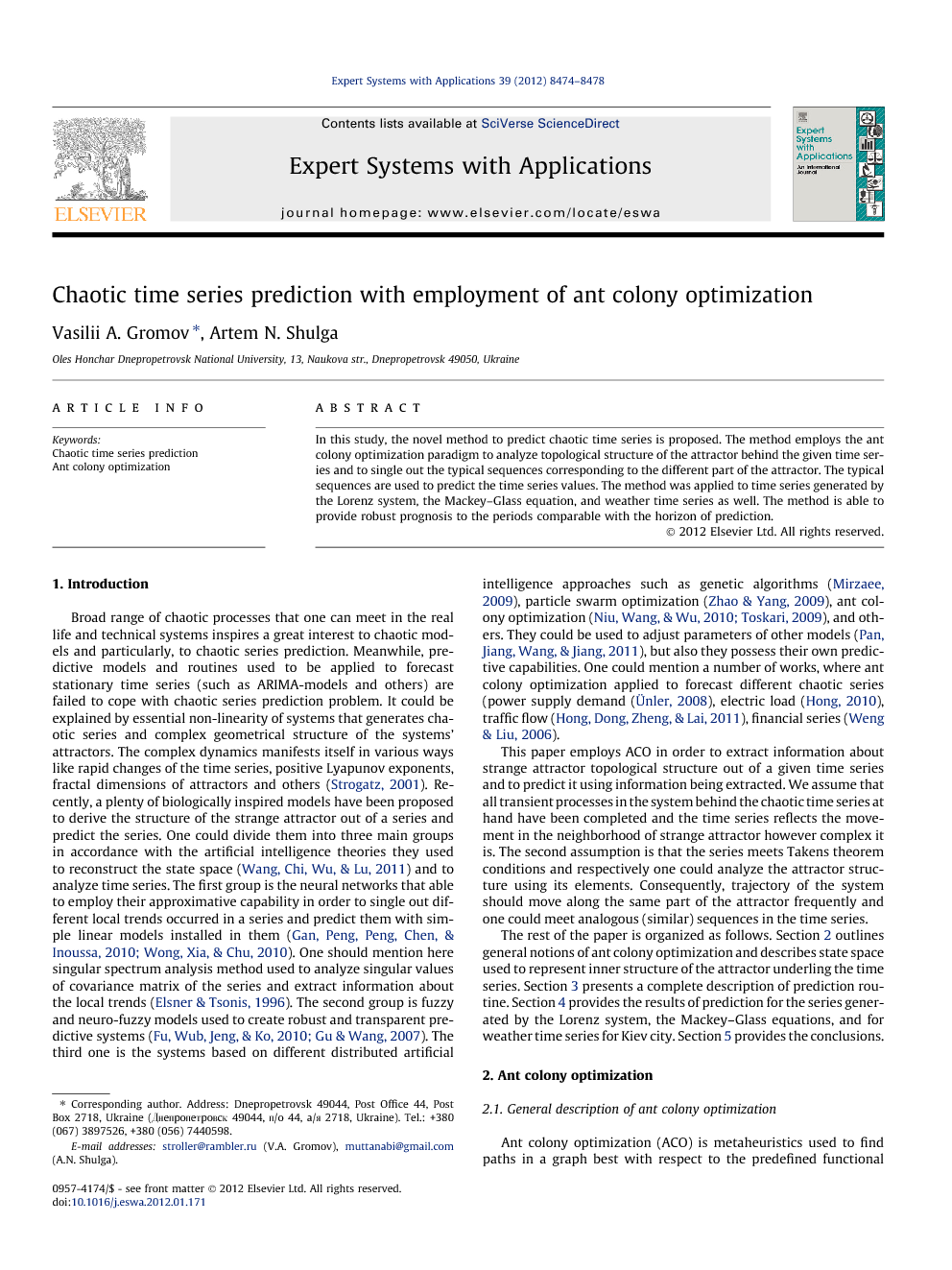 Broad range of chaotic processes that one can meet in the real life and technical systems inspires a great interest to chaotic models and particularly, to chaotic series prediction. Meanwhile, predictive models and routines used to be applied to forecast stationary time series (such as ARIMA-models and others) are failed to cope with chaotic series prediction problem. It could be explained by essential non-linearity of systems that generates chaotic series and complex geometrical structure of the systems’ attractors. The complex dynamics manifests itself in various ways like rapid changes of the time series, positive Lyapunov exponents, fractal dimensions of attractors and others (Strogatz, 2001). Recently, a plenty of biologically inspired models have been proposed to derive the structure of the strange attractor out of a series and predict the series. One could divide them into three main groups in accordance with the artificial intelligence theories they used to reconstruct the state space (Wang, Chi, Wu, & Lu, 2011) and to analyze time series. The first group is the neural networks that able to employ their approximative capability in order to single out different local trends occurred in a series and predict them with simple linear models installed in them (Gan et al., 2010 and Wong et al., 2010). One should mention here singular spectrum analysis method used to analyze singular values of covariance matrix of the series and extract information about the local trends (Elsner & Tsonis, 1996). The second group is fuzzy and neuro-fuzzy models used to create robust and transparent predictive systems (Fu et al., 2010 and Gu and Wang, 2007). The third one is the systems based on different distributed artificial intelligence approaches such as genetic algorithms (Mirzaee, 2009), particle swarm optimization (Zhao & Yang, 2009), ant colony optimization (Niu et al., 2010 and Toskari, 2009), and others. They could be used to adjust parameters of other models (Pan, Jiang, Wang, & Jiang, 2011), but also they possess their own predictive capabilities. One could mention a number of works, where ant colony optimization applied to forecast different chaotic series (power supply demand (Ünler, 2008), electric load (Hong, 2010), traffic flow (Hong, Dong, Zheng, & Lai, 2011), financial series (Weng & Liu, 2006). This paper employs ACO in order to extract information about strange attractor topological structure out of a given time series and to predict it using information being extracted. We assume that all transient processes in the system behind the chaotic time series at hand have been completed and the time series reflects the movement in the neighborhood of strange attractor however complex it is. The second assumption is that the series meets Takens theorem conditions and respectively one could analyze the attractor structure using its elements. Consequently, trajectory of the system should move along the same part of the attractor frequently and one could meet analogous (similar) sequences in the time series. The rest of the paper is organized as follows. Section 2 outlines general notions of ant colony optimization and describes state space used to represent inner structure of the attractor underling the time series. Section 3 presents a complete description of prediction routine. Section 4 provides the results of prediction for the series generated by the Lorenz system, the Mackey–Glass equations, and for weather time series for Kiev city. Section 5 provides the conclusions.

The proposed in the paper method of chaotic series prediction based on ant colony optimization is able to provide robust prognosis to the periods comparable with the horizon of prediction (it even breaks this barrier for the simplest cases). The method was tested with employment of series generated by the Lorenz system, the Mackey–Glass equation, and weather time series as well. The optimal parameters of the algorithm were found for the abovementioned time series. The algorithm demonstrates a computational convergence for the cases considered.