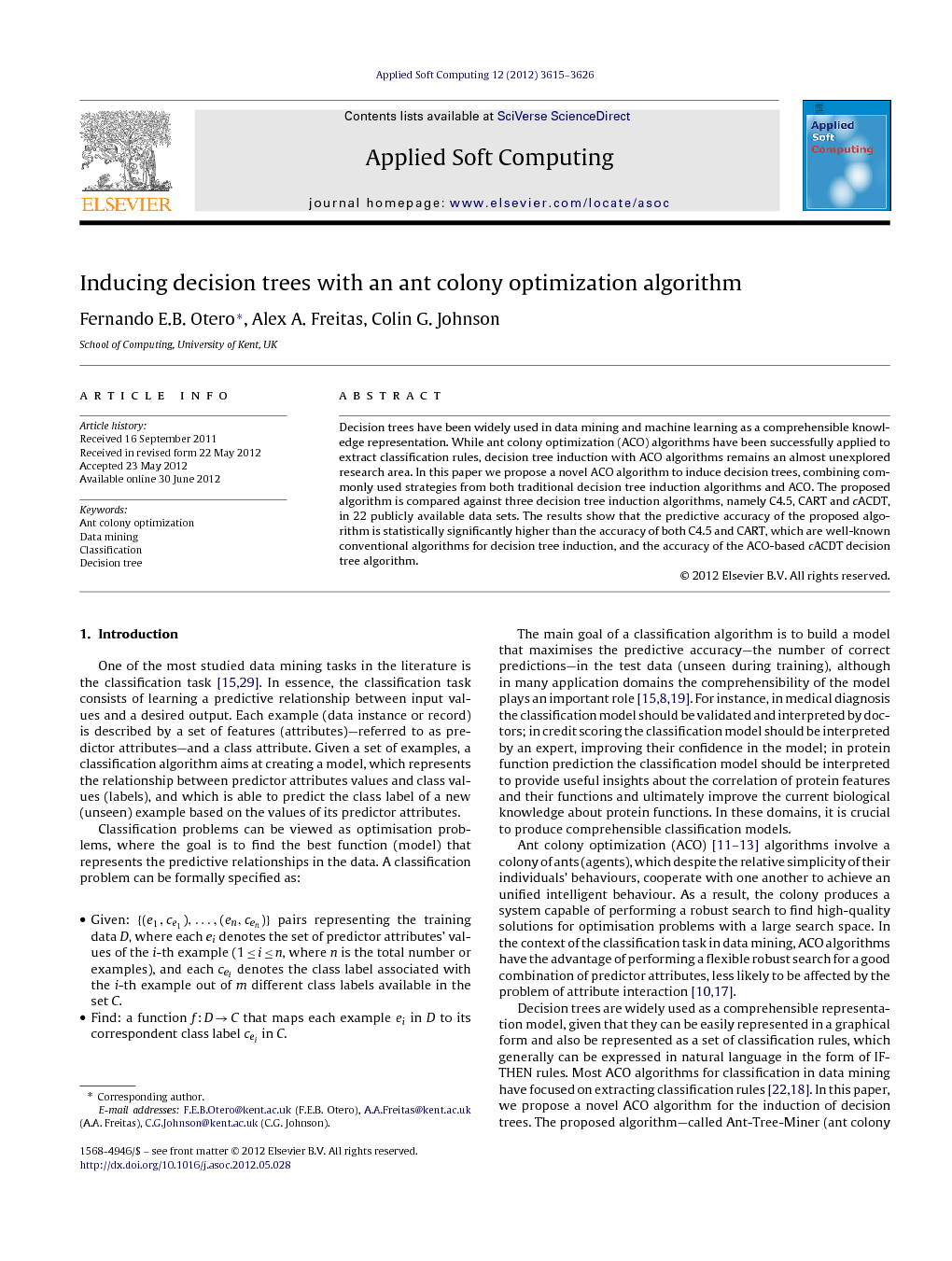 One of the most studied data mining tasks in the literature is the classification task [15] and [29]. In essence, the classification task consists of learning a predictive relationship between input values and a desired output. Each example (data instance or record) is described by a set of features (attributes)—referred to as predictor attributes—and a class attribute. Given a set of examples, a classification algorithm aims at creating a model, which represents the relationship between predictor attributes values and class values (labels), and which is able to predict the class label of a new (unseen) example based on the values of its predictor attributes. Classification problems can be viewed as optimisation problems, where the goal is to find the best function (model) that represents the predictive relationships in the data. A classification problem can be formally specified as: • Given: {(e1,ce1),…,(en,cen)}{(e1,ce1),…,(en,cen)} pairs representing the training data D, where each ei denotes the set of predictor attributes’ values of the i-th example (1 ≤ i ≤ n, where n is the total number or examples), and each ceicei denotes the class label associated with the i-th example out of m different class labels available in the set C. • Find: a function f : D → C that maps each example ei in D to its correspondent class label ceicei in C. The main goal of a classification algorithm is to build a model that maximises the predictive accuracy—the number of correct predictions—in the test data (unseen during training), although in many application domains the comprehensibility of the model plays an important role [15], [8] and [19]. For instance, in medical diagnosis the classification model should be validated and interpreted by doctors; in credit scoring the classification model should be interpreted by an expert, improving their confidence in the model; in protein function prediction the classification model should be interpreted to provide useful insights about the correlation of protein features and their functions and ultimately improve the current biological knowledge about protein functions. In these domains, it is crucial to produce comprehensible classification models. Ant colony optimization (ACO) [11], [12] and [13] algorithms involve a colony of ants (agents), which despite the relative simplicity of their individuals’ behaviours, cooperate with one another to achieve an unified intelligent behaviour. As a result, the colony produces a system capable of performing a robust search to find high-quality solutions for optimisation problems with a large search space. In the context of the classification task in data mining, ACO algorithms have the advantage of performing a flexible robust search for a good combination of predictor attributes, less likely to be affected by the problem of attribute interaction [10] and [17]. Decision trees are widely used as a comprehensible representation model, given that they can be easily represented in a graphical form and also be represented as a set of classification rules, which generally can be expressed in natural language in the form of IF-THEN rules. Most ACO algorithms for classification in data mining have focused on extracting classification rules [22] and [18]. In this paper, we propose a novel ACO algorithm for the induction of decision trees. The proposed algorithm—called Ant-Tree-Miner (ant colony optimization-based decision tree induction)—is compared against two well-known decision tree induction algorithms, namely C4.5 [31] and CART [6], and the ACO-based cACDT algorithm [5] in 22 publicly available data sets in terms of both predictive accuracy and size of the induced decision trees. The remainder of this paper is organised as follows. Section 2 presents the background of this paper, discussing the top-down strategy commonly used to induce decision trees, an overview of ant colony optimization (ACO) and the related work on ACO algorithms for induction of tree structures. The proposed algorithm is described in Section 3. The computational results are presented in Section 4. Finally, Section 5 concludes this paper and presents future research directions.