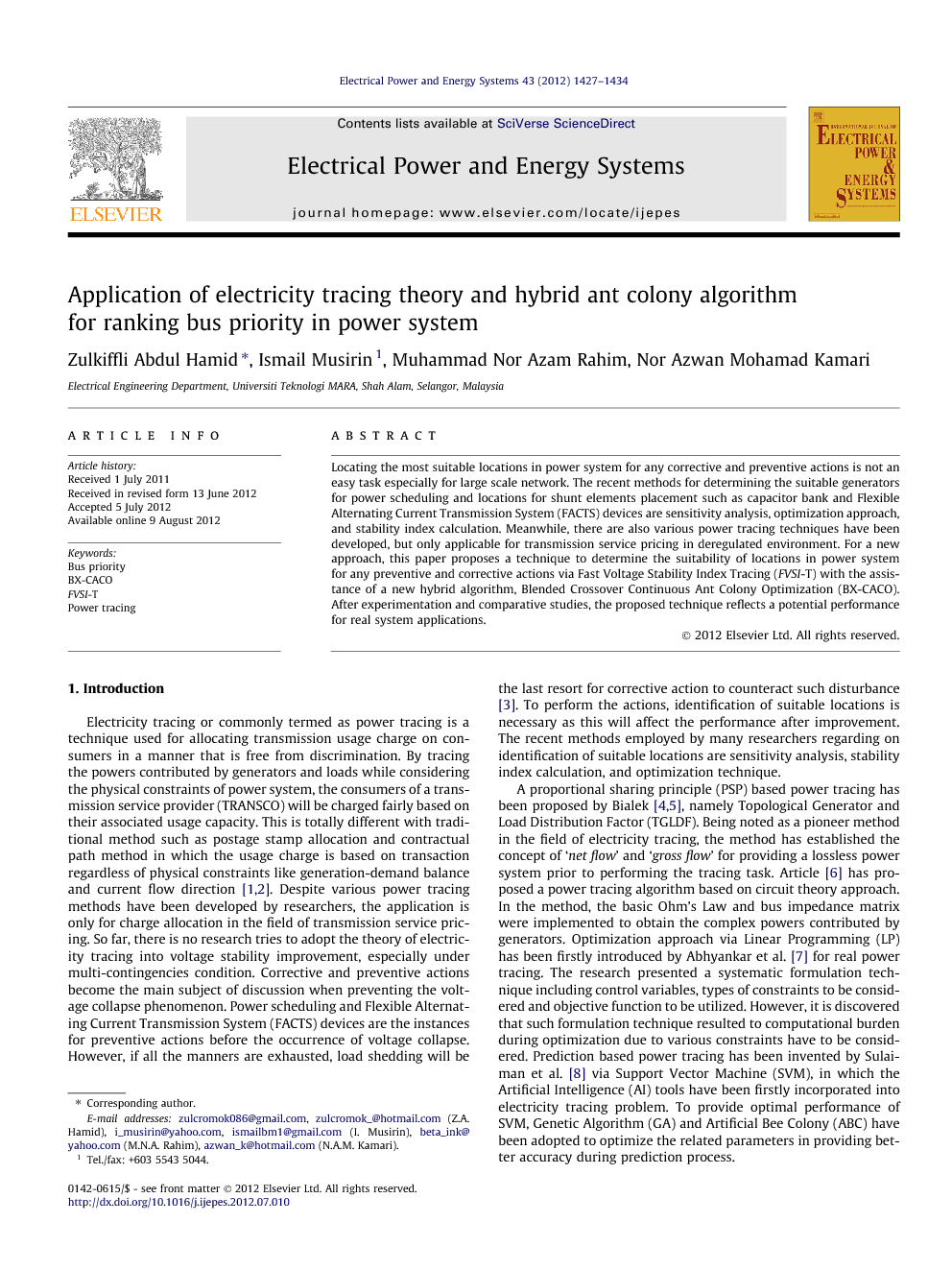 Locating the most suitable locations in power system for any corrective and preventive actions is not an easy task especially for large scale network. The recent methods for determining the suitable generators for power scheduling and locations for shunt elements placement such as capacitor bank and Flexible Alternating Current Transmission System (FACTS) devices are sensitivity analysis, optimization approach, and stability index calculation. Meanwhile, there are also various power tracing techniques have been developed, but only applicable for transmission service pricing in deregulated environment. For a new approach, this paper proposes a technique to determine the suitability of locations in power system for any preventive and corrective actions via Fast Voltage Stability Index Tracing (FVSI-T) with the assistance of a new hybrid algorithm, Blended Crossover Continuous Ant Colony Optimization (BX-CACO). After experimentation and comparative studies, the proposed technique reflects a potential performance for real system applications.

Electricity tracing or commonly termed as power tracing is a technique used for allocating transmission usage charge on consumers in a manner that is free from discrimination. By tracing the powers contributed by generators and loads while considering the physical constraints of power system, the consumers of a transmission service provider (TRANSCO) will be charged fairly based on their associated usage capacity. This is totally different with traditional method such as postage stamp allocation and contractual path method in which the usage charge is based on transaction regardless of physical constraints like generation-demand balance and current flow direction [1] and [2]. Despite various power tracing methods have been developed by researchers, the application is only for charge allocation in the field of transmission service pricing. So far, there is no research tries to adopt the theory of electricity tracing into voltage stability improvement, especially under multi-contingencies condition. Corrective and preventive actions become the main subject of discussion when preventing the voltage collapse phenomenon. Power scheduling and Flexible Alternating Current Transmission System (FACTS) devices are the instances for preventive actions before the occurrence of voltage collapse. However, if all the manners are exhausted, load shedding will be the last resort for corrective action to counteract such disturbance [3]. To perform the actions, identification of suitable locations is necessary as this will affect the performance after improvement. The recent methods employed by many researchers regarding on identification of suitable locations are sensitivity analysis, stability index calculation, and optimization technique. A proportional sharing principle (PSP) based power tracing has been proposed by Bialek [4] and [5], namely Topological Generator and Load Distribution Factor (TGLDF). Being noted as a pioneer method in the field of electricity tracing, the method has established the concept of ‘net flow’ and ‘gross flow’ for providing a lossless power system prior to performing the tracing task. Article [6] has proposed a power tracing algorithm based on circuit theory approach. In the method, the basic Ohm’s Law and bus impedance matrix were implemented to obtain the complex powers contributed by generators. Optimization approach via Linear Programming (LP) has been firstly introduced by Abhyankar et al. [7] for real power tracing. The research presented a systematic formulation technique including control variables, types of constraints to be considered and objective function to be utilized. However, it is discovered that such formulation technique resulted to computational burden during optimization due to various constraints have to be considered. Prediction based power tracing has been invented by Sulaiman et al. [8] via Support Vector Machine (SVM), in which the Artificial Intelligence (AI) tools have been firstly incorporated into electricity tracing problem. To provide optimal performance of SVM, Genetic Algorithm (GA) and Artificial Bee Colony (ABC) have been adopted to optimize the related parameters in providing better accuracy during prediction process. So far, the fastest convergence speed promoted by meta-heuristic optimization algorithm is the Ant Colony Optimization (ACO) which was firstly introduced by Dorigo and Stutzle [9]. In virtue of that, various researches have implemented ACO for solving problems either in business or technical fields. Article [10] proposed optimal reactive power pricing by incorporating ACO. In the research, the fitness has been formulated based on reactive power production cost and after experimentation, the algorithm provided fine improvement within tolerable computation time. Optimal economic dispatch via ACO has been proposed by Pothiya et al. [11] considering non-smooth cost function. To provide effective searching mechanism, the research introduced three additional techniques in ACO which are priority list, variable reduction, and zoom feature. It was justified that ACO has great capability to perform fast optimization with reliable solution concurrently. Other works that justified ACO performance can be accessed in [12] and [13]. Contrary to Dorigo’s ACO, a new version has been proposed by Socha and Dorigo [14] for continuous domain optimization, which is called as ACOR. This algorithm has great ability to perform continuous optimization problem like tuning or sizing while maintaining the fast convergence property of the original algorithm. The performance of ACOR has been validated in [15] and [16]. This paper presents a new technique for ranking the priority of buses in a power system to be used for any preventive and corrective actions, that is, by means of tracing the stability index contributed by generators and loads. The ranking list can be used by a system operator (SO) to select the most suitable locations for any countermeasures against power system disturbances like voltage collapse phenomenon. For more reliable results, Fast Voltage Stability Index (FVSI) has been selected as the index to be traced via a new hybrid optimization algorithm, namely Blended Crossover Continuous ACO (BX-CACO). The proposed algorithm has been formulated systematically in accordance to the developed tracing technique

To sum up, a new approach for ranking the priority of buses in a power system by means of power tracing technique has been proposed, namely FVSI-Tracing. The proposed technique consists of two schemes, which are FVSI-GT and FVSI-LT. For any countermeasures related to generators like power scheduling, FVSI-GT is applicable. On the other hand, FVSI-LT is suggested for any actions related to load buses, such as placement of FACTS devices and load shedding under contingencies. In performing both tracing schemes, a hybrid ant colony algorithm has been promoted, called as BX-CACO. It is revealed that BX-CACO based FVSI-Tracing is capable of providing reliable ranking list as other conventional methods such as sensitivity analysis. In addition, this algorithm is able to perform fast optimization process with good solution quality concurrently. Such discovery enhances the possibility of the proposed technique for real system applications concerning voltage stability.