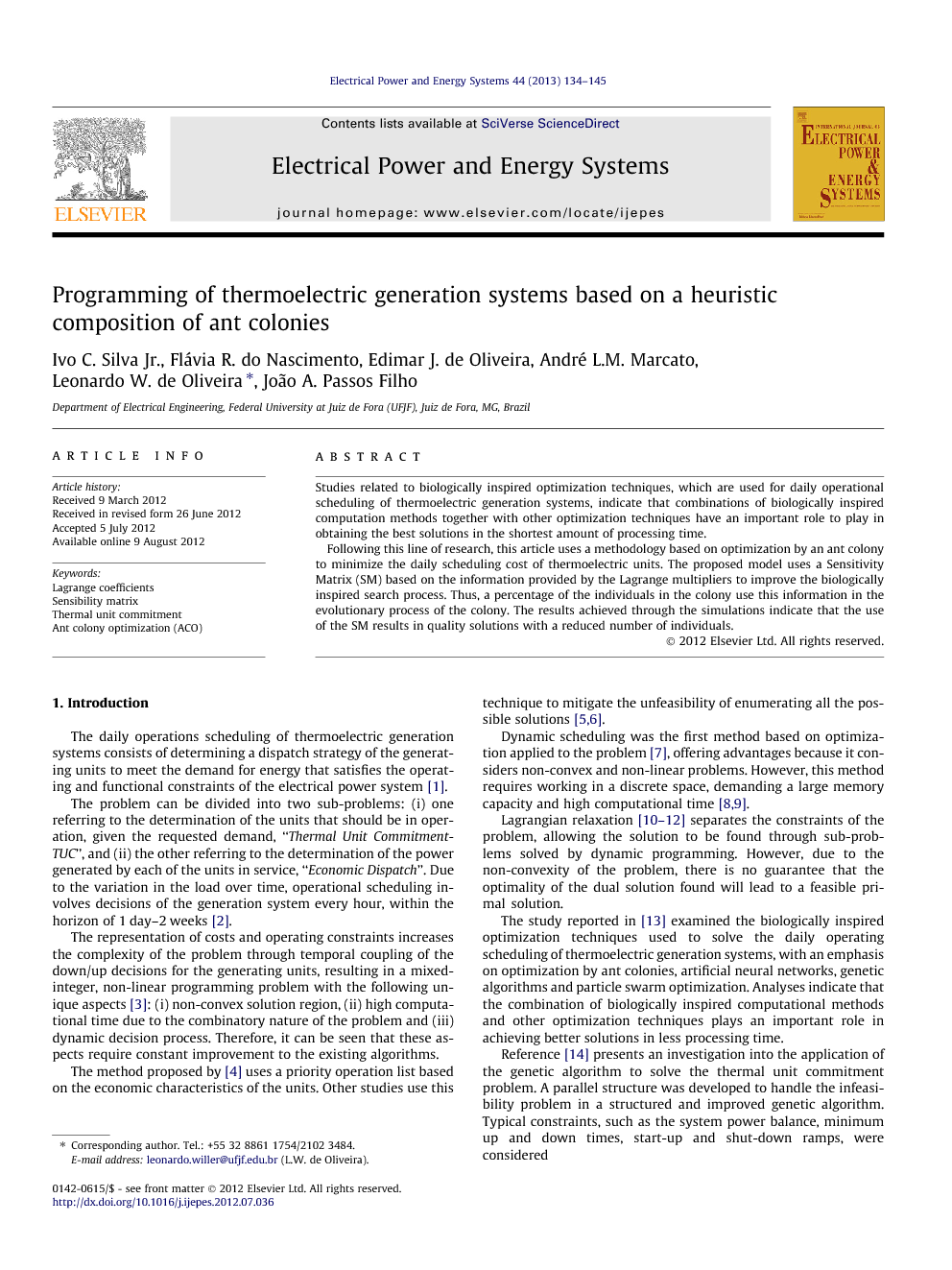 Studies related to biologically inspired optimization techniques, which are used for daily operational scheduling of thermoelectric generation systems, indicate that combinations of biologically inspired computation methods together with other optimization techniques have an important role to play in obtaining the best solutions in the shortest amount of processing time. Following this line of research, this article uses a methodology based on optimization by an ant colony to minimize the daily scheduling cost of thermoelectric units. The proposed model uses a Sensitivity Matrix (SM) based on the information provided by the Lagrange multipliers to improve the biologically inspired search process. Thus, a percentage of the individuals in the colony use this information in the evolutionary process of the colony. The results achieved through the simulations indicate that the use of the SM results in quality solutions with a reduced number of individuals.

The daily operations scheduling of thermoelectric generation systems consists of determining a dispatch strategy of the generating units to meet the demand for energy that satisfies the operating and functional constraints of the electrical power system [1]. The problem can be divided into two sub-problems: (i) one referring to the determination of the units that should be in operation, given the requested demand, “Thermal Unit Commitment-TUC”, and (ii) the other referring to the determination of the power generated by each of the units in service, “Economic Dispatch”. Due to the variation in the load over time, operational scheduling involves decisions of the generation system every hour, within the horizon of 1 day–2 weeks [2]. The representation of costs and operating constraints increases the complexity of the problem through temporal coupling of the down/up decisions for the generating units, resulting in a mixed-integer, non-linear programming problem with the following unique aspects [3]: (i) non-convex solution region, (ii) high computational time due to the combinatory nature of the problem and (iii) dynamic decision process. Therefore, it can be seen that these aspects require constant improvement to the existing algorithms. The method proposed by [4] uses a priority operation list based on the economic characteristics of the units. Other studies use this technique to mitigate the unfeasibility of enumerating all the possible solutions [5] and [6]. Dynamic scheduling was the first method based on optimization applied to the problem [7], offering advantages because it considers non-convex and non-linear problems. However, this method requires working in a discrete space, demanding a large memory capacity and high computational time [8] and [9]. Lagrangian relaxation [10], [11] and [12] separates the constraints of the problem, allowing the solution to be found through sub-problems solved by dynamic programming. However, due to the non-convexity of the problem, there is no guarantee that the optimality of the dual solution found will lead to a feasible primal solution. The study reported in [13] examined the biologically inspired optimization techniques used to solve the daily operating scheduling of thermoelectric generation systems, with an emphasis on optimization by ant colonies, artificial neural networks, genetic algorithms and particle swarm optimization. Analyses indicate that the combination of biologically inspired computational methods and other optimization techniques plays an important role in achieving better solutions in less processing time. Reference [14] presents an investigation into the application of the genetic algorithm to solve the thermal unit commitment problem. A parallel structure was developed to handle the infeasibility problem in a structured and improved genetic algorithm. Typical constraints, such as the system power balance, minimum up and down times, start-up and shut-down ramps, were considered Differential evolution based approaches have also been applied to short-term electrical power generation scheduling [15]. In this reference, a new way of applying a differential evolution algorithm, which comprises the search procedure involving binary decision variables and the power dispatch calculation in a unique problem, is proposed. This approach eliminates the use of an iterative local search technique in all solution evaluations. In [16], a hybrid Taguchi–Immune algorithm, which integrates the Taguchi method and the traditional immune algorithm, is presented to consider the unit commitment problem. The Taguchi method is incorporated in the crossover operations to select the better gene for achieving crossover, consequently enhancing the immune algorithm. A simulated annealing embedded evolutionary programming approach is presented in [17] to solve the hydro-thermal unit commitment problem. The objective is to determine the generation scheduling such that the total operating cost can be minimized when subjected to a variety of constraints. Following this line of research, the objective of this paper is to present an improvement in the ant colony optimization (ACO) evolution process for application to the daily operation planning problem for thermoelectric generation units. The results obtained will be evaluated through the simulation of systems that are widely described in the literature.

The results reached through the simulations performed demonstrate the satisfactory efficiency of the methodology proposed for the problem of the operational programming of thermoelectric generation systems. For the cases analyzed, the proposed methodology required an acceptable computational effort, which provided optimal and suboptimal solutions. The results obtained can be credited to the following factors: (i) the economic data coming from the Lagrange multipliers, associated with operation decision functions in the identification of the generating units to be made operational and incorporated into the bio-inspired search process and (ii) the acquisition of the lower limit of cost, which tends to drive the solutions to a more promising solution region when introduced to determine the amount of pheromone to be deposited by the colony. Regarding the analysis of the results: (i) The proposed method is shown to be competitive in relation to the main optimization techniques used to solve the problem at hand, combining quality solutions and acceptable computational effort. (ii) The majority of time, the comparison of the results shows very small financial percentage differences between the methodologies, and there are even alternations of performance (quality of the solutions) for different systems. (iii) Despite the small economic differences between the methodologies, it should be kept in mind that, for real and/or large systems, the amount of money involved is large, and therefore, any savings that are obtained are welcome. (iv) The guarantee of obtaining the global minimum point can only be attained by enumerating all possible combinations of operation, which is not always possible due to the high processing time. (v) Despite the good performance obtained by the proposed sensitivity index, it should be kept in mind that there is no guarantee of optimality for the solutions; that is, similar to other methodologies, the proposed index may produce suboptimal solutions.