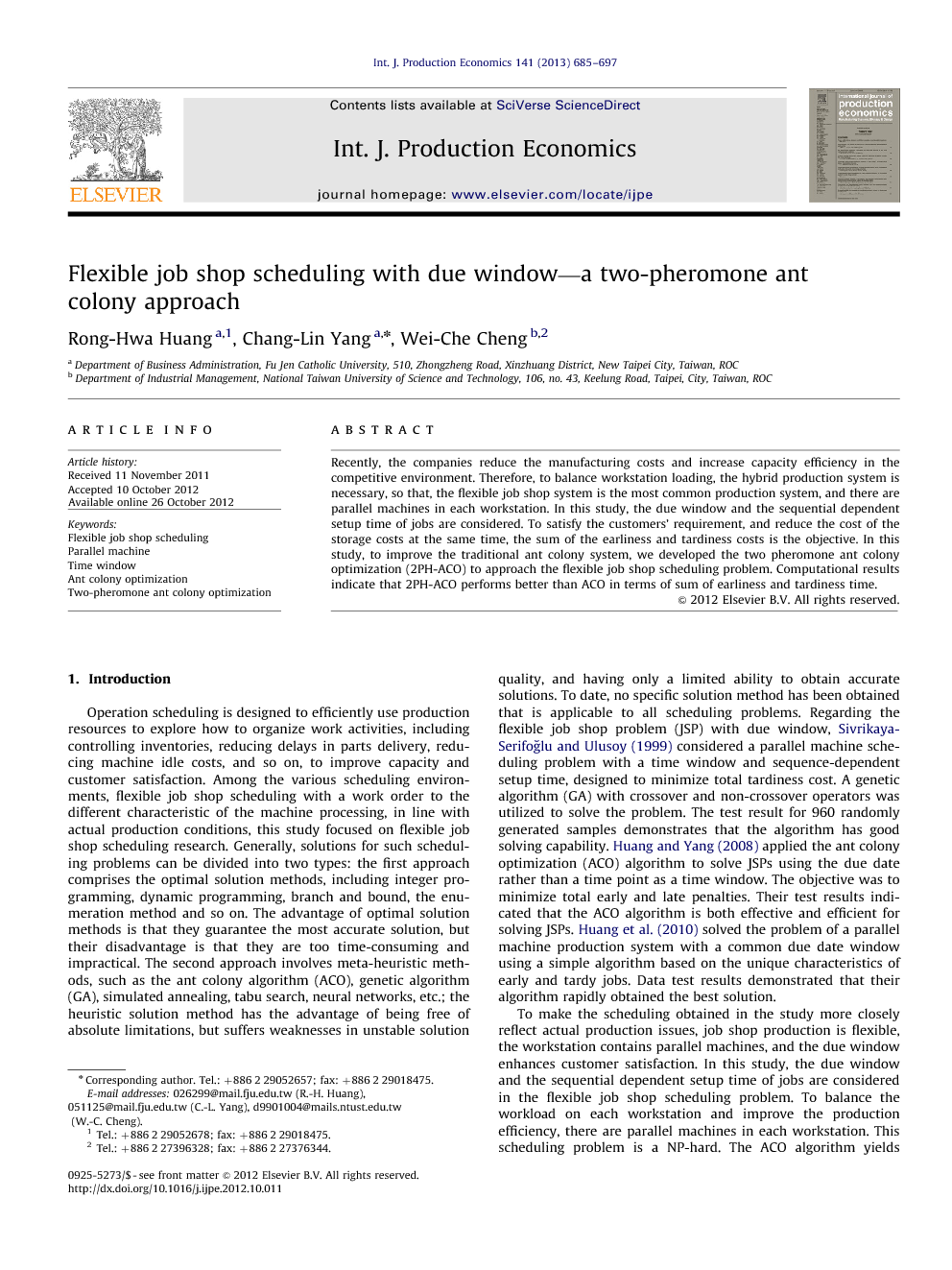 Recently, the companies reduce the manufacturing costs and increase capacity efficiency in the competitive environment. Therefore, to balance workstation loading, the hybrid production system is necessary, so that, the flexible job shop system is the most common production system, and there are parallel machines in each workstation. In this study, the due window and the sequential dependent setup time of jobs are considered. To satisfy the customers’ requirement, and reduce the cost of the storage costs at the same time, the sum of the earliness and tardiness costs is the objective. In this study, to improve the traditional ant colony system, we developed the two pheromone ant colony optimization (2PH-ACO) to approach the flexible job shop scheduling problem. Computational results indicate that 2PH-ACO performs better than ACO in terms of sum of earliness and tardiness time.

Operation scheduling is designed to efficiently use production resources to explore how to organize work activities, including controlling inventories, reducing delays in parts delivery, reducing machine idle costs, and so on, to improve capacity and customer satisfaction. Among the various scheduling environments, flexible job shop scheduling with a work order to the different characteristic of the machine processing, in line with actual production conditions, this study focused on flexible job shop scheduling research. Generally, solutions for such scheduling problems can be divided into two types: the first approach comprises the optimal solution methods, including integer programming, dynamic programming, branch and bound, the enumeration method and so on. The advantage of optimal solution methods is that they guarantee the most accurate solution, but their disadvantage is that they are too time-consuming and impractical. The second approach involves meta-heuristic methods, such as the ant colony algorithm (ACO), genetic algorithm (GA), simulated annealing, tabu search, neural networks, etc.; the heuristic solution method has the advantage of being free of absolute limitations, but suffers weaknesses in unstable solution quality, and having only a limited ability to obtain accurate solutions. To date, no specific solution method has been obtained that is applicable to all scheduling problems. Regarding the flexible job shop problem (JSP) with due window, Sivrikaya-Serifoğlu and Ulusoy (1999) considered a parallel machine scheduling problem with a time window and sequence-dependent setup time, designed to minimize total tardiness cost. A genetic algorithm (GA) with crossover and non-crossover operators was utilized to solve the problem. The test result for 960 randomly generated samples demonstrates that the algorithm has good solving capability. Huang and Yang (2008) applied the ant colony optimization (ACO) algorithm to solve JSPs using the due date rather than a time point as a time window. The objective was to minimize total early and late penalties. Their test results indicated that the ACO algorithm is both effective and efficient for solving JSPs. Huang et al. (2010) solved the problem of a parallel machine production system with a common due date window using a simple algorithm based on the unique characteristics of early and tardy jobs. Data test results demonstrated that their algorithm rapidly obtained the best solution. To make the scheduling obtained in the study more closely reflect actual production issues, job shop production is flexible, the workstation contains parallel machines, and the due window enhances customer satisfaction. In this study, the due window and the sequential dependent setup time of jobs are considered in the flexible job shop scheduling problem. To balance the workload on each workstation and improve the production efficiency, there are parallel machines in each workstation. This scheduling problem is a NP-hard. The ACO algorithm yields excellent outcomes for such a scheduling problem (Hani et al., 2007 and Huang and Liao, 2008). However, the ACO algorithm suffers limitations owing to the varying problem characteristics. In response to these limitations, numerous improvements to the ACO algorithm have been developed. Song et al. (2006) combined GA and ACO algorithms to solve a fuzzy JSP. Their test results demonstrated that GA-ACO has superior ability to solve GA and ACO alone. Furthermore, Zhao et al. (2008) proposed an improved ACO algorithm with an embedded GA to solve the traveling salesman problem (TSP). The GA was used to identify the most feasible and best solutions, and the ACO algorithm was then applied to identify the optimal solution. Experimental results showed that the proposed ACO algorithm obtained better solutions for benchmark instances within fewer iteration than existing ACO algorithms. Zhang et al. (2008) proposed a hybrid ACO with a Differential Evolution (DEACO) algorithm. In the DEACO algorithm, DE was applied to optimize the pheromone trail in the basic ACO model. The proposed algorithm was tested on the TSP. Experimental results demonstrated that the DEACO algorithm is a feasible and effective ACO model for solving complex optimization problems. Van Ast et al. (2009) introduced a fuzzy ACO algorithm for automated design of optimal control policies for continuous-state dynamic systems. The fuzzy ACO algorithm integrates the multi-agent optimization heuristic of the ACO algorithm with fuzzy partitioning of the system state space. Finally, a simulated control problem was solved to demonstrate the efficacy of the proposed algorithm. This study proposes a modified ACO algorithm named two-pheromone ant colony optimization (2PH-ACO) which adds the second pheromone group to the ant system in order to solve the scheduling problem faster. This algorithm is expected to improve the solving ability of the traditional ant colony algorithm, and to provide an important tool for future use.

The current recessionary economic environment forces enterprises to find ways to survive. Reducing unnecessary spending to decrease operating costs is the main means of survival for most enterprises. Good scheduling approaches can achieve cost reductions. Such scheduling approaches seek to reduce completion time, decrease storage space requirements, increase equipment utilization, and avoid penalties for failing to fulfill orders. The flexible job shop production system is a highly complex production system that considers a maturity dependent time window and involves setup time. This study thus proposes an effective and robust scheduling approach named 2PH-ACO for a flexible job shop production system. The objective of the scheduling problem is to minimize the sum of weighted earliness and tardiness. The 2PH-ACO approach was compared with integer programming and the traditional ACO algorithm, as summarized below In the simulated testing data, both 2PH-ACO and traditional ACO algorithms demonstrate good solving efficiency. Improved effectiveness in solving small-scale problems. The 2PH-ACO displays a 67.25% improvement in its rate of effectiveness, illustrating that 2PH-ACO outperforms traditional ACO in problem solving ability. In terms of improving robustness, the t-test for systems mean and F-test for system variance of 2PH-ACO and the traditional ACO approach show little difference in stability. However, regarding problem solving efficiency, 2PH-ACO outperforms the traditional ACO approach. Summarizing the above conclusions, 2PH-ACO outperforms traditional ACO in solving scheduling problems. The 2PH-ACO is worth applying to real world production systems to fit customer time requirements and reduce operating time.