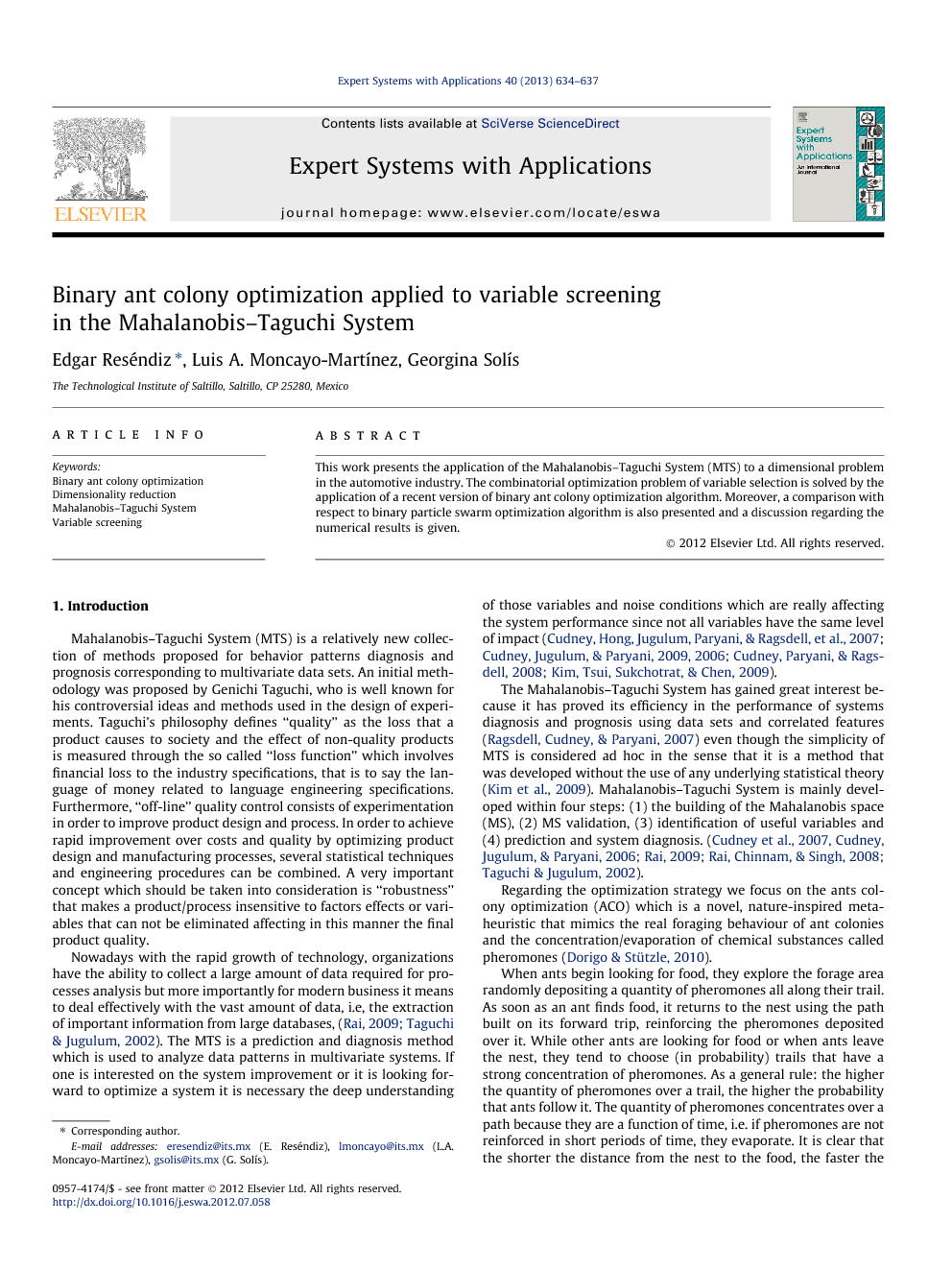 Mahalanobis–Taguchi System (MTS) is a relatively new collection of methods proposed for behavior patterns diagnosis and prognosis corresponding to multivariate data sets. An initial methodology was proposed by Genichi Taguchi, who is well known for his controversial ideas and methods used in the design of experiments. Taguchi’s philosophy defines “quality” as the loss that a product causes to society and the effect of non-quality products is measured through the so called “loss function” which involves financial loss to the industry specifications, that is to say the language of money related to language engineering specifications. Furthermore, “off-line” quality control consists of experimentation in order to improve product design and process. In order to achieve rapid improvement over costs and quality by optimizing product design and manufacturing processes, several statistical techniques and engineering procedures can be combined. A very important concept which should be taken into consideration is “robustness” that makes a product/process insensitive to factors effects or variables that can not be eliminated affecting in this manner the final product quality. Nowadays with the rapid growth of technology, organizations have the ability to collect a large amount of data required for processes analysis but more importantly for modern business it means to deal effectively with the vast amount of data, i.e, the extraction of important information from large databases, (Rai, 2009 and Taguchi and Jugulum, 2002). The MTS is a prediction and diagnosis method which is used to analyze data patterns in multivariate systems. If one is interested on the system improvement or it is looking forward to optimize a system it is necessary the deep understanding of those variables and noise conditions which are really affecting the system performance since not all variables have the same level of impact (Cudney, Hong, Jugulum, Paryani, & Ragsdell, et al., 2007; Cudney et al., 2009, Cudney et al., 2006, Cudney et al., 2008 and Kim et al., 2009). The Mahalanobis–Taguchi System has gained great interest because it has proved its efficiency in the performance of systems diagnosis and prognosis using data sets and correlated features (Ragsdell, Cudney, & Paryani, 2007) even though the simplicity of MTS is considered ad hoc in the sense that it is a method that was developed without the use of any underlying statistical theory (Kim et al., 2009). Mahalanobis–Taguchi System is mainly developed within four steps: (1) the building of the Mahalanobis space (MS), (2) MS validation, (3) identification of useful variables and (4) prediction and system diagnosis. (Cudney et al., 2007, Cudney et al., 2006, Rai, 2009, Rai et al., 2008 and Taguchi and Jugulum, 2002). Regarding the optimization strategy we focus on the ants colony optimization (ACO) which is a novel, nature-inspired meta-heuristic that mimics the real foraging behaviour of ant colonies and the concentration/evaporation of chemical substances called pheromones (Dorigo & Stützle, 2010). When ants begin looking for food, they explore the forage area randomly depositing a quantity of pheromones all along their trail. As soon as an ant finds food, it returns to the nest using the path built on its forward trip, reinforcing the pheromones deposited over it. While other ants are looking for food or when ants leave the nest, they tend to choose (in probability) trails that have a strong concentration of pheromones. As a general rule: the higher the quantity of pheromones over a trail, the higher the probability that ants follow it. The quantity of pheromones concentrates over a path because they are a function of time, i.e. if pheromones are not reinforced in short periods of time, they evaporate. It is clear that the shorter the distance from the nest to the food, the faster the ants complete the tour, thus the concentration of pheromones is higher in short trails than in long ones. As pheromones over long trails are not reinforced at the same rate, they evaporate. As in real ants, the artificial ones (A), also called agents, cooperate to find solutions to hard combinatorial problems by reacting to changes in their environment using an indirect communication process based on artificial pheromones (τ), thus near – and optimum solutions emerge from agent’s cooperative interaction. The problem to be solved is represented by a graph in which the pheromones are deposited over the set of either vertices or edges. An initial and a final condition represent the nest and the food, respectively. Ants build a solution by stepping from vertex to vertex based on: (a) a probabilistic decision rule that is a function of the quantity of τ over either vertices or edges and the heuristic information (η) which is a source of information that is not related to ants’ parameters and gives A the opportunity of exploiting the specific knowledge of the problem; and (b) the set of problem constraints. The ACO meta-heuristic has three basic procedures that can take place simultaneously or one at a time. The first procedure is the Construct Ant Solution which allows A to build a solution, i.e. A travels around a graph which represents the problem. They know they have to stop travelling when the final condition is reached. The Apply Local Search is the second sub-process. This is optional and aims to improve the ant’s solution by applying a local search. Finally, in the third procedure called Update Pheromones, the pheromones trails are reinforced according to the solution’s “quality” and are evaporated by an evaporation factor (ρ) to avoid stagnation due to an indiscriminate concentration of pheromones.

We have implemented and applied hybrid MTS methodology using recent binary version of particle swarm optimization as well as ants colony intelligence. Furthermore, we have successfully reduced the number of dimensional variables to be monitored although further investigations should be done in order to study the practical impact when different influencing variables combinations are chosen. Moreover, to the authors knowledge this is the first time that binary ants colony optimization is used to solve the screening variable problem in Mahalanobis–Taguchi System and compared to the already proposed BPSO. We found that for this problem the binary ants colony algorithm is slower in comparison with BPSO. However it might be possible that NBACO performs more efficiently for some other problems since BPSO tends to be localized.