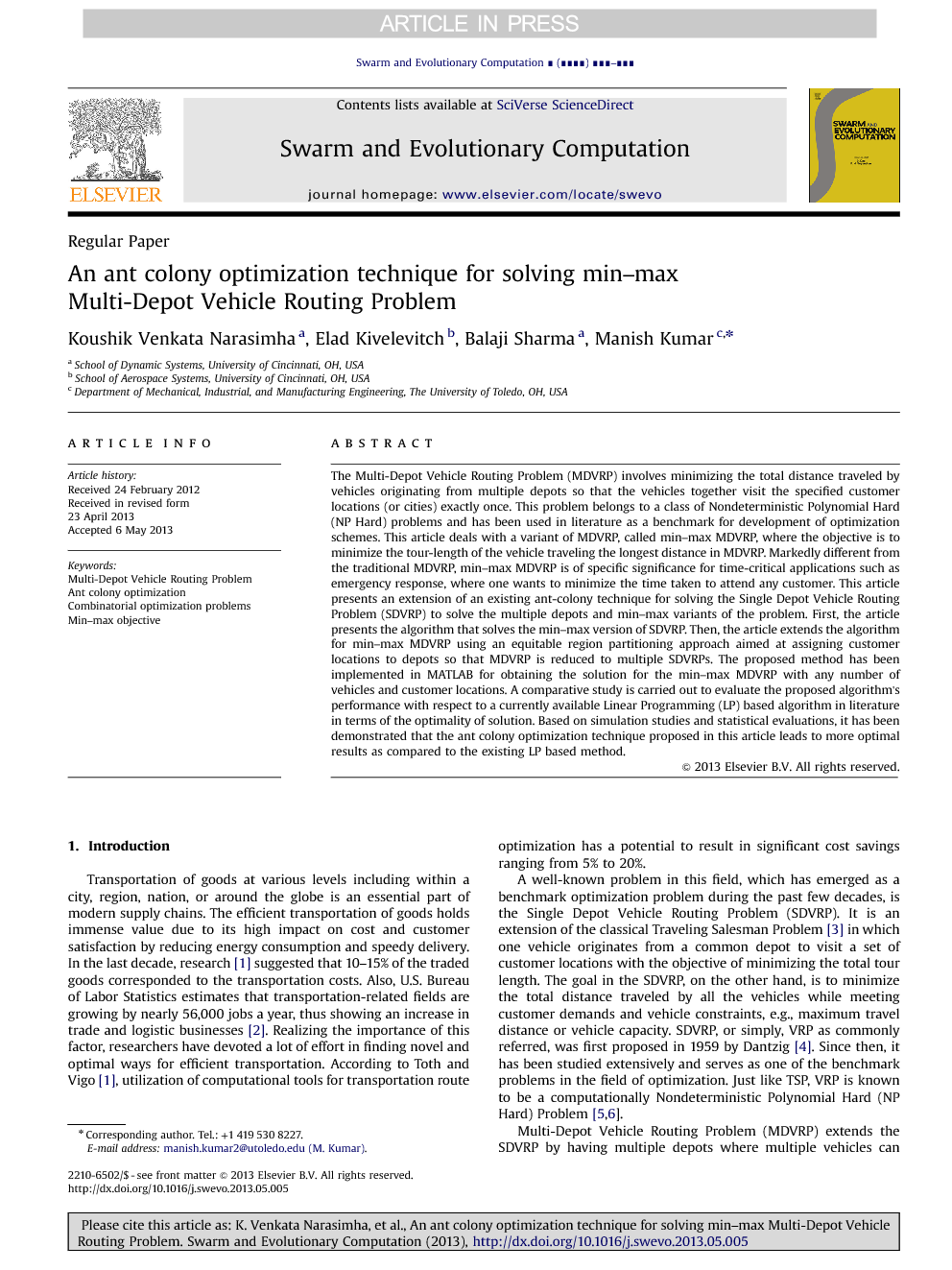 The Multi-Depot Vehicle Routing Problem (MDVRP) involves minimizing the total distance traveled by vehicles originating from multiple depots so that the vehicles together visit the specified customer locations (or cities) exactly once. This problem belongs to a class of Nondeterministic Polynomial Hard (NP Hard) problems and has been used in literature as a benchmark for development of optimization schemes. This article deals with a variant of MDVRP, called min–max MDVRP, where the objective is to minimize the tour-length of the vehicle traveling the longest distance in MDVRP. Markedly different from the traditional MDVRP, min–max MDVRP is of specific significance for time-critical applications such as emergency response, where one wants to minimize the time taken to attend any customer. This article presents an extension of an existing ant-colony technique for solving the Single Depot Vehicle Routing Problem (SDVRP) to solve the multiple depots and min–max variants of the problem. First, the article presents the algorithm that solves the min–max version of SDVRP. Then, the article extends the algorithm for min–max MDVRP using an equitable region partitioning approach aimed at assigning customer locations to depots so that MDVRP is reduced to multiple SDVRPs. The proposed method has been implemented in MATLAB for obtaining the solution for the min–max MDVRP with any number of vehicles and customer locations. A comparative study is carried out to evaluate the proposed algorithm's performance with respect to a currently available Linear Programming (LP) based algorithm in literature in terms of the optimality of solution. Based on simulation studies and statistical evaluations, it has been demonstrated that the ant colony optimization technique proposed in this article leads to more optimal results as compared to the existing LP based method.

The paper presents an approximate solution to the min–max MDVRP based on an ant colony optimization. Unlike the traditional MDVRP, which minimizes the total distance traveled, the min–max MDVRP minimizes the maximal distance traveled by a vehicle. This variant of the problem holds special relevance for time-critical problems. The approach is based on decomposing the overall problem into several min–max SDVRPs via equitable partitioning of the region consisting of depots and cities. The min–max SDVRP is then solved using the ant colony method that finds out the minimum value of distance constraint that yields a solution to the traditional SDVRP. This optimal distance constraint, when used in a traditional SDVRP, minimizes the maximal distance traveled by a vehicle. Simulation studies and statistical tests validate the effectiveness of the proposed method and demonstrate that the proposed approach provides improvements in terms of optimality of the solution as compared to one of the best known methods in literature. Furthermore, the proposed ant colony based method provides much consistent solution over different runs showing convergence of the solution to a small neighborhood. Future work includes developing region-partitioning techniques for cases where we have non-uniform distribution or smaller number of cities. Further attempt should be made to implement the inherently distributed ant colony based method in a parallel computing framework, thus fully utilizing its potential. Additionally, an evaluation of the performance of various local search algorithms to complement the proposed ant based method for the min–max MDVRP would be an interesting direction for future work.