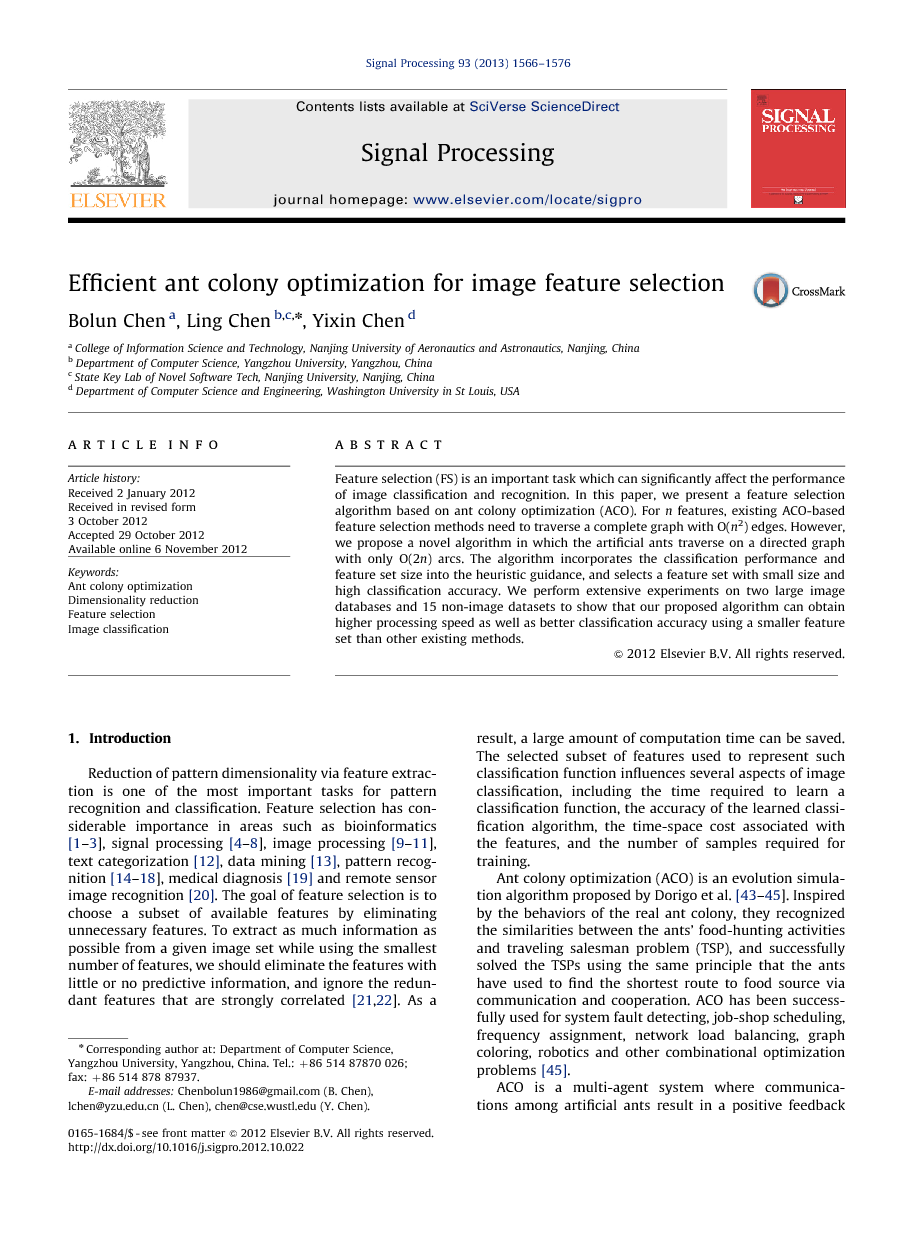 Reduction of pattern dimensionality via feature extraction is one of the most important tasks for pattern recognition and classification. Feature selection has considerable importance in areas such as bioinformatics [1], [2] and [3], signal processing [4], [5], [6], [7] and [8], image processing [9], [10] and [11], text categorization [12], data mining [13], pattern recognition [14], [15], [16], [17] and [18], medical diagnosis [19] and remote sensor image recognition [20]. The goal of feature selection is to choose a subset of available features by eliminating unnecessary features. To extract as much information as possible from a given image set while using the smallest number of features, we should eliminate the features with little or no predictive information, and ignore the redundant features that are strongly correlated [21] and [22]. As a result, a large amount of computation time can be saved. The selected subset of features used to represent such classification function influences several aspects of image classification, including the time required to learn a classification function, the accuracy of the learned classification algorithm, the time-space cost associated with the features, and the number of samples required for training. Ant colony optimization (ACO) is an evolution simulation algorithm proposed by Dorigo et al. [43], [44] and [45]. Inspired by the behaviors of the real ant colony, they recognized the similarities between the ants' food-hunting activities and traveling salesman problem (TSP), and successfully solved the TSPs using the same principle that the ants have used to find the shortest route to food source via communication and cooperation. ACO has been successfully used for system fault detecting, job-shop scheduling, frequency assignment, network load balancing, graph coloring, robotics and other combinational optimization problems [45]. ACO is a multi-agent system where communications among artificial ants result in a positive feedback behavior to guide the ant colony to converge to the optimal solution. Pheromone information, which simulates the chemical substance the real ants lay on the route they passed, is assigned to the edges of the graph. Artificial ants are used in ACO to travel in the graph to search for optimal paths according to the pheromone and problem-specific local heuristics information. The pheromone on each edge is evaporated at a certain rate at each iteration. It is also updated according to the quality of the paths containing this edge. Artificial ants are usually associated with a list that records their previous actions, and they may apply some additional operations such as local search, crossover and mutation, to improve the quality of the results obtained. Compared with GA, ACO has some advantages such as allowing positive feedback, distributed computing, and constructive greedy heuristic search. In recent years, some ACO based methods for feature selecting are reported. Basiri et al. [1] used ACO to select features for predicting post-synaptic activity in proteins. Nemati et al. [6] proposed an ACO based algorithm to reduce features size in automatic speaker verification. Aghdam et al. [12] proposed an ACO based feature selecting algorithm for text categorization. Kanan et al. [15] also presented an improved ACO algorithm for feature selection in face recognition. Their algorithm can select the optimal feature subset in terms of shortest feature length and the best performance of classifier. Vieira et al. [37] proposed an algorithm for feature selection based on two cooperative ant colonies, which minimizes two objectives: the number of features and the classification error. Two pheromone matrices and two different heuristics are used for these objectives. Subbotin [39] presented a modified ACO algorithm for feature selection. Akarsu et al. [46] proposed a hybrid modeling approach based on ACO for clustering and feature selection. In some methods for feature selection, ACO is also combined with other methods to improve the quality of feature selection and classification. Huang [38] presented a hybrid ACO-based classifier model that combines ACO and support vector machines (SVM) to improve classification accuracy with a small and appropriate feature subset. To simultaneously optimize the feature subset and the SVM kernel parameters, the feature importance and the pheromones are used to determine the transition probability; the classification accuracy and the weight vector of the feature provided by the SVM classifier are both considered to update the pheromone. Based on ACO and rough sets, Chen et al. [47] proposed an approach to feature selection which adopts mutual information based feature significance as heuristic information. In their algorithm the artificial ants start their tour from the feature core, which changes the complete graph to a smaller one. Sivagaminathan et al. [48] presented a hybrid method based on ACO and artificial neural networks to address feature selection. In most ACO-based feature selection methods, the nodes in the graph are used to represent the features. Ants traverse on the graph to look for a path containing part of the nodes which indicate the features selected. For n features, most ACO-based feature selection methods use a complete graph with O(n2) edges. This means that O(n2) pheromone and heuristic information will be computed and stored. In this paper, we present an ACO-based feature selection algorithm, ACOFS, to reduce the memory requirement and computation time. In this algorithm, the artificial ants traverse on a directed graph with only 2n arcs. The algorithm uses classifier performance and feature set size to guide search, and optimizes the feature set in terms of its size and classifier performance. Experimental results on large image and non-image datasets show that the proposed algorithm has superior performance. Compared with other existing algorithms, our algorithm can obtain higher processing speed and classification accuracy with a smaller feature set. The rest of the paper is organized as follows. Section 2 reviews related work on feature selection. Section 3 presents the proposed ACO based algorithm, ACOFS, for feature selection. Section 4 describes the implementation details of ACOFS. Section 5 shows and analyzes the experimental results obtained by ACOFS and compares the performance with other similar methods. Section 6 draws conclusions.

Image feature selection is an important task which can significantly affect the performance of image classification and recognition. In this paper, we have presented a feature selection algorithm, ACOFS, based on ant colony optimization. For n features, most existing ACO-based feature selection methods use a complete graph with O(n2) edges. The proposed ACOFS algorithm, in contrast, uses artificial ants to traverse on a directed graph with only O(2n) arcs. The ACOFS algorithm guides its search by incorporating classifier performance and feature set size into the heuristic function, and selects a small feature set with high classification accuracy. The experimental results on two well-known image datasets and 15 non-image datasets have shown that the proposed ACOFS algorithm can obtain higher processing speed as well as better classification recall and precision rates using a smaller feature set than other related methods.