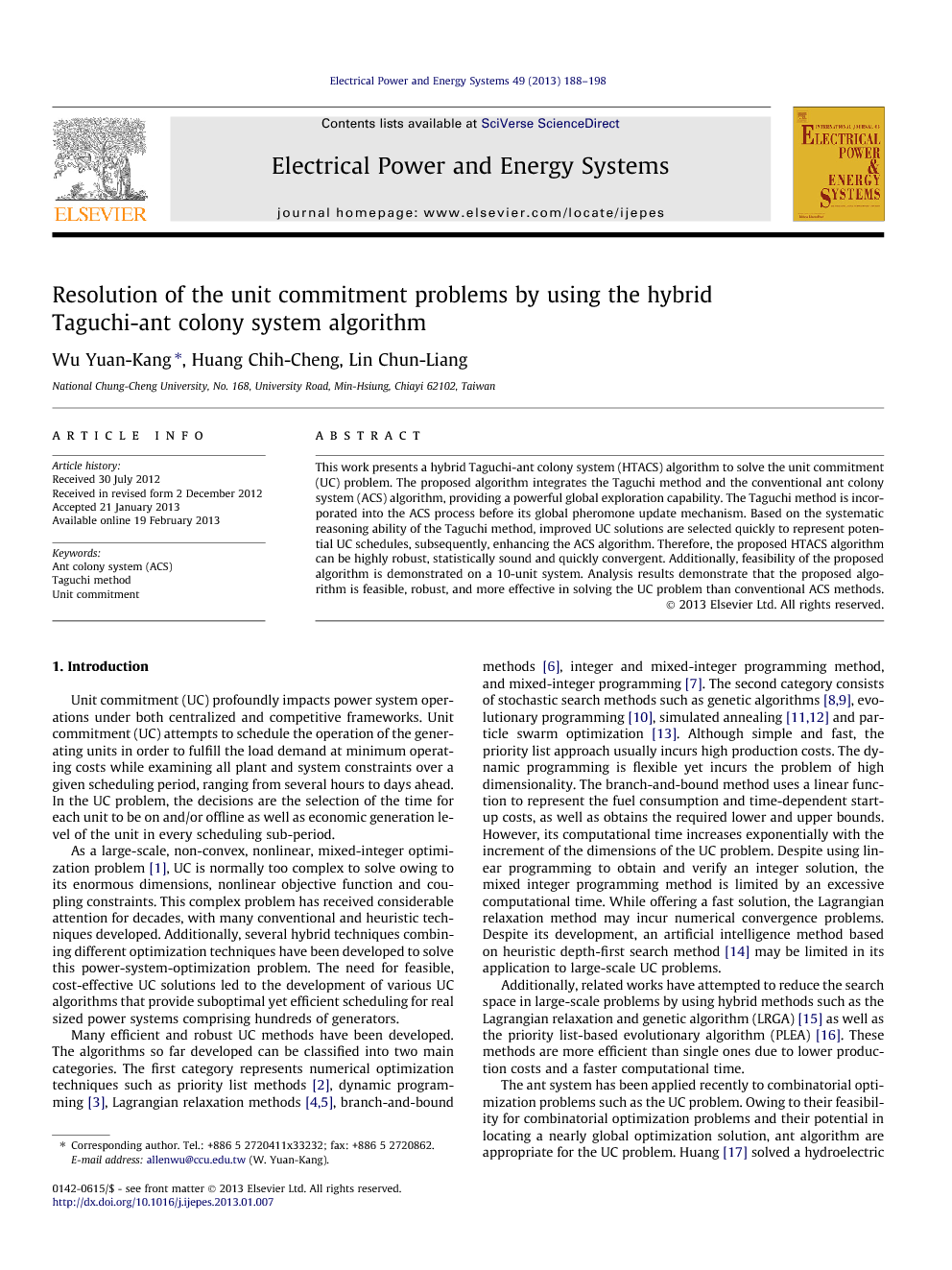 This work presents a hybrid Taguchi-ant colony system (HTACS) algorithm to solve the unit commitment (UC) problem. The proposed algorithm integrates the Taguchi method and the conventional ant colony system (ACS) algorithm, providing a powerful global exploration capability. The Taguchi method is incorporated into the ACS process before its global pheromone update mechanism. Based on the systematic reasoning ability of the Taguchi method, improved UC solutions are selected quickly to represent potential UC schedules, subsequently, enhancing the ACS algorithm. Therefore, the proposed HTACS algorithm can be highly robust, statistically sound and quickly convergent. Additionally, feasibility of the proposed algorithm is demonstrated on a 10-unit system. Analysis results demonstrate that the proposed algorithm is feasible, robust, and more effective in solving the UC problem than conventional ACS methods.

Unit commitment (UC) profoundly impacts power system operations under both centralized and competitive frameworks. Unit commitment (UC) attempts to schedule the operation of the generating units in order to fulfill the load demand at minimum operating costs while examining all plant and system constraints over a given scheduling period, ranging from several hours to days ahead. In the UC problem, the decisions are the selection of the time for each unit to be on and/or offline as well as economic generation level of the unit in every scheduling sub-period. As a large-scale, non-convex, nonlinear, mixed-integer optimization problem [1], UC is normally too complex to solve owing to its enormous dimensions, nonlinear objective function and coupling constraints. This complex problem has received considerable attention for decades, with many conventional and heuristic techniques developed. Additionally, several hybrid techniques combining different optimization techniques have been developed to solve this power-system-optimization problem. The need for feasible, cost-effective UC solutions led to the development of various UC algorithms that provide suboptimal yet efficient scheduling for real sized power systems comprising hundreds of generators. Many efficient and robust UC methods have been developed. The algorithms so far developed can be classified into two main categories. The first category represents numerical optimization techniques such as priority list methods [2], dynamic programming [3], Lagrangian relaxation methods [4] and [5], branch-and-bound methods [6], integer and mixed-integer programming method, and mixed-integer programming [7]. The second category consists of stochastic search methods such as genetic algorithms [8] and [9], evolutionary programming [10], simulated annealing [11] and [12] and particle swarm optimization [13]. Although simple and fast, the priority list approach usually incurs high production costs. The dynamic programming is flexible yet incurs the problem of high dimensionality. The branch-and-bound method uses a linear function to represent the fuel consumption and time-dependent start-up costs, as well as obtains the required lower and upper bounds. However, its computational time increases exponentially with the increment of the dimensions of the UC problem. Despite using linear programming to obtain and verify an integer solution, the mixed integer programming method is limited by an excessive computational time. While offering a fast solution, the Lagrangian relaxation method may incur numerical convergence problems. Despite its development, an artificial intelligence method based on heuristic depth-first search method [14] may be limited in its application to large-scale UC problems. Additionally, related works have attempted to reduce the search space in large-scale problems by using hybrid methods such as the Lagrangian relaxation and genetic algorithm (LRGA) [15] as well as the priority list-based evolutionary algorithm (PLEA) [16]. These methods are more efficient than single ones due to lower production costs and a faster computational time. The ant system has been applied recently to combinatorial optimization problems such as the UC problem. Owing to their feasibility for combinatorial optimization problems and their potential in locating a nearly global optimization solution, ant algorithm are appropriate for the UC problem. Huang [17] solved a hydroelectric generation scheduling problem using ant colony system-based optimization approaches. Simon and Yu [18] and [19] introduced the ant colony search algorithm for solving UC problems. Shi [20] developed an approach by combining an ant colony optimization method and random search schemes for the UC problem. Christopher [21] proposed a nodal ant colony optimization scheme to solve a profit based UC problem in a deregulated power system environment. Vaisakh [22] developed an evolving ant colony optimization method for solving UC problem. In this method, an optimal set of ant colony optimization (ACO) parameters is found, while ACO solves the UC problem. Owing to the nature of the ACS algorithm, the application of ACS on the UC problem of a large-scale power system would require an appropriately simplified procedure. Jang [23] proposed a useful and efficient method to enhance the ACS performance on the UC problem. Despite the satisfactory performance of conventional ant systems for small problems with a moderate dimension and searching space, ant systems require an excessive computational time for large-scale unit commitment. In addition, these systems may be limited in convergence, and local optimal solutions may be generated. To overcome these limitations, this work presents a novel method, HT-ACS, for solving the UC problem for a 24 h period. HT-ACS combines ACS [17], [18], [19] and [20] with the Taguchi method [24]. HTACS is inserted into the ACS procedure before its global pheromone update. The systematic reasoning ability of TM is used to select an improved UC solution quickly for representing the potential UC schedule. Therefore, the TM experimental design method can enhance ACS, explaining why HTACS is more robust, statistically sound, and quickly convergent. Moreover, effectiveness of the proposed method is demonstrated by testing it on an actual system. Comparing our results with those from previous methods using the traditional ACS algorithm reveals that the proposed algorithm provides a more accurate solution within a shorter execution time. Several up-to-date reviews of the literature on UC problems are listed in [25], [26], [27], [28], [29] and [30]. Furthermore, recent research on the UC problem concerning the IEEE 118-bus system is presented in [31], [32] and [33]. Indeed, owing to the nature of the ACS algorithm, the application of ACS or HTACS on the UC problem of a large-scale power system would require an appropriate simplified procedure. The method proposed by Se-Hwan Jang et al. is one of the useful and efficient methods. In our study, the simplified procedure for the UC problem includes:

This work presents a novel hybrid Taguchi-ant colony system (HTACS) algorithm for the short-term UC problem. The ACS algorithm is feasible for combinatorial optimization problems, such as unit commitment scheduling. However, ACS incurs premature convergence problem and occasionally takes a longer time than other evolutionary algorithms. Importantly, the proposed algorithm introduces the combination of the ACS algorithm with the Taguchi operation to increase the efficiency of the typical ACS algorithm. Namely, the HTACS algorithm is an improved version of the standard ACS algorithm to solve the UC problem. The proposed algorithm uniquely has a powerful global exploration capability. Simulation results demonstrate that the HTACS algorithm is a highly competent means of solving the UC problem. Although the UCP was first solved in the 1960s, the formulation of the problem today for large-scale power systems remains unchanged, especially for Taiwan power system. Therefore, this study focuses on the traditional UC problem formulation but develops a novel algorithm to solve it, which brought significant improvement in terms of the computational efficiency. Definitely, the operation of modern power systems certainly differs from that of older systems, such as by the integration of large-scale renewable energy, the parallel operation of large systems with many micro grids, and deregulated power markets. Therefore, the traditional problem formulation should be modified to suit the conditions today. Incorporating the changes in our research is undergoing.