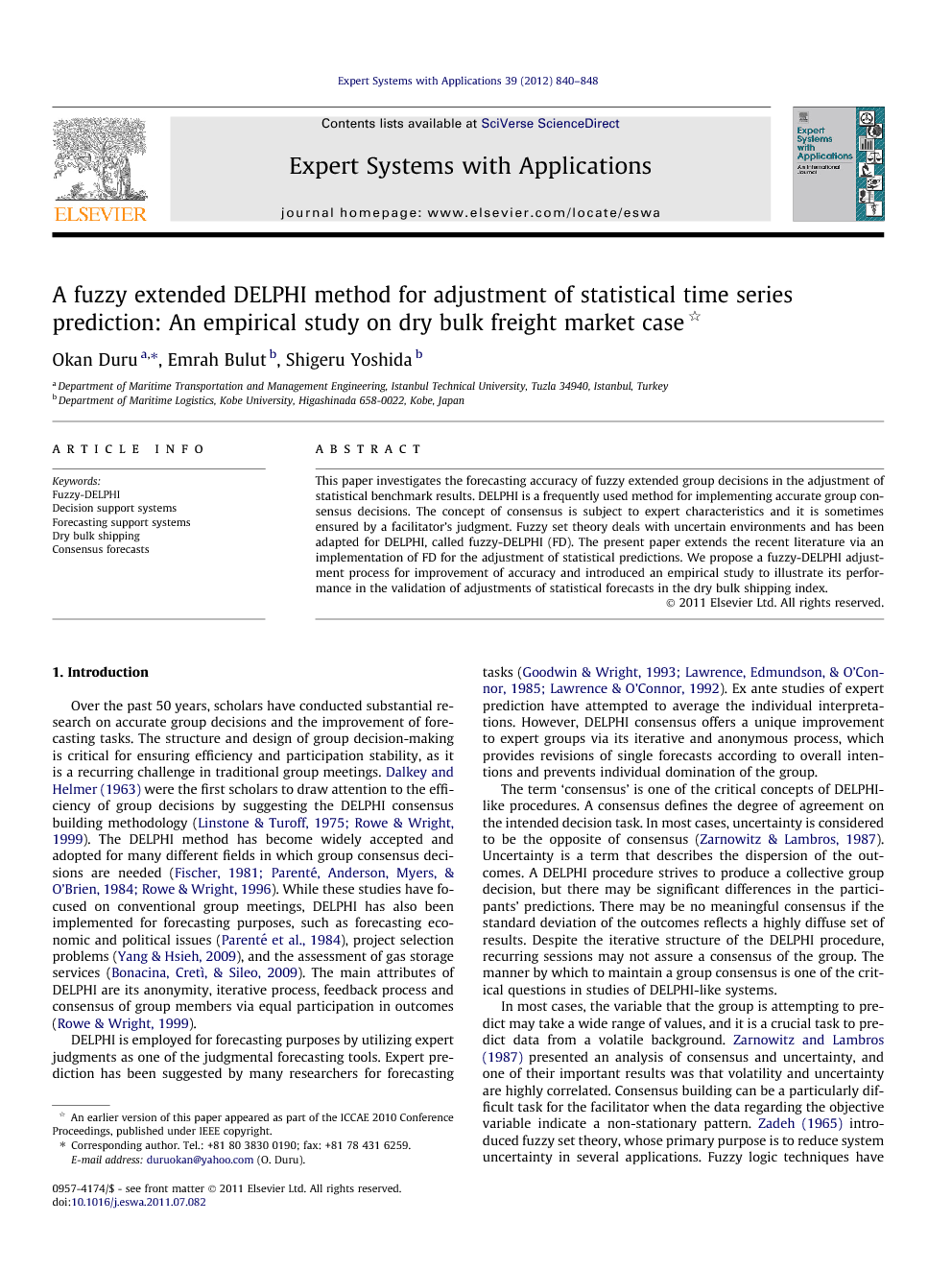 This paper investigates the forecasting accuracy of fuzzy extended group decisions in the adjustment of statistical benchmark results. DELPHI is a frequently used method for implementing accurate group consensus decisions. The concept of consensus is subject to expert characteristics and it is sometimes ensured by a facilitator’s judgment. Fuzzy set theory deals with uncertain environments and has been adapted for DELPHI, called fuzzy-DELPHI (FD). The present paper extends the recent literature via an implementation of FD for the adjustment of statistical predictions. We propose a fuzzy-DELPHI adjustment process for improvement of accuracy and introduced an empirical study to illustrate its performance in the validation of adjustments of statistical forecasts in the dry bulk shipping index.

Over the past 50 years, scholars have conducted substantial research on accurate group decisions and the improvement of forecasting tasks. The structure and design of group decision-making is critical for ensuring efficiency and participation stability, as it is a recurring challenge in traditional group meetings. Dalkey and Helmer (1963) were the first scholars to draw attention to the efficiency of group decisions by suggesting the DELPHI consensus building methodology (Linstone and Turoff, 1975 and Rowe and Wright, 1999). The DELPHI method has become widely accepted and adopted for many different fields in which group consensus decisions are needed (Fischer, 1981, Parente´ et al., 1984 and Rowe and Wright, 1996). While these studies have focused on conventional group meetings, DELPHI has also been implemented for forecasting purposes, such as forecasting economic and political issues (Parente´ et al., 1984), project selection problems (Yang & Hsieh, 2009), and the assessment of gas storage services (Bonacina, Cretì, & Sileo, 2009). The main attributes of DELPHI are its anonymity, iterative process, feedback process and consensus of group members via equal participation in outcomes (Rowe & Wright, 1999). DELPHI is employed for forecasting purposes by utilizing expert judgments as one of the judgmental forecasting tools. Expert prediction has been suggested by many researchers for forecasting tasks (Goodwin and Wright, 1993, Lawrence et al., 1985 and Lawrence and O’Connor, 1992). Ex ante studies of expert prediction have attempted to average the individual interpretations. However, DELPHI consensus offers a unique improvement to expert groups via its iterative and anonymous process, which provides revisions of single forecasts according to overall intentions and prevents individual domination of the group. The term ‘consensus’ is one of the critical concepts of DELPHI-like procedures. A consensus defines the degree of agreement on the intended decision task. In most cases, uncertainty is considered to be the opposite of consensus (Zarnowitz & Lambros, 1987). Uncertainty is a term that describes the dispersion of the outcomes. A DELPHI procedure strives to produce a collective group decision, but there may be significant differences in the participants’ predictions. There may be no meaningful consensus if the standard deviation of the outcomes reflects a highly diffuse set of results. Despite the iterative structure of the DELPHI procedure, recurring sessions may not assure a consensus of the group. The manner by which to maintain a group consensus is one of the critical questions in studies of DELPHI-like systems. In most cases, the variable that the group is attempting to predict may take a wide range of values, and it is a crucial task to predict data from a volatile background. Zarnowitz and Lambros (1987) presented an analysis of consensus and uncertainty, and one of their important results was that volatility and uncertainty are highly correlated. Consensus building can be a particularly difficult task for the facilitator when the data regarding the objective variable indicate a non-stationary pattern. Zadeh (1965) introduced fuzzy set theory, whose primary purpose is to reduce system uncertainty in several applications. Fuzzy logic techniques have provided considerable improvements in the fields of automation and computer intelligence, which use many uncertain variables. Fuzzy set theory is an alternative for increasing predictive performance. It ensures consensus incentives and compiles expert expectations. The implementation of fuzzy DELPHI methods (FDM) has been investigated by many researchers. Kaufmann and Gupta (1988) introduced an FDM procedure designed to define optimistic, moderate and pessimistic valuations of experts via triangular fuzzy numbers (TFN). In their technology forecasting study, Ishikawa et al. (1993) collected responses on a scale of expert judgments. TFNs use the selected scales as their grades of membership. The final crisp result is calculated by max–min FDM and fuzzy integration. An important conclusion of this study is that the FDM ensured consensus in only one round. Chang, Huang, and Lin (2000) proposed a new FDM approach to assess managerial talent. This study used fuzzy statistics and ensured continuous, mathematically explicit membership functions. Chang et al. (2000) reviewed the previous FDM works and concluded that the FDM provides an opportunity to treat fuzziness arising from the forecasting objective and experts themselves. Fuzzy numbers provide a way to process groups of variables rather than the crisp estimates of the conventional DELPHI method. The original contribution of the present paper is that it improves the FDM for financial time series forecasting and implements an algorithm for defining the final crisp adjustments of statistical benchmark methods. Fuzzy numbers are applied to incorporate the scale of adjustments. An expert group is required to adjust the statistical average forecast provided by linguistic terms that are linked to percentage changes. These adjustments are transferred to intended fuzzy sets. The crisp result is calculated as the centroid of the final average fuzzy set. This paper is organized as follows: Section 2 reviews the data on the shipping freight market and detects the unit roots of seasonality in the BDI data. Section 3 presents the forecasting models and procedures. Section 4 examines the empirical results and compares the performance of several results. Section 5 concludes the present paper and provides recommendations for future studies.

Shipping, as a leading indicator of economic activity, has an important role in the world trade system, and it can be considered as an indicator of upturns or slowdowns in the economy. Maritime transportation statistics provide a record of world trade traffic (over 80% of world trade uses the seaways), and the first indications of economic activity can thus be deduced from shipping indicators. One of the unique determinants of maritime transportation is the price of shipping service, called the freight rate. A proper forecast of freight rates has many fields of application including various industrial, financial and governmental decisions. Due to their particular inferences, forecasting tasks are necessary even though their predictions are inferior. The current paper attempts to combine some theoretical implications of conventional DELPHI procedures and fuzzy sets into an applicable hybrid model for shipping businesses and other stakeholders of local and global economic institutions. The adjustment of statistical results is a common process in several businesses, and it is important to define a structure for efficient and proper adjustments. The fuzzy-DELPHI based adjustment procedure is investigated in a dry bulk shipping example, and the results are promising. One critical conclusion is that the consensus of the group was ensured successfully since a reduction on variance is gained. Moreover, the fuzzy-DELPHI based study provided superior predictions, as compared with the statistical benchmark results. In fact, statistical approach could not success over no-change strategy, but proposed method improved its accuracy by expert aided design. Further research may contribute to develop a method for optimization of size of fuzzy sets or selection of the shape of fuzzy sets. The present paper applied triangular sets as in conventional use, but several alternatives exist. Another contribution can be performed to bootstrap expert judgments due to long term structural deviations. Structural bias may exist on specific expert valuations.