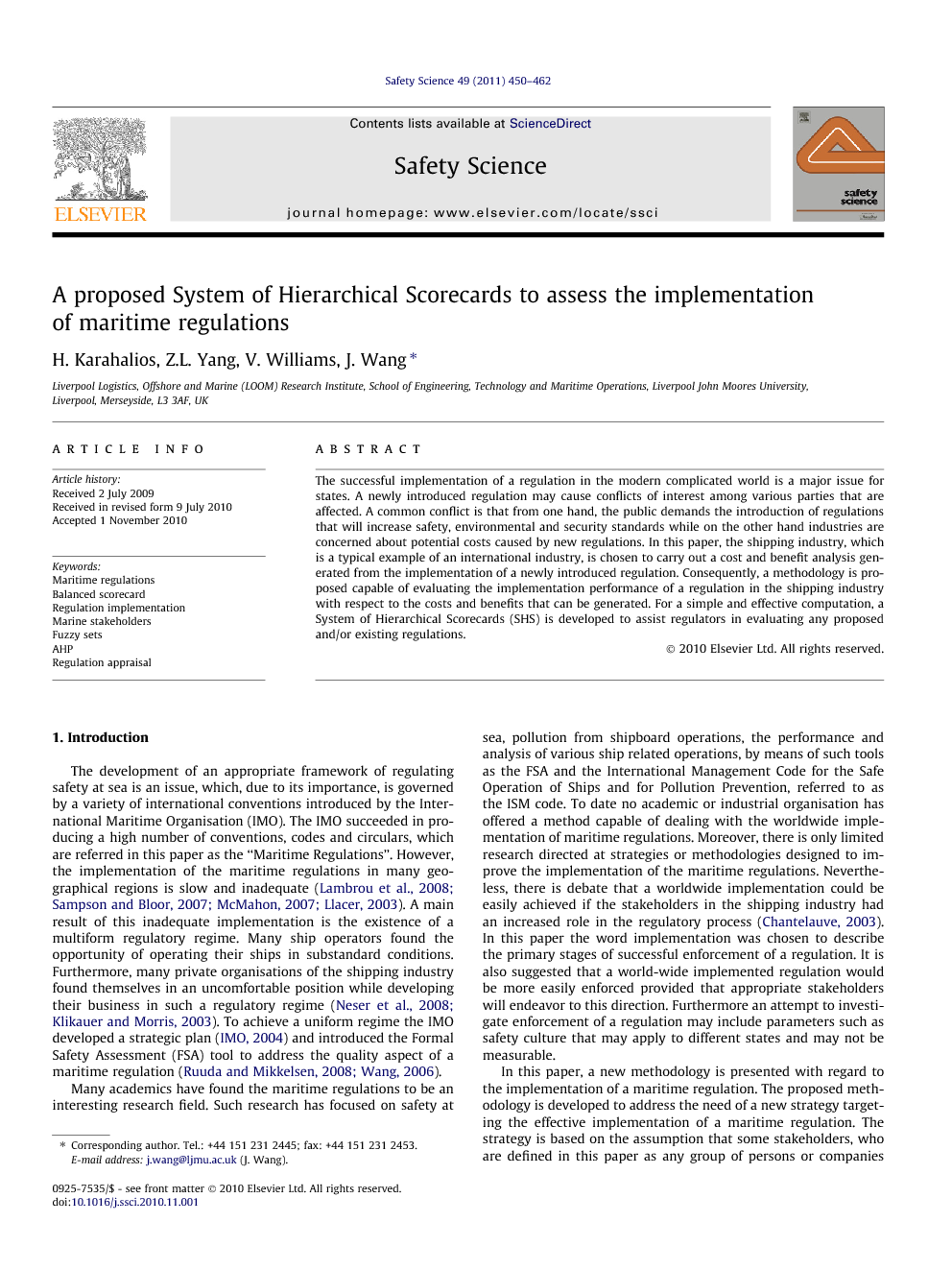 The successful implementation of a regulation in the modern complicated world is a major issue for states. A newly introduced regulation may cause conflicts of interest among various parties that are affected. A common conflict is that from one hand, the public demands the introduction of regulations that will increase safety, environmental and security standards while on the other hand industries are concerned about potential costs caused by new regulations. In this paper, the shipping industry, which is a typical example of an international industry, is chosen to carry out a cost and benefit analysis generated from the implementation of a newly introduced regulation. Consequently, a methodology is proposed capable of evaluating the implementation performance of a regulation in the shipping industry with respect to the costs and benefits that can be generated. For a simple and effective computation, a System of Hierarchical Scorecards (SHS) is developed to assist regulators in evaluating any proposed and/or existing regulations.

The development of an appropriate framework of regulating safety at sea is an issue, which, due to its importance, is governed by a variety of international conventions introduced by the International Maritime Organisation (IMO). The IMO succeeded in producing a high number of conventions, codes and circulars, which are referred in this paper as the “Maritime Regulations”. However, the implementation of the maritime regulations in many geographical regions is slow and inadequate (Lambrou et al., 2008, Sampson and Bloor, 2007, McMahon, 2007 and Llacer, 2003). A main result of this inadequate implementation is the existence of a multiform regulatory regime. Many ship operators found the opportunity of operating their ships in substandard conditions. Furthermore, many private organisations of the shipping industry found themselves in an uncomfortable position while developing their business in such a regulatory regime (Neser et al., 2008 and Klikauer and Morris, 2003). To achieve a uniform regime the IMO developed a strategic plan (IMO, 2004) and introduced the Formal Safety Assessment (FSA) tool to address the quality aspect of a maritime regulation (Ruuda and Mikkelsen, 2008 and Wang, 2006). Many academics have found the maritime regulations to be an interesting research field. Such research has focused on safety at sea, pollution from shipboard operations, the performance and analysis of various ship related operations, by means of such tools as the FSA and the International Management Code for the Safe Operation of Ships and for Pollution Prevention, referred to as the ISM code. To date no academic or industrial organisation has offered a method capable of dealing with the worldwide implementation of maritime regulations. Moreover, there is only limited research directed at strategies or methodologies designed to improve the implementation of the maritime regulations. Nevertheless, there is debate that a worldwide implementation could be easily achieved if the stakeholders in the shipping industry had an increased role in the regulatory process (Chantelauve, 2003). In this paper the word implementation was chosen to describe the primary stages of successful enforcement of a regulation. It is also suggested that a world-wide implemented regulation would be more easily enforced provided that appropriate stakeholders will endeavor to this direction. Furthermore an attempt to investigate enforcement of a regulation may include parameters such as safety culture that may apply to different states and may not be measurable. In this paper, a new methodology is presented with regard to the implementation of a maritime regulation. The proposed methodology is developed to address the need of a new strategy targeting the effective implementation of a maritime regulation. The strategy is based on the assumption that some stakeholders, who are defined in this paper as any group of persons or companies with interest in the shipping industry, could fail to implement a regulation due to lack of resources. Such resources may include lack of knowledge, inadequate access to technologies, and lack of human recourses. Furthermore a stakeholder may choose to disregard a regulation because he cannot identify and/or evaluate the long term benefits that he may achieve by implementing that particular regulation. The new strategy will be based on the evaluation of an existing and/or a newly introduced maritime regulation implementation performance through a cost benefit analysis for all the relevant stakeholders. By adopting this approach it will be possible to evaluate the potential cost that a stakeholder may suffer due to the implementation of a regulation. Additionally the competitive advantages that a stakeholder may gain can also be identified and evaluated. The advantage of this approach is that the evaluation of costs and benefits of a regulation can be achieved and consequently make easier a direct comparison among them. Such an approach can be adopted by introducing a methodology the applicability of which is demonstrated by the means of a numerical example.