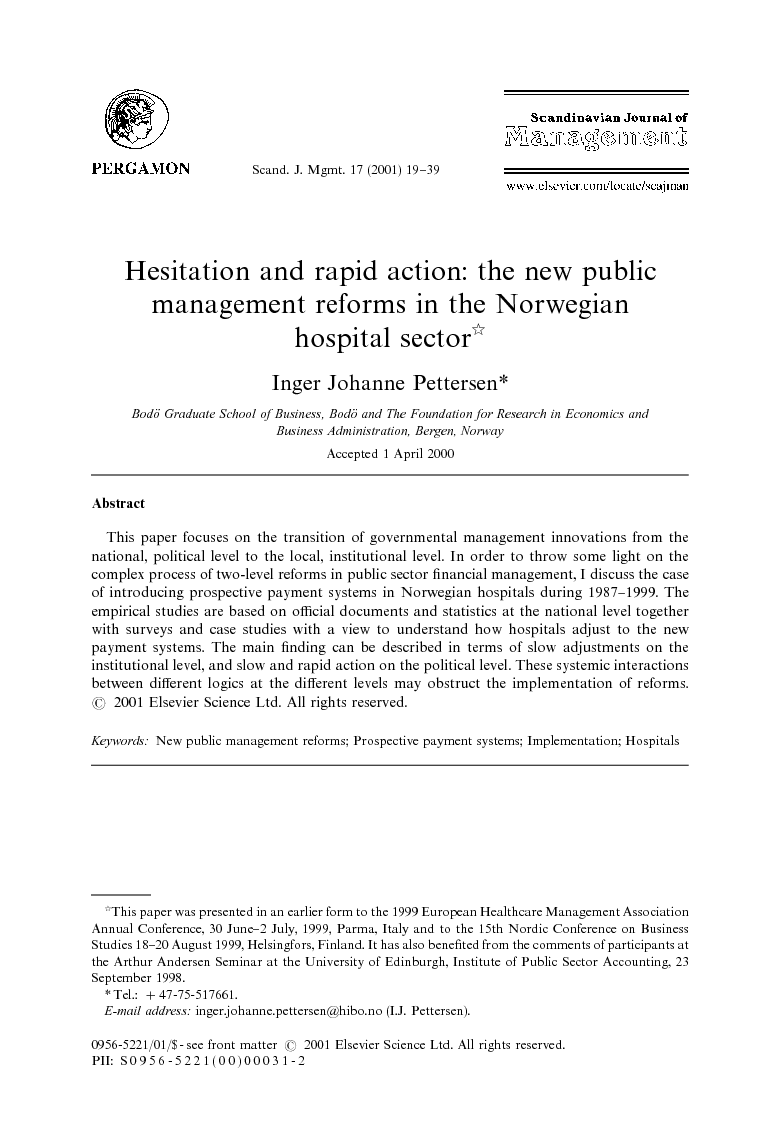 This paper focuses on the transition of governmental management innovations from the national, political level to the local, institutional level. In order to throw some light on the complex process of two-level reforms in public sector financial management, I discuss the case of introducing prospective payment systems in Norwegian hospitals during 1987–1999. The empirical studies are based on official documents and statistics at the national level together with surveys and case studies with a view to understand how hospitals adjust to the new payment systems. The main finding can be described in terms of slow adjustments on the institutional level, and slow and rapid action on the political level. These systemic interactions between different logics at the different levels may obstruct the implementation of reforms.

The last 10 years have witnessed an international trend to impose new and more market-orientated management systems in the public sector. The aim of this paper is to deal with the transition of a governmental management innovation from the national, political level to implementation at the local, institutional level. The hospital sector is one of the main areas where such reforms have been introduced as part of a search for greater efficiency in service production. The case of introducing prospective payment systems (PPS) in Norwegian hospitals in the period 1987–1999 is discussed, and the main focus is on the two levels of implementation, since reforms of this kind are created in interaction between the government and the institutional levels. PPS as a management technique is associated with the term new public financial management (NPFM), a global reform movement that introduces accounting-based techniques such as cost-improvement programmes, performance indicators, financial management information systems, financial targets, delegated budgets, resource allocation rules and different methods for per-case payment into the public sector (Hood, 1995). The NPFM reforms have been criticised for adopting too narrow and deterministic an implementation perspective (Lapsley, 1996). It has been argued that this may be one reason why the evidence in favour of accountable management ideas and new public management reforms is not very convincing (Hopwood, 1984; Olson, Guthrie, & Huphrey, 1998). This literature questions the neo-classical belief in the mechanistic techniques of management that are supposed to make public organisations more efficient. Because of the interplay between politics and administration, reform processes such as those associated with NPFM are not characterised by simple adjustments to current international administrative doctrines. The reform concepts are filtered, interpreted and modified on their journey from political decisions to administrative implementation. This complex process can be illuminated by the changes in the payment system of the Norwegian hospitals that have been planned over the last 10–12 years. To understand such change processes, which are generated on a political level and implemented locally, it is necessary to study both the central, governmental activities and the local initiatives. Consequently, the theoretical platform of this study is an assumption that accounting practices should not be studied as an organisational practice isolated from the wider social and institutional context in which it exists (Hopwood & Miller, 1994; Roberts & Scapens, 1985). In analysing the empirical data a framework is therefore used which identifies a set of contextual and behavioural variables to help us to understand the reform processes. The transformation process between countries (Czarniawska & Sevon, 1996) will not be discussed here. Consequently, this paper does not address the question of the cultural or norm dimensions within a country, or its specific historical frameworks. The paper is organised as follows. First the broad theoretical framework is presented. The empirical data is then discussed, as applying to the national and the hospital levels of reform efforts. The last part of the paper offers a brief analysis of the empirical findings.