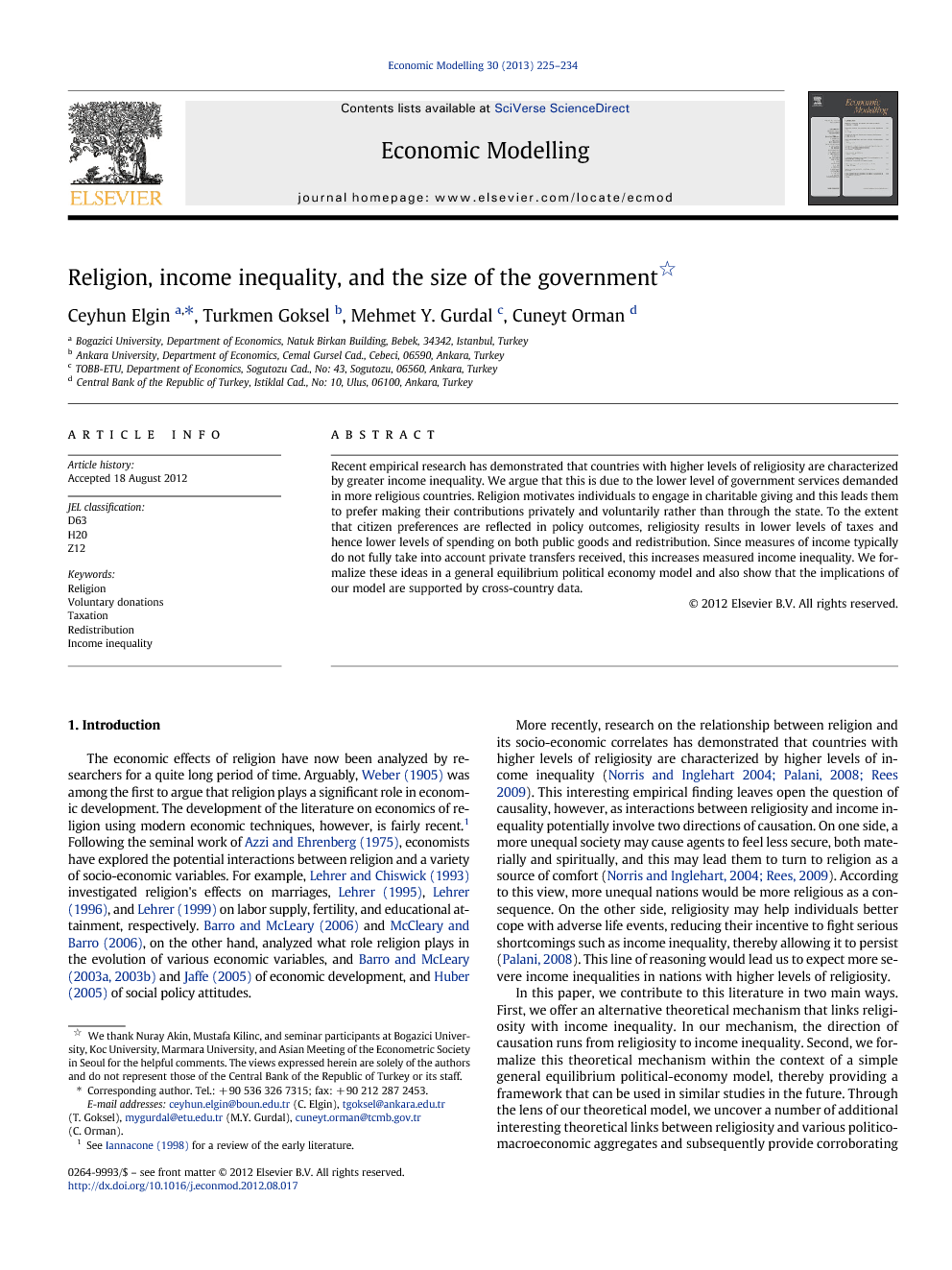 Recent empirical research has demonstrated that countries with higher levels of religiosity are characterized by greater income inequality. We argue that this is due to the lower level of government services demanded in more religious countries. Religion motivates individuals to engage in charitable giving and this leads them to prefer making their contributions privately and voluntarily rather than through the state. To the extent that citizen preferences are reflected in policy outcomes, religiosity results in lower levels of taxes and hence lower levels of spending on both public goods and redistribution. Since measures of income typically do not fully take into account private transfers received, this increases measured income inequality. We formalize these ideas in a general equilibrium political economy model and also show that the implications of our model are supported by cross-country data.

The aim of this study was to investigate the role religion plays in determining income inequality within a nation. To this end, we first developed a simple political-economy model in which the more religious the individuals are, the higher is the satisfaction they get from making voluntary donations. In order to be able to spend a higher portion of their incomes on voluntary donations, the religious vote for lower levels of taxes as compared to secular individuals. The political process thus results in a smaller government size in countries with higher levels of religiosity, implying lower levels of spending on public goods and redistribution. Since tax-based redistribution is a major force shaping the distribution of income, our model implies greater income inequality in more religious countries. Our model, therefore, offers a novel mechanism that links religiosity with income inequality that is not based on explanations that emphasize the role of religion in providing personal security and a coping mechanism with socio-economic hardships. We next showed that the predictions of our theoretical model hold up in cross-national data. In particular, we provided evidence that the positive correlation between religiosity and income inequality runs through the mechanism suggested by our theoretical model. Our empirical results confirm the findings of Norris and Inglehart (2004), Palani (2008), and Rees (2009), who find a positive correlation between religiosity and income inequality, and the findings of Gill and Lundsgaarde (2004), Scheve and Stasavage (2006), and others, who find a negative correlation between religiosity and state welfare spending. However, we went beyond these studies and showed that religiosity is also negatively correlated with both total government spending (the size of the government) and government spending excluding welfare payments. This finding suggests that the religious might have an inherent preference for a smaller state, and that a smaller welfare spending observed in more religious countries documented by previous studies might just be a manifestation of this more general outlook. We also provided theoretical evidence about the possibility that the measured level of income inequality might not always accurately reflect the actual level of income inequality in a country, thanks to the substantial underreporting of private transfers in income statements, including those that are religiously-motivated. This leads us to conclude that it is prudent to exercise some level of cautiousness in interpreting various observed relations between religiosity and other socioeconomic variables, particularly when private transfers are an important part of the equation. We believe that future research could extend our findings in different directions. First, the study of the relationship between religion and voluntary donations or religion and income inequality in a microeconomic dataset would further test our claim that religious individuals prefer voluntary donations over taxes. Second, it would be worthwhile to investigate in detail the relationship between consumption inequality and religiosity in order to get a better understanding of the extent religion affects societal well-being.