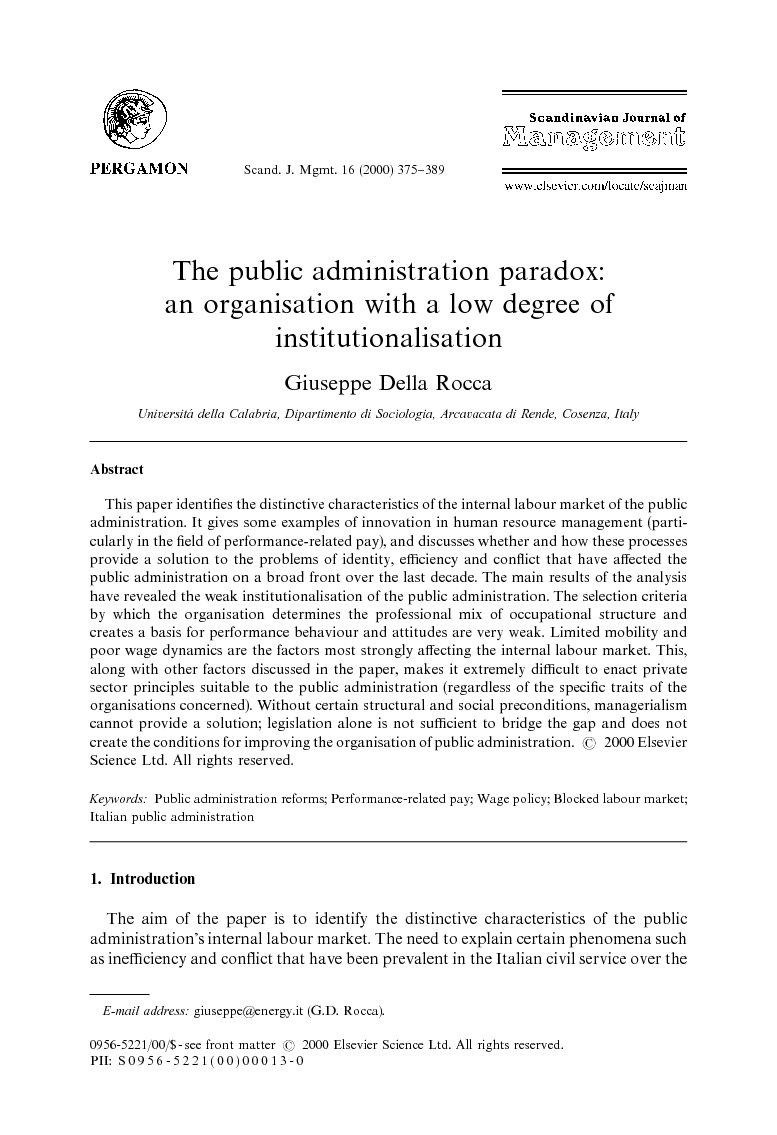 This paper identifies the distinctive characteristics of the internal labour market of the public administration. It gives some examples of innovation in human resource management (particularly in the field of performance-related pay), and discusses whether and how these processes provide a solution to the problems of identity, efficiency and conflict that have affected the public administration on a broad front over the last decade. The main results of the analysis have revealed the weak institutionalisation of the public administration. The selection criteria by which the organisation determines the professional mix of occupational structure and creates a basis for performance behaviour and attitudes are very weak. Limited mobility and poor wage dynamics are the factors most strongly affecting the internal labour market. This, along with other factors discussed in the paper, makes it extremely difficult to enact private sector principles suitable to the public administration (regardless of the specific traits of the organisations concerned). Without certain structural and social preconditions, managerialism cannot provide a solution; legislation alone is not sufficient to bridge the gap and does not create the conditions for improving the organisation of public administration.

The aim of the paper is to identify the distinctive characteristics of the public administration's internal labour market. The need to explain certain phenomena such as inefficiency and conflict that have been prevalent in the Italian civil service over the last decade, first attracted attention to this topic. All these phenomena indicated a crisis in the regulatory context and a discontinuity in relationships between individuals and the organisation. The questions raised here, implicitly or explicitly, concern the nature of regulatory mechanisms, the definition of such factors as have characterised the crisis, and the relationship between the forms of regulation in the public and private sectors. The leading concept of the paper is the public administration paradox. This paradox is explained on the one hand by the nature of the public administration as an institution representing collective interests, and on the other by its low degree of institutionalisation owing to structural weakness and the inability to effect internal integration between functions, roles and occupational groups. The public administration is regarded as a highly institutionalised organisation, because it works for the general interest of the national community. Its mission, its leading principles for action, its decision-making procedure, and the main tasks and objectives of its employees are all established by law and democratic practice. The role of bureaucracy is not only based on technical knowledge; it is also centred on social responsibility. However, a high degree of institutionalisation is also achieved when an organisation is autonomous vis-à-vis its environment. That is, when it is self-sufficient in the allocation and management of human and financial resources, and when such a prerogative leads to good administration in relation to both the external and the internal environment. Such control capability is usually achieved through the clear definition of organisational boundaries and a high degree of internal integration. From this organisational point of view, we may say that institutionalisation of the public administration is actually very low. Many studies describe it as a fragmented organisation, with little integration between functions and roles, little focus on working processes and final results, and little internal labour market integration. In this ambivalence lies the paradox of public administration: on the one hand, an institution representing the collective interest and, on the other, one that is characterised by a diffusion of organisational practices in which selective interests prevail. The current dilemma concerns how to govern these selective interests: what sort of organisations are needed, and what rules for the management of the internal labour market. Several countries have opted to adopt organisational principles and management techniques already employed in the private sector, instead of following a model of public regulation. The paper will address the question of choosing such managerial innovations in the Italian public sector. It will show: how the introduction of management techniques, imported from the private sector, are not providing a new social and economic regulatory practice; how, up to now, no better or more stable solution to problems like social consensus or organisational efficiency have been found; and how the paradox is not being solved by the implementation of a new practice. Attention will focus on the introduction of performance-related pay for operatives and managers. This specific aspect of employment relations is usually emphasised as a turning point in organisational change. The successful introduction of such a system — owing to flexible wage schemes — is seen as a signal, on the one hand, of a more dynamic internal labour market and, on the other, of the introduction of new managerial practices based on the definition of objectives and the control of results. In the last part of the paper an attempt will be made to describe the differences between the public organisation with its internal labour market, and the private organisation. The purpose of such a comparison is: to identify the main factors that limit innovations in new payment systems; why the new managerial practices in this case did not always pay attention to the nature of public management; and why the specific environment of the public sector organisation was not taken into account.

The analysis of new managerial practices in Italy (such as pay-through-incentives) has made it possible to draw a number of conclusions. The decentralisation and rationalisation of public organisations with the help of private and professional management instruments alone, are difficult to realise. First, the introduction of methodological approaches, such as productivity measurement or management-by-objectives, clashes with a situation in which management control systems are weak and still largely dependent on the world outside. Second, the presence of different occupational groups is the main factor defining the culture and dynamics of the public administration labour market. Of particular importance is the presence of large professional groups such as teachers, doctors and nurses with their own autonomy and their own rules based on the certification of knowledge and performance. The terms “control” and “performance” have different meanings for all these groups; assessment procedures and performance standards implemented by the administration alone are of questionable value. The analysis confirms the paradox of an expected high degree of institutionalisation on the one hand (since the civil service represents the collective interest), and a low degree of organisational integration — with fragmentation and a tendency towards selective interests — on the other. New personnel management practices have not overcome this kind of fragmentation of interests. The problem of how to reconcile selective with collective interests remains unsolved. The failure of the new personnel management rules risks reinforcing the differences on both sides of the paradox. New management is breaking down the traditional internal labour market regulation, raising expectations but not finding stable solutions. Such experiences can be looked at from different viewpoints, and different alternatives might be found in the future by acting on the assumption that private sector management principles are applicable to public organisation. In the present case, however, in the absence of any adequate configuration of other “new public management” factors, professional management and efficiency policies cannot succeed as the only guiding principles. Private personnel management instruments can solve many aspects of the paradox by way of more effective recruitment, selection and promotion; internal fragmentation could be subject to more control so as to avoid a loss of identity and to procure stronger integration and continuity between different occupations and levels. But the promotion of organisational dynamics and the activation of the labour market cannot be limited to the redefinition of management roles or to local and national collective bargaining practices. Professional and personnel management practices cannot offer a solution without the appropriate structural and social preconditions. More radical approaches must be implemented — such as changes in organisational structures with the scaling down of monolithic public service organisations into separate units, and with the introduction of competition and market mechanisms between them. In a market-orientated environment, new management instruments can work better than in an administrative one. Another alternative might be to reinvent a new collective identity for public services in a modern society. Owing to the fragmentation of interests, much of the crisis can be explained by the decline of welfare state values, with the extension of non-selective employment criteria as regards service effectiveness vis-à-vis the end user (Ferraresi, 1980). Such a process might establish a new loyalty among members of the civil service. Above all, better integration and a new identity could be reached from a strategic and cultural point of view. In this case, managerial practice would be seen not as an alternative but as a complement to the strategic issue of reinventing a new collective civil service identity and a more efficient organisation.