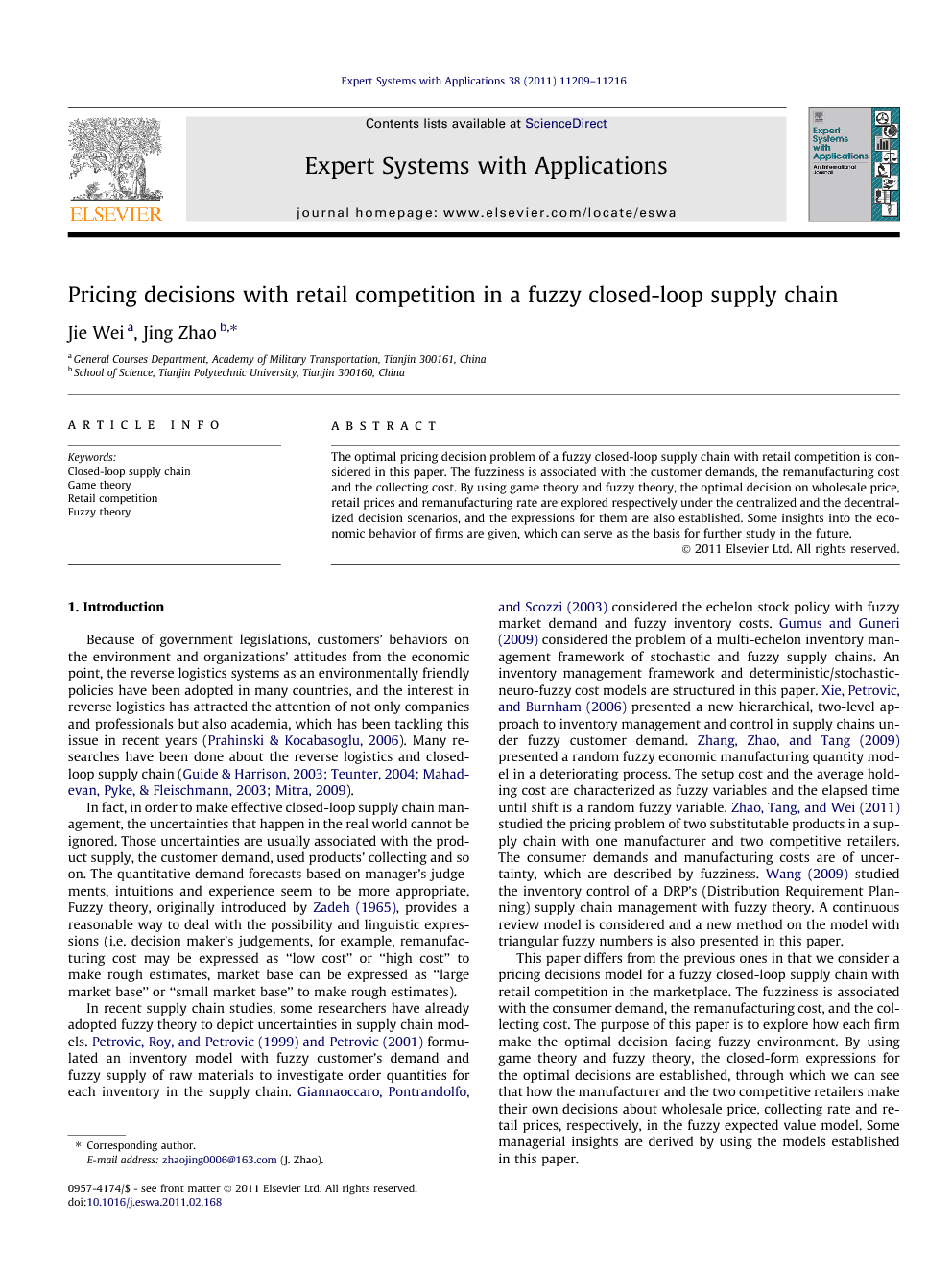 The optimal pricing decision problem of a fuzzy closed-loop supply chain with retail competition is considered in this paper. The fuzziness is associated with the customer demands, the remanufacturing cost and the collecting cost. By using game theory and fuzzy theory, the optimal decision on wholesale price, retail prices and remanufacturing rate are explored respectively under the centralized and the decentralized decision scenarios, and the expressions for them are also established. Some insights into the economic behavior of firms are given, which can serve as the basis for further study in the future.

Because of government legislations, customers’ behaviors on the environment and organizations’ attitudes from the economic point, the reverse logistics systems as an environmentally friendly policies have been adopted in many countries, and the interest in reverse logistics has attracted the attention of not only companies and professionals but also academia, which has been tackling this issue in recent years (Prahinski & Kocabasoglu, 2006). Many researches have been done about the reverse logistics and closed-loop supply chain (Guide and Harrison, 2003, Teunter, 2004, Mahadevan et al., 2003 and Mitra, 2009). In fact, in order to make effective closed-loop supply chain management, the uncertainties that happen in the real world cannot be ignored. Those uncertainties are usually associated with the product supply, the customer demand, used products’ collecting and so on. The quantitative demand forecasts based on manager’s judgements, intuitions and experience seem to be more appropriate. Fuzzy theory, originally introduced by Zadeh (1965), provides a reasonable way to deal with the possibility and linguistic expressions (i.e. decision maker’s judgements, for example, remanufacturing cost may be expressed as “low cost” or “high cost” to make rough estimates, market base can be expressed as “large market base” or “small market base” to make rough estimates). In recent supply chain studies, some researchers have already adopted fuzzy theory to depict uncertainties in supply chain models. Petrovic et al., 1999 and Petrovic, 2001 formulated an inventory model with fuzzy customer’s demand and fuzzy supply of raw materials to investigate order quantities for each inventory in the supply chain. Giannaoccaro, Pontrandolfo, and Scozzi (2003) considered the echelon stock policy with fuzzy market demand and fuzzy inventory costs. Gumus and Guneri (2009) considered the problem of a multi-echelon inventory management framework of stochastic and fuzzy supply chains. An inventory management framework and deterministic/stochastic-neuro-fuzzy cost models are structured in this paper. Xie, Petrovic, and Burnham (2006) presented a new hierarchical, two-level approach to inventory management and control in supply chains under fuzzy customer demand. Zhang, Zhao, and Tang (2009) presented a random fuzzy economic manufacturing quantity model in a deteriorating process. The setup cost and the average holding cost are characterized as fuzzy variables and the elapsed time until shift is a random fuzzy variable. Zhao, Tang, and Wei (2011) studied the pricing problem of two substitutable products in a supply chain with one manufacturer and two competitive retailers. The consumer demands and manufacturing costs are of uncertainty, which are described by fuzziness. Wang (2009) studied the inventory control of a DRP’s (Distribution Requirement Planning) supply chain management with fuzzy theory. A continuous review model is considered and a new method on the model with triangular fuzzy numbers is also presented in this paper. This paper differs from the previous ones in that we consider a pricing decisions model for a fuzzy closed-loop supply chain with retail competition in the marketplace. The fuzziness is associated with the consumer demand, the remanufacturing cost, and the collecting cost. The purpose of this paper is to explore how each firm make the optimal decision facing fuzzy environment. By using game theory and fuzzy theory, the closed-form expressions for the optimal decisions are established, through which we can see that how the manufacturer and the two competitive retailers make their own decisions about wholesale price, collecting rate and retail prices, respectively, in the fuzzy expected value model. Some managerial insights are derived by using the models established in this paper. The rest of the paper is organized as follows. Section 2 gives the preliminaries for this paper. Section 3 gives the model description and notations, and Section 4 details our key analytical results. Fuzzy simulation and numerical studies are given in Section 5. Concluding remarks are presented in Section 6.

In this paper, we explore the roles of the two competitive retailers and the manufacturer by examining the closed-loop supply chain in a fuzzy environment over two different decision scenarios. By using the fuzzy theory and game theory, some insights into the economic behavior of firms are found, which could serve as the basis for further study in the future. The expressions for optimal retail prices, wholesale price, collecting rate are derived with fuzzy expected value model. We then analyze the results by numerical example and give some managerial analysis. Several extensions to this study are possible. First, we assume that the manufactured product and the remanufactured product have the same quality in this study. By allowing for the difference of quality existing between the manufacturing product and the remanufacturing product, which would cause the differentiated retail pricing decisions, the demands substituting and the demands competing, the study on which could lead to valuable managerial insights. This would be a straight forward extension of our model and the methodology developed in this paper can be used to study that extension. Second, the models are considered with single period in this paper. We could further study the case with multiple periods. Finally, we could also study the case with competition between manufacturing and remanufacturing processes, namely, the manufacturing and remanufacturing are taken by different firms.