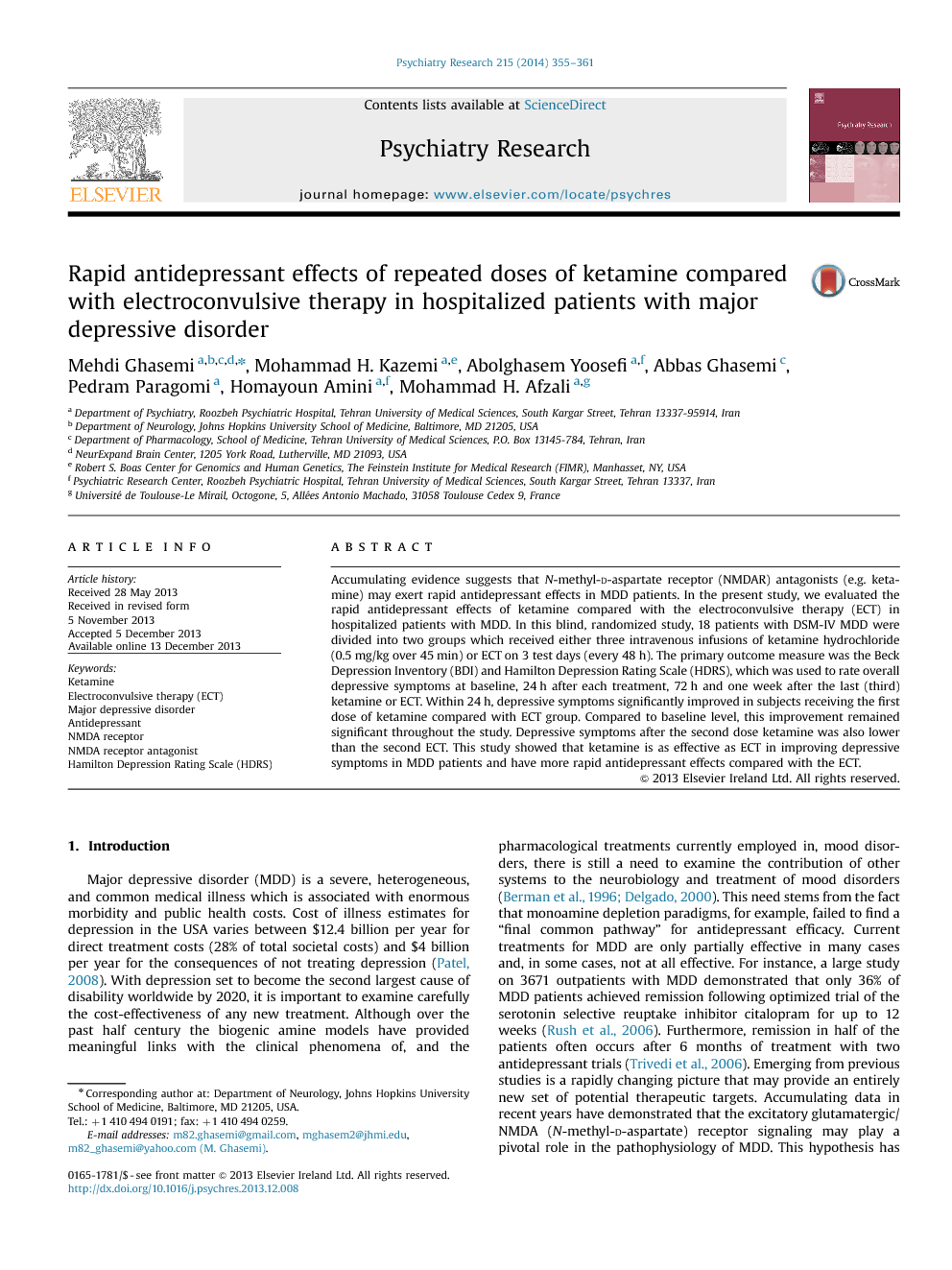 Accumulating evidence suggests that N-methyl-d-aspartate receptor (NMDAR) antagonists (e.g. ketamine) may exert rapid antidepressant effects in MDD patients. In the present study, we evaluated the rapid antidepressant effects of ketamine compared with the electroconvulsive therapy (ECT) in hospitalized patients with MDD. In this blind, randomized study, 18 patients with DSM-IV MDD were divided into two groups which received either three intravenous infusions of ketamine hydrochloride (0.5 mg/kg over 45 min) or ECT on 3 test days (every 48 h). The primary outcome measure was the Beck Depression Inventory (BDI) and Hamilton Depression Rating Scale (HDRS), which was used to rate overall depressive symptoms at baseline, 24 h after each treatment, 72 h and one week after the last (third) ketamine or ECT. Within 24 h, depressive symptoms significantly improved in subjects receiving the first dose of ketamine compared with ECT group. Compared to baseline level, this improvement remained significant throughout the study. Depressive symptoms after the second dose ketamine was also lower than the second ECT. This study showed that ketamine is as effective as ECT in improving depressive symptoms in MDD patients and have more rapid antidepressant effects compared with the ECT.

Major depressive disorder (MDD) is a severe, heterogeneous, and common medical illness which is associated with enormous morbidity and public health costs. Cost of illness estimates for depression in the USA varies between $12.4 billion per year for direct treatment costs (28% of total societal costs) and $4 billion per year for the consequences of not treating depression (Patel, 2008). With depression set to become the second largest cause of disability worldwide by 2020, it is important to examine carefully the cost-effectiveness of any new treatment. Although over the past half century the biogenic amine models have provided meaningful links with the clinical phenomena of, and the pharmacological treatments currently employed in, mood disorders, there is still a need to examine the contribution of other systems to the neurobiology and treatment of mood disorders (Berman et al., 2000 and Delgado, 2000). This need stems from the fact that monoamine depletion paradigms, for example, failed to find a “final common pathway” for antidepressant efficacy. Current treatments for MDD are only partially effective in many cases and, in some cases, not at all effective. For instance, a large study on 3671 outpatients with MDD demonstrated that only 36% of MDD patients achieved remission following optimized trial of the serotonin selective reuptake inhibitor citalopram for up to 12 weeks (Rush et al., 2006). Furthermore, remission in half of the patients often occurs after 6 months of treatment with two antidepressant trials (Trivedi et al., 2006). Emerging from previous studies is a rapidly changing picture that may provide an entirely new set of potential therapeutic targets. Accumulating data in recent years have demonstrated that the excitatory glutamatergic/NMDA (N-methyl-d-aspartate) receptor signaling may play a pivotal role in the pathophysiology of MDD. This hypothesis has arisen from many observations by many investigators worldwide. Among NMDA receptor antagonists, ketamine has been investigated in both clinical and pre-clinical studies on mood disorders (for review see Ghasemi, 2013). Both clinical and pre-clinical data have robustly shown that ketamine could exert antidepressant effects and could be a promising drug for rapid improvement of major depression, especially in treatment-resistant MDD patients. Electroconvulsive therapy (ECT) is recognized as a highly beneficial treatment of unipolar and bipolar depression (Kellner et al., 2012). ECT has generally a more rapid onset of action than conventional antidepressants do, but the limited data on the onset of ECT's antidepressant action suggest that a range of 5–7 treatments (approximately 2 weeks) are required, on average, to cause a significant reduction in symptom severity, varying some by position of lead placement and stimulus intensity (Nobler et al., 1997 and Kellner et al., 2012). On the other hand, the antidepressant effect exerted by ketamine in previous preliminary studies is consistently observed within the first few hours of its administration, with response rates ranging from 50% to 90%, 1–3 days after a single injection of ketamine (Aan Het Rot et al., 2012 and Ghasemi, 2013). This rapid antidepressant effect is also in contrast to traditional monoamine-based antidepressants that take weeks to months to reach their full antidepressant effect (Katz et al., 2004), with response rates between 40% and 50% (Trivedi et al., 2006). A prospective study (Okamoto et al., 2010) comparing ketamine (0.86 mg/kg) to propofol (0.94 mg/kg) for ECT anesthesia also demonstrated that ketamine is associated with an earlier antidepressant response during the first 2 weeks of ECT. Although these data has suggested that ketamine can potentiate antidepressant effects of ECT in MDD, the fact that whether ketamine is as effective as ECT in MDD needs to be further investigated. Therefore, the aim of the present study was to investigate the antidepressant effects of ketamine in comparison with ECT in hospitalized MDD patients experiencing a major depressive episode.