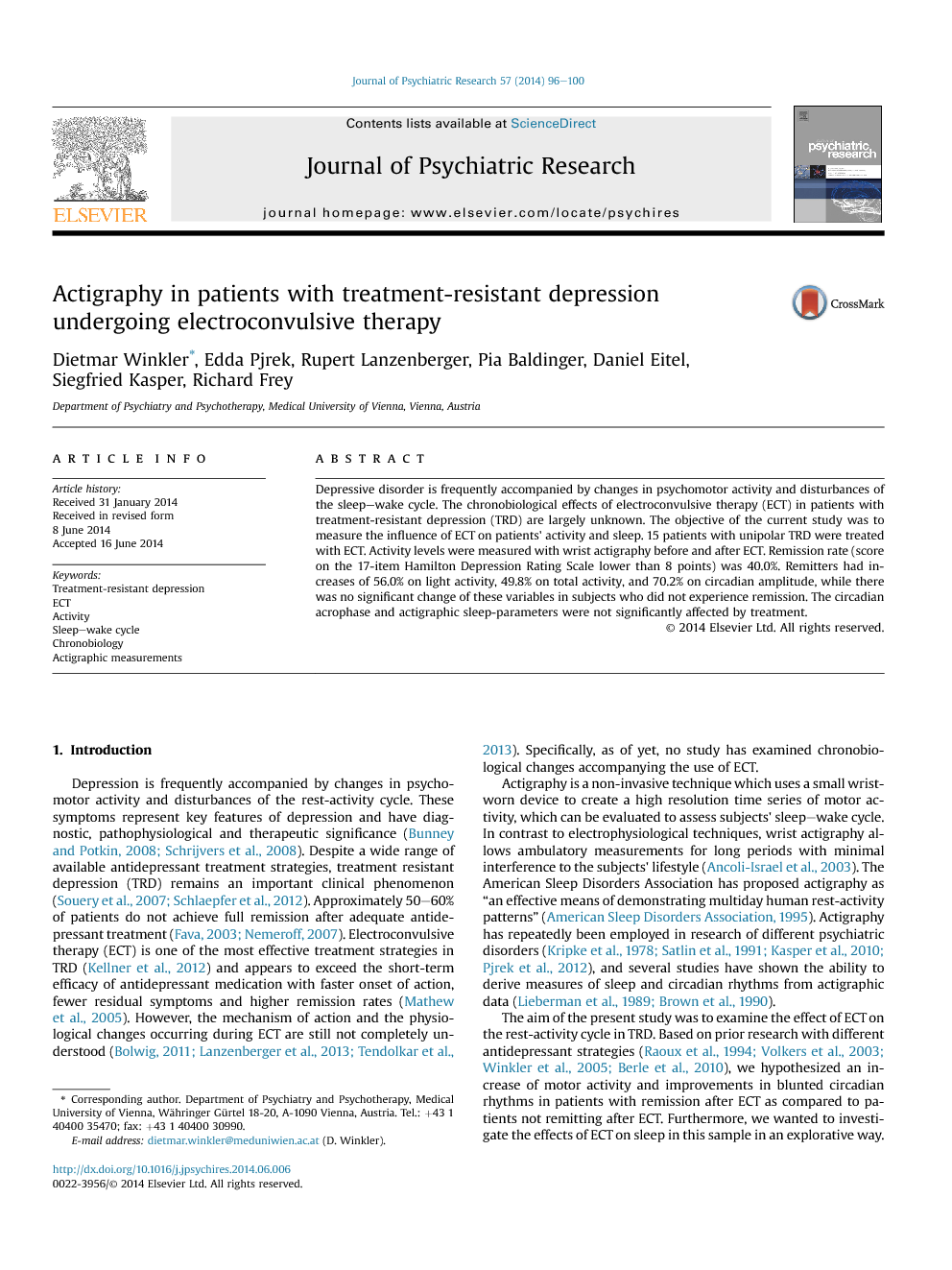 Depressive disorder is frequently accompanied by changes in psychomotor activity and disturbances of the sleep–wake cycle. The chronobiological effects of electroconvulsive therapy (ECT) in patients with treatment-resistant depression (TRD) are largely unknown. The objective of the current study was to measure the influence of ECT on patients' activity and sleep. 15 patients with unipolar TRD were treated with ECT. Activity levels were measured with wrist actigraphy before and after ECT. Remission rate (score on the 17-item Hamilton Depression Rating Scale lower than 8 points) was 40.0%. Remitters had increases of 56.0% on light activity, 49.8% on total activity, and 70.2% on circadian amplitude, while there was no significant change of these variables in subjects who did not experience remission. The circadian acrophase and actigraphic sleep-parameters were not significantly affected by treatment.

Depression is frequently accompanied by changes in psychomotor activity and disturbances of the rest-activity cycle. These symptoms represent key features of depression and have diagnostic, pathophysiological and therapeutic significance (Bunney and Potkin, 2008 and Schrijvers et al., 2008). Despite a wide range of available antidepressant treatment strategies, treatment resistant depression (TRD) remains an important clinical phenomenon (Souery et al., 2007 and Schlaepfer et al., 2012). Approximately 50–60% of patients do not achieve full remission after adequate antidepressant treatment (Fava, 2003 and Nemeroff, 2007). Electroconvulsive therapy (ECT) is one of the most effective treatment strategies in TRD (Kellner et al., 2012) and appears to exceed the short-term efficacy of antidepressant medication with faster onset of action, fewer residual symptoms and higher remission rates (Mathew et al., 2005). However, the mechanism of action and the physiological changes occurring during ECT are still not completely understood (Bolwig, 2011, Lanzenberger et al., 2013 and Tendolkar et al., 2013). Specifically, as of yet, no study has examined chronobiological changes accompanying the use of ECT. Actigraphy is a non-invasive technique which uses a small wrist-worn device to create a high resolution time series of motor activity, which can be evaluated to assess subjects' sleep–wake cycle. In contrast to electrophysiological techniques, wrist actigraphy allows ambulatory measurements for long periods with minimal interference to the subjects' lifestyle (Ancoli-Israel et al., 2003). The American Sleep Disorders Association has proposed actigraphy as “an effective means of demonstrating multiday human rest-activity patterns” (American Sleep Disorders Association, 1995). Actigraphy has repeatedly been employed in research of different psychiatric disorders (Kripke et al., 1978, Satlin et al., 1991, Kasper et al., 2010 and Pjrek et al., 2012), and several studies have shown the ability to derive measures of sleep and circadian rhythms from actigraphic data (Lieberman et al., 1989 and Brown et al., 1990). The aim of the present study was to examine the effect of ECT on the rest-activity cycle in TRD. Based on prior research with different antidepressant strategies (Raoux et al., 1994, Volkers et al., 2003, Winkler et al., 2005 and Berle et al., 2010), we hypothesized an increase of motor activity and improvements in blunted circadian rhythms in patients with remission after ECT as compared to patients not remitting after ECT. Furthermore, we wanted to investigate the effects of ECT on sleep in this sample in an explorative way.