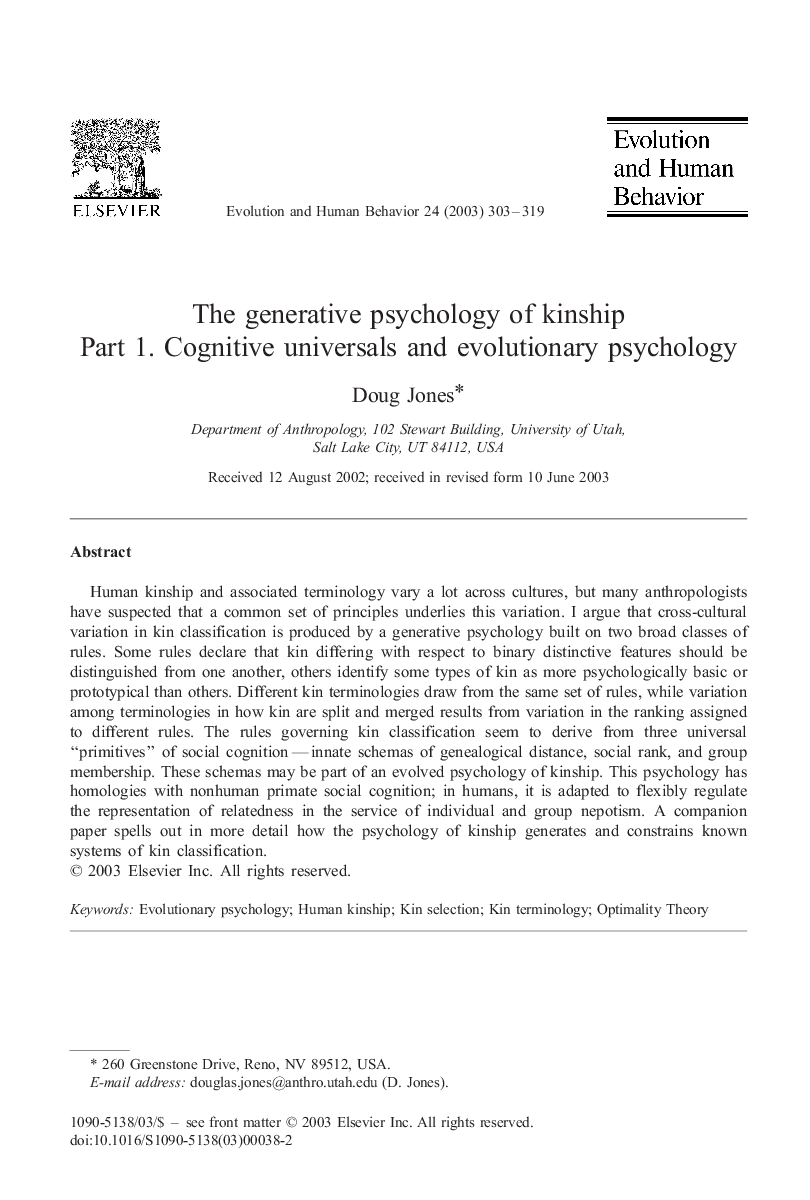 Human kinship and associated terminology vary a lot across cultures, but many anthropologists have suspected that a common set of principles underlies this variation. I argue that cross-cultural variation in kin classification is produced by a generative psychology built on two broad classes of rules. Some rules declare that kin differing with respect to binary distinctive features should be distinguished from one another, others identify some types of kin as more psychologically basic or prototypical than others. Different kin terminologies draw from the same set of rules, while variation among terminologies in how kin are split and merged results from variation in the ranking assigned to different rules. The rules governing kin classification seem to derive from three universal “primitives” of social cognition—innate schemas of genealogical distance, social rank, and group membership. These schemas may be part of an evolved psychology of kinship. This psychology has homologies with nonhuman primate social cognition; in humans, it is adapted to flexibly regulate the representation of relatedness in the service of individual and group nepotism. A companion paper spells out in more detail how the psychology of kinship generates and constrains known systems of kin classification.

Human kinship is a tantalizing combination of cross-cultural variation and cultural universals. Principles for reckoning descent, theories of procreation, definitions of incest, rules of marriage, the balance of amity and rivalry between kin, the nexus between kinship and other bases of social organization—all vary widely across cultures. Yet, many anthropologists believe that this variation is structured and constrained by universals of cognition and experience. This study investigates cognitive universals of kinship using tools from linguistics. Anthropologists have long noted that there is great cross-cultural variation in kin classification—in the ways different terminologies distinguish some kin and lump others together—so that the principles of one system often seem illogical from the perspective of another. Yet, this variation is actually quite systematic: Similar systems show up repeatedly in widely separated areas, while many logically possible simple types are rare or nonexistent. I argue that cross-cultural variation in kin classification is produced by a generative psychology, in which a wide range of surface variation results from combining a modest number of universal constraints according to a small set of principles. Generative systems are familiar from other areas of science, including chemistry, genetics, and various domains of mental representation including visual perception, phonology, and syntax Abler, 1989, Baker, 2001, Biederman, 1987, Corballis, 1992 and Pinker & Prince, 1996. In each of these cases, a modest collection of elements can be combined according to a set of rules to produce a large (sometimes astronomical) number of variants whose properties are novel, and not just a blend or average of the properties of their constituents. Thus, following an analogy with chemistry (Baker, 2001), we could say that the present study is concerned with finding the “atoms” of kin classification, and rules for combining them into compounds. Or, following an analogy with linguistics, that it is concerned with finding an evolved “Universal Grammar” governing culturally specific systems of kin classification. This study is divided into two papers. The present, less formal paper begins by considering two broad classes of rules involved in kin classification. Some rules declare that kin differing with respect to binary distinctive features should be distinguished from one another. Other rules identify some types of kin as more psychologically basic or prototypical than others, with terms for these taking priority over terms for more psychologically marginal kin. Orthogonal to this division between splitting and lumping tendencies runs another threefold distinction: The principles of kin classification seem to derive from three meta-principles, which can be labeled genealogical distance, social rank, and group membership. I argue that these three meta-principles are universal “primitives” of social cognition: They are the foundation of a generative psychology of kinship that bears the hallmarks of evolution by natural selection. They have evolutionary antecedents among nonhuman primates. And among humans, they are used in different configurations to construct culturally variable representations of kinship that can adaptively regulate individual and group nepotism. The companion paper turns from the descriptive and evolutionary themes of the first paper to a formal analysis of how a small set of principles can be combined in different ways to generate empirically known kin terminologies without generating terminologies that are logically possible but nonexistent or very rare. This paper makes use of a powerful new approach to rules of language called Optimality Theory (OT), according to which, approximately, surface variation in language rules results from variation in rankings among a universal set of constraints. OT, applied here to terminologies for aunts, uncles, and cousins, provides a novel analysis of variation and universals that seems to bridge the gaps between earlier informal and formal approaches to kin classification. Together, the two papers constitute an argument against the common claim in cultural anthropology that human kinship systems and kin classifications vary arbitrarily, without respect to biological relatedness or adaptive design.