عنوان انگلیسی
Constructions of masculinity and their influence on men's well-being: a theory of gender and health
دانلود فوری مقاله + سفارش ترجمه 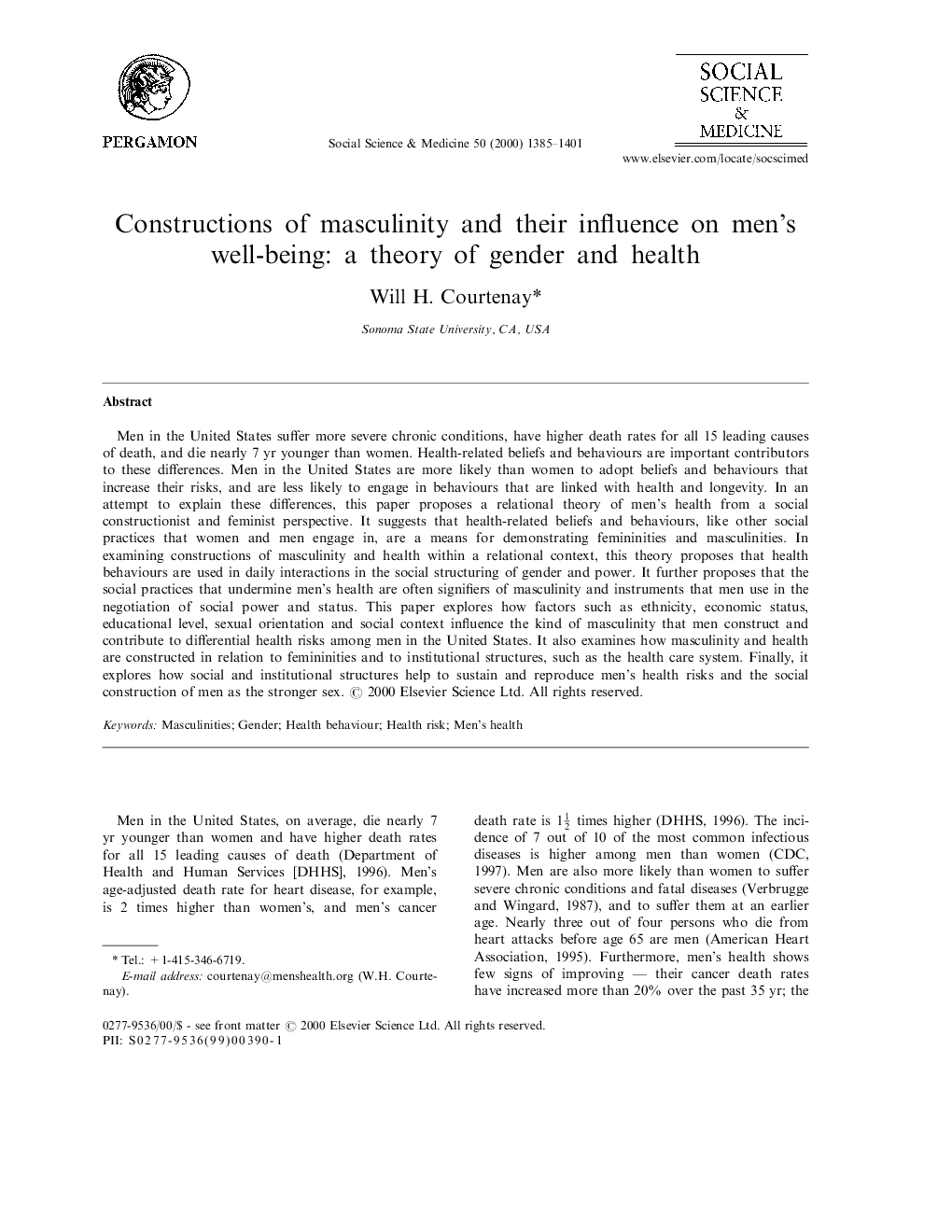 Men in the United States suffer more severe chronic conditions, have higher death rates for all 15 leading causes of death, and die nearly 7 yr younger than women. Health-related beliefs and behaviours are important contributors to these differences. Men in the United States are more likely than women to adopt beliefs and behaviours that increase their risks, and are less likely to engage in behaviours that are linked with health and longevity. In an attempt to explain these differences, this paper proposes a relational theory of men's health from a social constructionist and feminist perspective. It suggests that health-related beliefs and behaviours, like other social practices that women and men engage in, are a means for demonstrating femininities and masculinities. In examining constructions of masculinity and health within a relational context, this theory proposes that health behaviours are used in daily interactions in the social structuring of gender and power. It further proposes that the social practices that undermine men's health are often signifiers of masculinity and instruments that men use in the negotiation of social power and status. This paper explores how factors such as ethnicity, economic status, educational level, sexual orientation and social context influence the kind of masculinity that men construct and contribute to differential health risks among men in the United States. It also examines how masculinity and health are constructed in relation to femininities and to institutional structures, such as the health care system. Finally, it explores how social and institutional structures help to sustain and reproduce men's health risks and the social construction of men as the stronger sex.

Men in the United States, on average, die nearly 7 yr younger than women and have higher death rates for all 15 leading causes of death (Department of Health and Human Services [DHHS], 1996). Men's age-adjusted death rate for heart disease, for example, is 2 times higher than women's, and men's cancer death rate is 1Full-size image (<1 K) times higher (DHHS, 1996). The incidence of 7 out of 10 of the most common infectious diseases is higher among men than women (CDC, 1997). Men are also more likely than women to suffer severe chronic conditions and fatal diseases (Verbrugge and Wingard, 1987), and to suffer them at an earlier age. Nearly three out of four persons who die from heart attacks before age 65 are men (American Heart Association, 1995). Furthermore, men's health shows few signs of improving — their cancer death rates have increased more than 20% over the past 35 yr; the rates for women have remained unchanged during the same period (American Cancer Society, 1994).

Research consistently demonstrates that women in the United States adopt healthier beliefs and personal health practices than men. A wealth of scientific data suggests that this distinction accounts in no small part for the fact that women suffer less severe chronic conditions and live nearly 7 yr longer than men. From a social constructionist perspective, this distinction can be understood as being among the many differences that women and men are expected to demonstrate. If men want to demonstrate dominant ideals of manhood as defined in North American society, they must adhere to cultural definitions of masculine beliefs and behaviours and actively reject what is feminine. The resources available in the United States for constructing masculinities — and the signifiers of “true” masculinity — are largely unhealthy. Men and boys do indeed use these resources and adopt unhealthy beliefs and behaviours in order to demonstrate manhood. Although nothing strictly prohibits a man from demonstrating masculinities differently, to do so would require that he cross over socially constructed gender boundaries, and risk reproach and sometimes physical danger for failing to demonstrate gender correctly. By successfully using unhealthy beliefs and behaviours to demonstrate idealised forms of masculinity, men are able to assume positions of power — relative to women and less powerful men — in a patriarchal society that rewards this accomplishment. By dismissing their health needs and taking risks, men legitimise themselves as the “stronger” sex. In this way, men's use of unhealthy beliefs and behaviours helps to sustain and reproduce social inequality and the social structures that, in turn, reinforce and reward men's poor health habits. It should be noted that some men do defy social prescriptions of masculinity and adopt healthy behaviours, such as getting annual physicals and eating healthy foods. But although these men are constructing a form of masculinity, it is not among the dominant forms that are encouraged in men, nor is it among the forms adopted by most men. It should also be noted that women can and do adopt unhealthy beliefs and behaviours to demonstrate femininities, as in the case of unhealthy dieting to attain a culturally defined body ideal of slimness. However, as has been demonstrated elsewhere (Courtenay, 1998a and Courtenay, 1999), the striving for cultural standards of femininity leads women to engage primarily in healthy, not unhealthy, behaviours. This relational theory of gender and men's health will undoubtedly meet with resistance from many quarters. As a society, we all work diligently at maintaining constructions of women's health as deficient, of the female body as inferior, of men's health as ideal, and of the male body as structurally efficient and superior. From a feminist perspective, these constructions can be viewed as preserving existing power structures and the many privileges enjoyed by men in the United States. Naming and confronting men's poor health status and unhealthy beliefs and behaviours may well improve their physical well-being, but it will necessarily undermine men's privileged position and threaten their power and authority in relation to women.