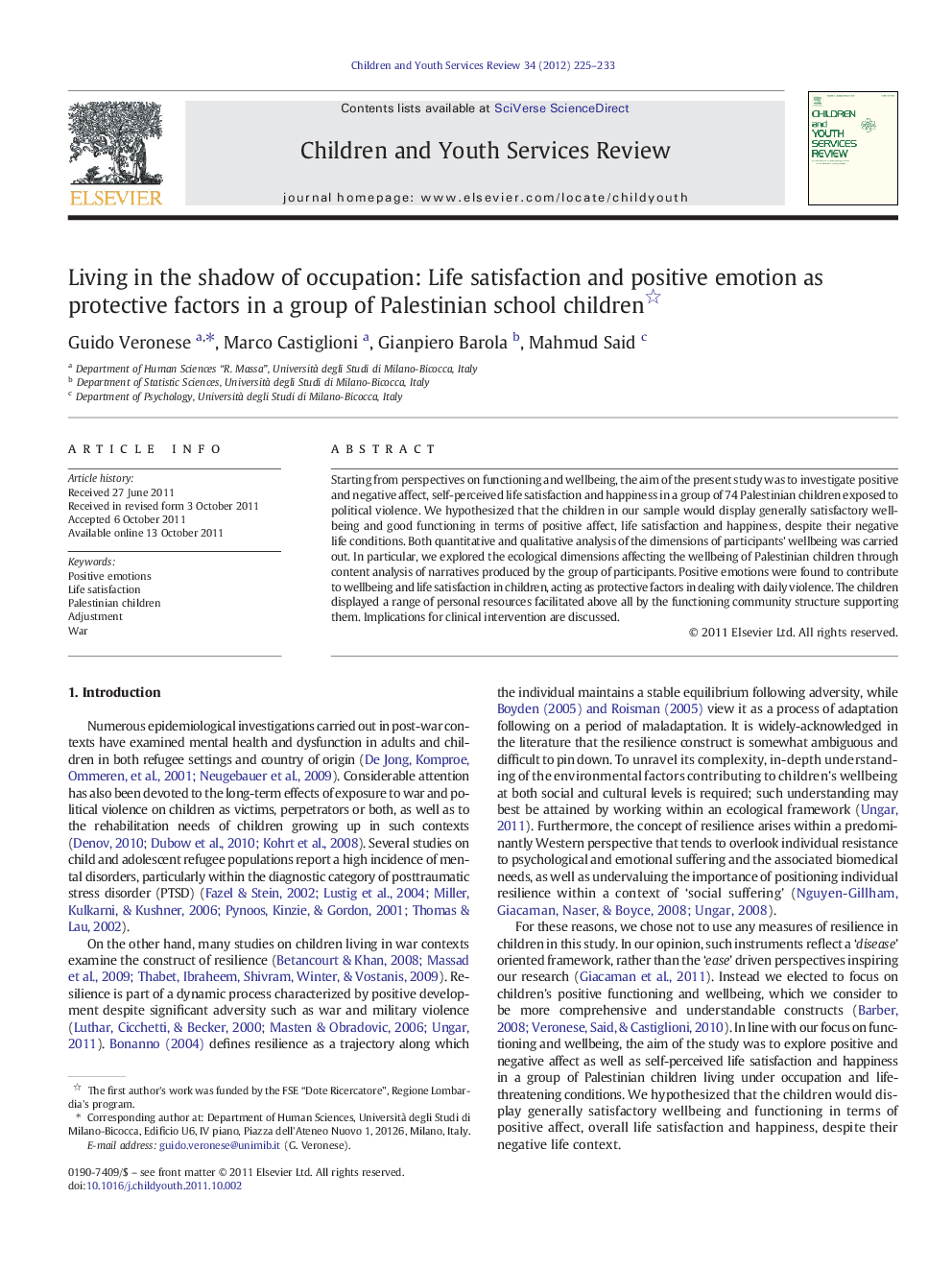 Starting from perspectives on functioning and wellbeing, the aim of the present study was to investigate positive and negative affect, self-perceived life satisfaction and happiness in a group of 74 Palestinian children exposed to political violence. We hypothesized that the children in our sample would display generally satisfactory wellbeing and good functioning in terms of positive affect, life satisfaction and happiness, despite their negative life conditions. Both quantitative and qualitative analysis of the dimensions of participants' wellbeing was carried out. In particular, we explored the ecological dimensions affecting the wellbeing of Palestinian children through content analysis of narratives produced by the group of participants. Positive emotions were found to contribute to wellbeing and life satisfaction in children, acting as protective factors in dealing with daily violence. The children displayed a range of personal resources facilitated above all by the functioning community structure supporting them. Implications for clinical intervention are discussed.

Numerous epidemiological investigations carried out in post-war contexts have examined mental health and dysfunction in adults and children in both refugee settings and country of origin (De Jong et al., 2001 and Neugebauer et al., 2009). Considerable attention has also been devoted to the long-term effects of exposure to war and political violence on children as victims, perpetrators or both, as well as to the rehabilitation needs of children growing up in such contexts (Denov, 2010, Dubow et al., 2010 and Kohrt et al., 2008). Several studies on child and adolescent refugee populations report a high incidence of mental disorders, particularly within the diagnostic category of posttraumatic stress disorder (PTSD) (Fazel and Stein, 2002, Lustig et al., 2004, Miller et al., 2006, Pynoos et al., 2001 and Thomas and Lau, 2002). On the other hand, many studies on children living in war contexts examine the construct of resilience (Betancourt and Khan, 2008, Massad et al., 2009 and Thabet et al., 2009). Resilience is part of a dynamic process characterized by positive development despite significant adversity such as war and military violence (Luthar et al., 2000, Masten and Obradovic, 2006 and Ungar, 2011). Bonanno (2004) defines resilience as a trajectory along which the individual maintains a stable equilibrium following adversity, while Boyden, 2005 and Roisman, 2005 view it as a process of adaptation following on a period of maladaptation. It is widely-acknowledged in the literature that the resilience construct is somewhat ambiguous and difficult to pin down. To unravel its complexity, in-depth understanding of the environmental factors contributing to children's wellbeing at both social and cultural levels is required; such understanding may best be attained by working within an ecological framework (Ungar, 2011). Furthermore, the concept of resilience arises within a predominantly Western perspective that tends to overlook individual resistance to psychological and emotional suffering and the associated biomedical needs, as well as undervaluing the importance of positioning individual resilience within a context of ‘social suffering’ (Nguyen-Gillham et al., 2008 and Ungar, 2008). For these reasons, we chose not to use any measures of resilience in children in this study. In our opinion, such instruments reflect a ‘disease’ oriented framework, rather than the ‘ease’ driven perspectives inspiring our research ( Giacaman et al., 2011). Instead we elected to focus on children's positive functioning and wellbeing, which we consider to be more comprehensive and understandable constructs ( Barber, 2008 and Veronese et al., 2010). In line with our focus on functioning and wellbeing, the aim of the study was to explore positive and negative affect as well as self-perceived life satisfaction and happiness in a group of Palestinian children living under occupation and life-threatening conditions. We hypothesized that the children would display generally satisfactory wellbeing and functioning in terms of positive affect, overall life satisfaction and happiness, despite their negative life context. We also aimed to explore the dimensions affecting the wellbeing of Palestinian children by carrying out content analysis of narratives produced by the same group of participants. We believe that reinforcing dimensions of wellbeing can help to reduce the negative consequences of exposure to political violence and war. In fact, positive emotions and relative life satisfaction may be protective factors which enable positive adjustment to trauma in children (Bonanno & Mancini, 2010). Implications for clinical work will be discussed