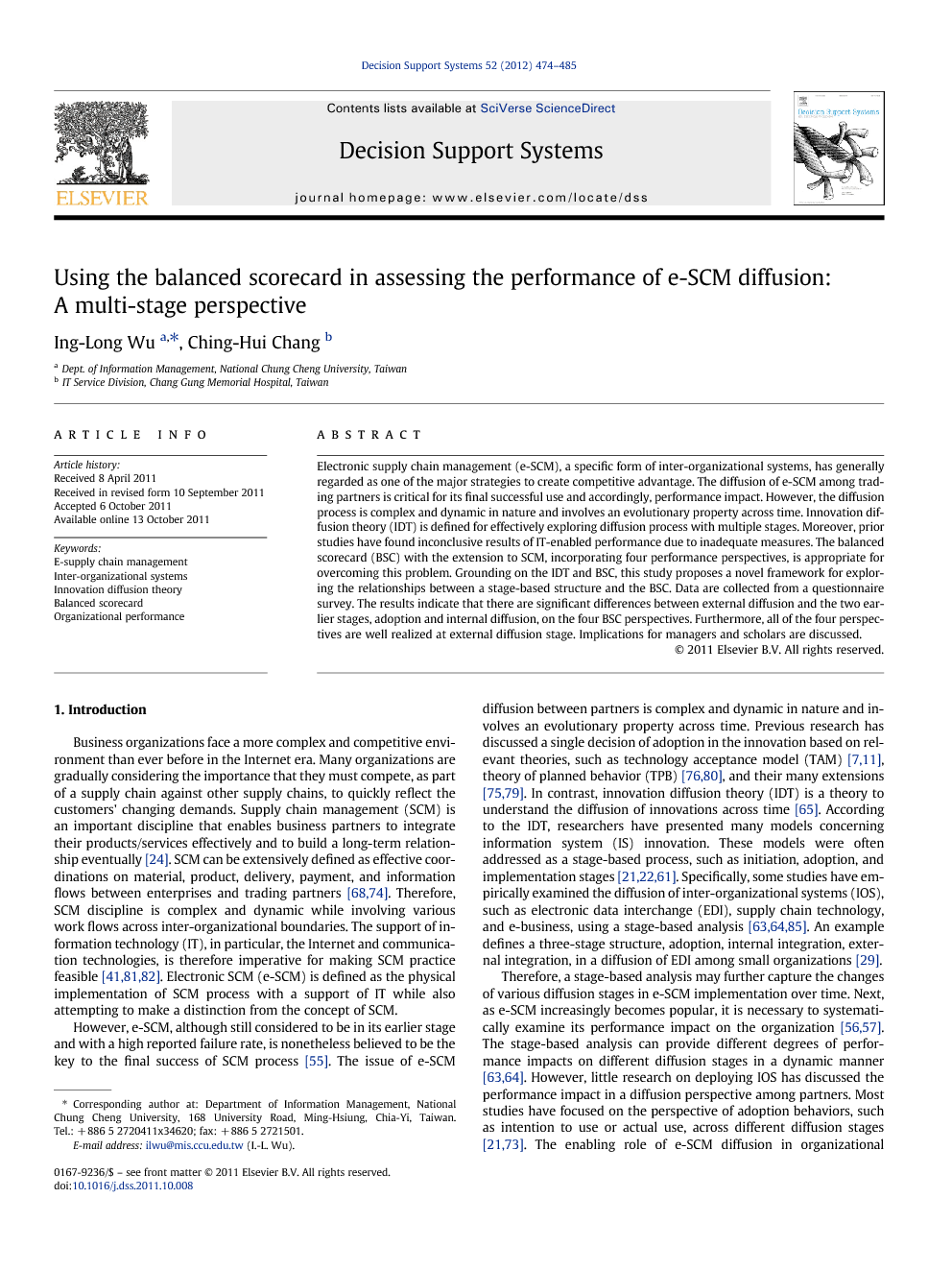 Electronic supply chain management (e-SCM), a specific form of inter-organizational systems, has generally regarded as one of the major strategies to create competitive advantage. The diffusion of e-SCM among trading partners is critical for its final successful use and accordingly, performance impact. However, the diffusion process is complex and dynamic in nature and involves an evolutionary property across time. Innovation diffusion theory (IDT) is defined for effectively exploring diffusion process with multiple stages. Moreover, prior studies have found inconclusive results of IT-enabled performance due to inadequate measures. The balanced scorecard (BSC) with the extension to SCM, incorporating four performance perspectives, is appropriate for overcoming this problem. Grounding on the IDT and BSC, this study proposes a novel framework for exploring the relationships between a stage-based structure and the BSC. Data are collected from a questionnaire survey. The results indicate that there are significant differences between external diffusion and the two earlier stages, adoption and internal diffusion, on the four BSC perspectives. Furthermore, all of the four perspectives are well realized at external diffusion stage. Implications for managers and scholars are discussed.

Business organizations face a more complex and competitive environment than ever before in the Internet era. Many organizations are gradually considering the importance that they must compete, as part of a supply chain against other supply chains, to quickly reflect the customers' changing demands. Supply chain management (SCM) is an important discipline that enables business partners to integrate their products/services effectively and to build a long-term relationship eventually [24]. SCM can be extensively defined as effective coordinations on material, product, delivery, payment, and information flows between enterprises and trading partners [68] and [74]. Therefore, SCM discipline is complex and dynamic while involving various work flows across inter-organizational boundaries. The support of information technology (IT), in particular, the Internet and communication technologies, is therefore imperative for making SCM practice feasible [41], [81] and [82]. Electronic SCM (e-SCM) is defined as the physical implementation of SCM process with a support of IT while also attempting to make a distinction from the concept of SCM. However, e-SCM, although still considered to be in its earlier stage and with a high reported failure rate, is nonetheless believed to be the key to the final success of SCM process [55]. The issue of e-SCM diffusion between partners is complex and dynamic in nature and involves an evolutionary property across time. Previous research has discussed a single decision of adoption in the innovation based on relevant theories, such as technology acceptance model (TAM) [7] and [11], theory of planned behavior (TPB) [76] and [80], and their many extensions [75] and [79]. In contrast, innovation diffusion theory (IDT) is a theory to understand the diffusion of innovations across time [65]. According to the IDT, researchers have presented many models concerning information system (IS) innovation. These models were often addressed as a stage-based process, such as initiation, adoption, and implementation stages [21], [22] and [61]. Specifically, some studies have empirically examined the diffusion of inter-organizational systems (IOS), such as electronic data interchange (EDI), supply chain technology, and e-business, using a stage-based analysis [63], [64] and [85]. An example defines a three-stage structure, adoption, internal integration, external integration, in a diffusion of EDI among small organizations [29]. Therefore, a stage-based analysis may further capture the changes of various diffusion stages in e-SCM implementation over time. Next, as e-SCM increasingly becomes popular, it is necessary to systematically examine its performance impact on the organization [56] and [57]. The stage-based analysis can provide different degrees of performance impacts on different diffusion stages in a dynamic manner [63] and [64]. However, little research on deploying IOS has discussed the performance impact in a diffusion perspective among partners. Most studies have focused on the perspective of adoption behaviors, such as intention to use or actual use, across different diffusion stages [21] and [73]. The enabling role of e-SCM diffusion in organizational performance has not received sufficient attention. Thus, an understanding of the linkage between e-SCM diffusion and organizational performance is our major goal in this study. Traditionally, most organizations have evaluated performance based largely on financial accounting methods. These methods are important in assessing whether operational changes are improving the financial health of a company, but insufficient to measure supply chain performance. These measures do not relate to important organizational strategies and non-financial performances, such as customer service and product quality [2], [42] and [65]. In addition, prior studies have found inconclusive results of IT productivity despite massive IT investments, namely IT productivity paradox [14] and [77]. A major reason may be due to the use of inappropriate measures in assessing IT values and has historically focused on financial ones, such as sales and profits [13]. Therefore, researchers suggested the need using more non-financial measures, such as customer satisfaction and product quality, although there is little agreement on precisely which measures to use [5] and [13]. This implies that the evaluation of e-SCM should cover both quantitative and qualitative measures in a complementary manner. The Balanced Scorecard (BSC) was initially developed by Kaplan and Norton [31]. The BSC proposes a balanced approach between financial and non-financial measures and specifically looks at a business from four perspectives: finance, customer, internal process, and learning and growth [32] and [33]. It has been widely applied in assessing organization-based performance in an internal basis in different industries. However, there are few studies in discussing its potential applications to evaluate SCM performance in an external basis [5] and [53]. One study suggested that the BSC can be extended to include inter-organizational process perspective in supply chain context [53]. That is, internal process has been generally redefined as business process for including both internal and external processes. Grounding on the IDT and BSC, this study thus proposes a new research model for using the extension-based BSC to assess the performance of e-SCM from a multi-stage diffusion perspective. Specifically, a three-stage structure, adoption, internal diffusion, and external diffusion, is defined based on a comprehensive literature review in e-SCM diffusion. In addition, many studies on the issue of adopting supply chain systems have suggested a moderating effect of some organizational characteristics, such as industry type and firm size, on the realization of firm performance [27], [62] and [72]. We thus specified industry type and firm size as two moderating variables.

More organizations have recognized e-SCM as an important issue of technology innovation and a source of differentiation advantage. Successful use of e-SCM among trading partners is the key to performance realization in host organizations. This study approaches the particular issue from a new consideration of integrating a stage-based diffusion structure and the BSC with different forms of organizational performance. It takes a thorough approach, in contrast to earlier studies, to show the performance realization process for the implementation of e-SCM. Important findings have been reported in this study. The three diffusion stages indicate different impacts on the four performance perspectives. In particular, significant differences have been reported between the final stage (external diffusion) and the two earlier stages (adoption and internal diffusion). Furthermore, the four performance perspectives are well realized at external diffusion stage. First, the issue on e-SCM diffusion has been particularly external focus on the collaboration among trading partners. Time-lag effect is the important determinant for effectively measuring organizational performance, in particular, customer and financial performances. In general, this can also provide insight to IT productivity paradox for effectively designing implementation program of technology innovation. This may be the major contribution of this research. The findings have a number of implications for practitioners. Practitioners will be able to design appropriate strategies to deal with e-SCM implementation problem due to understanding the performance achievement process with different forms of performance impacts. Next, while the focus of e-SCM diffusion is on the readiness of external activities in the supply chain, partners need to build a well-coordinated mechanism for managing these activities before deploying e-SCM. In addition, time-lag effect is a critical role for distinguishing different forms of organizational performance. In order to fully achieve customer or financial performance, an extended period of time is necessary for e-SCM implementation. The host organization needs to carefully examine the extent of e-SCM diffusion before any decision has to be made in terms of the collaborative effort in achieving SCM performance among trading partners. Finally, as many studies have noted the intermediate role of business process in IT-enabled performance, practitioners need to first nurture some organizational practices or capabilities, such as learning and growth and business process, in order to eventually reach their financial performance. Therefore, it is important for an organization in terms of the improvement of these organizational capabilities or practices through knowledge management mechanism or other training programs. Furthermore, future research could be based on this foundation. First, this research model is mainly verified by an empirical survey in this study. Subsequent research could particularly conduct a case study with a longitudinal observation to more deeply understand the usefulness of this framework in practice. Second, since a sample frame of this research was assembled from different industries, its conclusions were more general and comprehensive. Future research could be targeted at a particular industry, such as the service industry, to capture their similarities and differences between the two different research bases. Moreover, this would also provide more insight into e-SCM implementation practice in some particular industries. Finally, the primary goal of this study lies in examining the performance impacts of e-SCM diffusion on four performance perspectives in the BSC. Future research could further explore the influencing relationships among four performance perspectives. This would enable practitioners to effectively distribute their resources on the major drivers of performance achievement. As already noted, even though this research has provided some useful results, it still has some limitations. First, the response rate is lower than desirable despite making various efforts to improve it. This may be because target respondents may lack relevant experiences in deploying e-SCM diffusion with a multi-stage analysis in practice. However, the responding sample indicated no systematic non-response bias and was well representative of the study sample. Next, the target respondents in each firm were originally designed for general managers, vice general managers, and logistics/purchasing executives in SCM function. However, approximately 25% of the respondents were in the position of staff member. Since senior managers in the larger firms are usually busy, some questionnaires may be completed by their subordinates. In fact, staff members are those people who are physically responsible for the daily work. However, additional benefit would be an increase in the diversity of data sources with multiple informants and therefore, an increase in the variances of the variables of interest.