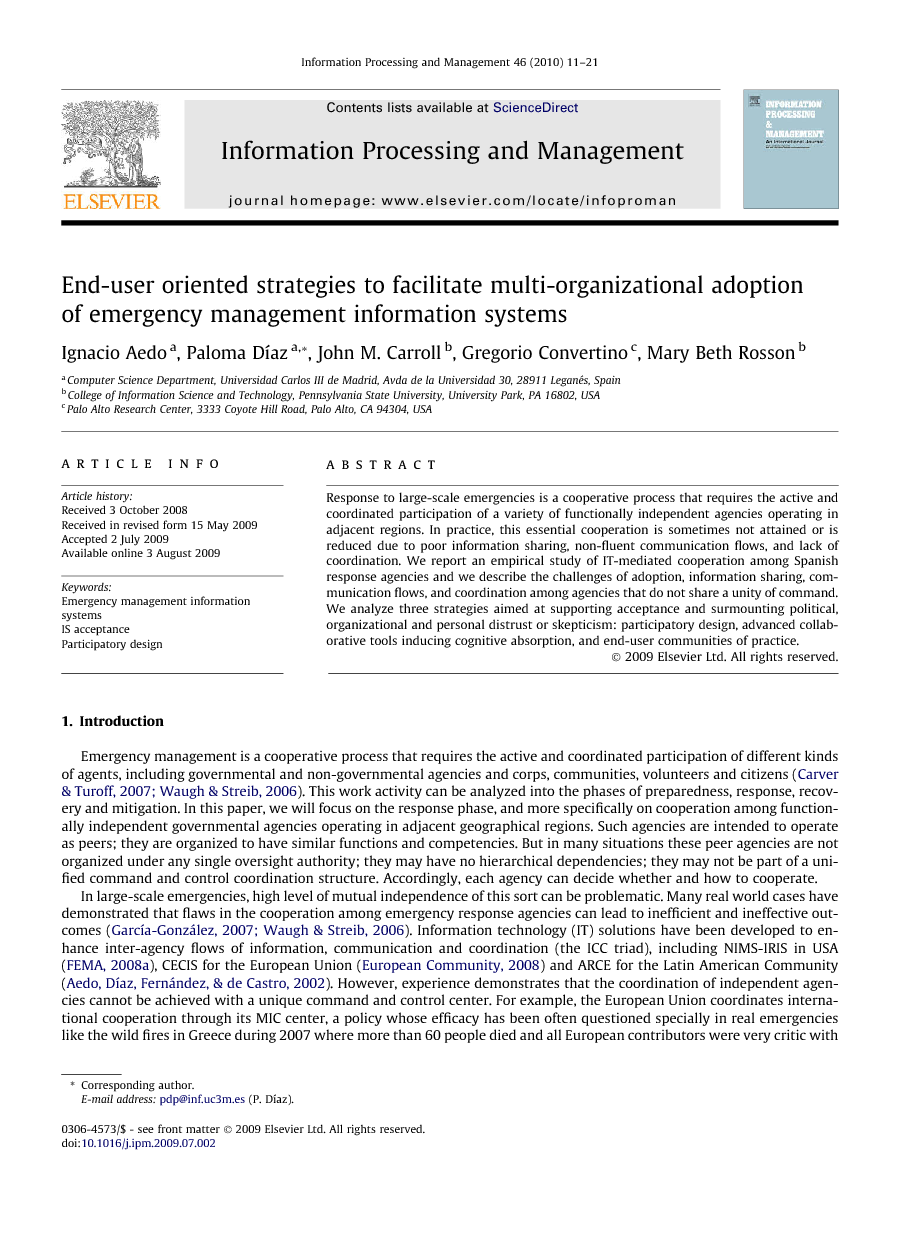 Response to large-scale emergencies is a cooperative process that requires the active and coordinated participation of a variety of functionally independent agencies operating in adjacent regions. In practice, this essential cooperation is sometimes not attained or is reduced due to poor information sharing, non-fluent communication flows, and lack of coordination. We report an empirical study of IT-mediated cooperation among Spanish response agencies and we describe the challenges of adoption, information sharing, communication flows, and coordination among agencies that do not share a unity of command. We analyze three strategies aimed at supporting acceptance and surmounting political, organizational and personal distrust or skepticism: participatory design, advanced collaborative tools inducing cognitive absorption, and end-user communities of practice.

Emergency management is a cooperative process that requires the active and coordinated participation of different kinds of agents, including governmental and non-governmental agencies and corps, communities, volunteers and citizens (Carver and Turoff, 2007 and Waugh and Streib, 2006). This work activity can be analyzed into the phases of preparedness, response, recovery and mitigation. In this paper, we will focus on the response phase, and more specifically on cooperation among functionally independent governmental agencies operating in adjacent geographical regions. Such agencies are intended to operate as peers; they are organized to have similar functions and competencies. But in many situations these peer agencies are not organized under any single oversight authority; they may have no hierarchical dependencies; they may not be part of a unified command and control coordination structure. Accordingly, each agency can decide whether and how to cooperate. In large-scale emergencies, high level of mutual independence of this sort can be problematic. Many real world cases have demonstrated that flaws in the cooperation among emergency response agencies can lead to inefficient and ineffective outcomes (García-González, 2007 and Waugh and Streib, 2006). Information technology (IT) solutions have been developed to enhance inter-agency flows of information, communication and coordination (the ICC triad), including NIMS-IRIS in USA (FEMA, 2008a), CECIS for the European Union (European Community, 2008) and ARCE for the Latin American Community (Aedo, Díaz, Fernández, & de Castro, 2002). However, experience demonstrates that the coordination of independent agencies cannot be achieved with a unique command and control center. For example, the European Union coordinates international cooperation through its MIC center, a policy whose efficacy has been often questioned specially in real emergencies like the wild fires in Greece during 2007 where more than 60 people died and all European contributors were very critic with the utility of that role of central coordinator played by the MIC. In this paper we focus on systems that make it possible to coordinate the action of independent agencies without imposing any artificial unique command and control structure. Our goal is to deploy emergency management information systems (EMIS so forth) that might contribute to support the coordination of loosely coupled tasks among different agencies. Such coordination tasks have fit dependencies in terms of the Coordination Theory (Malone, 2001), that is, they are performed in an independent way and all them are aimed at reaching a specific goal that, in our case, is a more efficient response to an emergency. EMIS might also support a fluent information flow among agencies to improve awareness, that is, to help independent agencies to understand what’s going on in the emergency, what’s needed and what are other agencies doing to avoid duplicities. It’s worth mentioning there that this is not a typical case of situational awareness since we are not dealing with an individual responder who has to evaluate a number of cues and signals to take an immediate decision; our focus is on operators working on decision centers of governmental agencies who have to understand which are the needs other agency has, what are other agencies doing and what can her agency do to contribute to mitigate the effects of a specific disaster. In this sense, we will be dealing with activity awareness as described in (Carroll, Neale, Isenhour, Rosson, & McCrickard, 2003) more than with moment-to-moment situational awareness as defined in (Endsley, 2000). It’s worth mentioning here that this is not either a collaborative work. Agencies might have different and competing goals and there isn’t a unique command and control center, therefore, this is not a case of highly coupled collaboration and group decision-making but of communication and coordination among independent agencies. In any case, EMIS can convey the right information at the right moment to the right person and in a way that is cognitively and physically usable for its end-users (Endsley, 2000), so that operators will have enough resources as to understand the situation (situation assessment) and come up with an adequate mental model of it (situation awareness). However, we shouldn’t forget that situation awareness is not created by the system, but it is an status of the operator of the system and, therefore, there are many other factors that will influence the operator´s conception of the situation (i.e., her situation awareness) as well as the evaluation of such situation and of the required actions (i.e., her situation assessment), including previous experience, expectations and goals, attention, relation with pairs, direct observation of the real world, etc. It is a question, however, whether merely providing information system support even having in mind improving situation awareness, is a sufficient solution. Many personal, organizational, and political factors influence acceptance of such systems, and in the context of functionally independent agencies there may be insufficient motivation to overcome these flaws. From a political point of view distrust might come from the fear to lose independence and autonomy whilst from an organizational point of view (i.e., within a given agency) systems might be rejected for the extra workload they imply. This paper focuses on the acceptance process of a specific EMIS for inter-agency cooperation, SIGAME (Montells, Montero, Díaz, Aedo, & de Castro, 2006) that has been developed for the Spanish Civil Protection Mechanism. Section 2 describes the system that was designed to meet known needs and mitigate know flaws. However, an empirical study reported in Section 3 demonstrates that end-users have continued to rely on traditional media, namely phone and fax. We use this empirical study to analyze in Section 4 some strategies to facilitate the acceptance of an EMIS in a multi-organizational context: applying a participatory design process to engage end-users as done before for other EMISs (Frishberg, 2005 and Kristensen et al., 2006) by integrating advanced tools providing users with experiences such as focused immersion, enjoyment, control, and curiosity that can improve cognitive absorption, and in turn acceptance (Agarwal & Karahanna, 2000); and, finally, using the EMIS to build a community of practice crossing the boundaries of a single organization where interpersonal relationships among end-users of the involved agencies might help to generate a better response capacity (Waugh & Streib, 2006).

The cooperation among autonomous governmental agencies of emergency response is not always an efficient process. Problems due to lack of information, disruption of communication, or poor coordination delay response and make it inefficient. Information systems could help to solve some of these problems, as far as they provide a way to share information and implement communication flows and coordination workflows. However, the main challenge when developing IS for inter-agency cooperation is to get a final acceptance from all the involved agencies. Developers cannot just rely on the quality of the system and then expect users will use it. Some strategies have to be applied in order to push the acceptance process, for which we propose focus on end-users and rely upon a ground up process, where political and organizational managers accept the system because end-users are willing to use it. The strategies we proposed include a participatory design process that involves end-users in most design decisions, the inclusion of communication and coordination tools that could induce in the emergency workers cognitive absorption experiences and consequently increase the behavioral intention of using the system and, finally, the use of the system to create a community of practice.