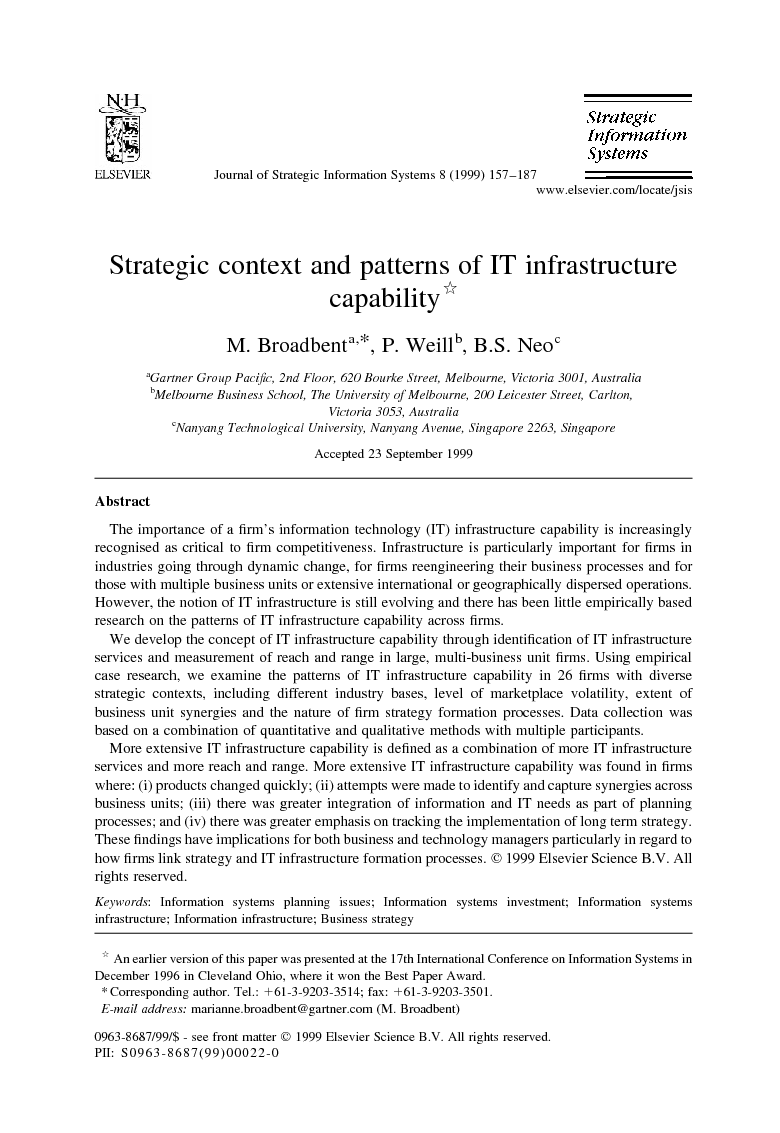 Although there is no single universally accepted definition of business strategy (Mintzberg and Quinn, 1991) a number of scholars emphasise the importance of choice. Porter (1996) argues that competitive strategy is about being different requiring the choice of a different set of activities and capabilities to deliver a unique mix of values. Markides (1999) identifies three dimensions where firms must make these choices: who to target as customers, what products to offer and how to undertake the related activities efficiently. Core competencies are at the centre of these strategic choices (Hamel, 1989 and Kay, 1993) to create and sustain advantages and implement effectively. Information technology (IT) infrastructure capability is a firm resource (Barney, 1991) and potential core competence that is difficult to imitate requiring a fusion of human and technical assets. IT infrastructure is increasingly seen as a fundamental differentiator in the competitive performance of firms (McKenney, 1995). New competitive strategies (Boynton et al., 1993) and progression through higher levels of organisational transformation (Davidson and Movizzo, 1996) each require major IT infrastructure investments. IT infrastructure capabilities underpin the emergence of new organisational forms (Davidow and Malone, 1992), such as global virtual corporations (Miller et al., 1993), facilitate electronic commerce via the development of virtual value chains (Rayport and Sviokla, 1995) and are part of a firm's strategic choices (Porter, 1996 and Markides, 1999). IT infrastructure capability is critical to globally competing firms (Clemons, 1989 and Neo, 1991) to provide connectivity and integration. IT infrastructure can be a significant barrier or enabler in the practical options available to planning and changing business processes (Grover, 1993 and Wastell, 1994). The support of enabling technologies and platforms is an important contributor to successful business process change (Caron, 1994 and Furey, 1994). Cross functional process changes require a shift in the role of the IT function from being guardians of information systems to providing infrastructure support, particularly in the form of data management expertise (Dixon, 1994 and Earl, 1994) and connectivity across areas and computer platforms. While the significance of IT infrastructure is now being recognised (Davenport and Linder, 1994), this is often as a by-product or retrospective analysis of the success of strategic initiatives or process change implementations. Knowledge of the value of IT infrastructure remains largely “in the realms of conjecture and anecdote” (Duncan 1995, p. 39). In this paper, we develop the concept of IT infrastructure capability through identification of IT infrastructure services and measurement of reach and range (Keen, 1991 and Keen, 1994) in large multi-business unit firms. We examine the patterns of IT infrastructure capability in 26 firms with diverse strategic contexts, such as different industries, different strategic intents and different levels of synergies between business units. We compare the number and nature of services and the level of reach and range to understand patterns of IT infrastructure capability and discuss the implications for both business and IT management.