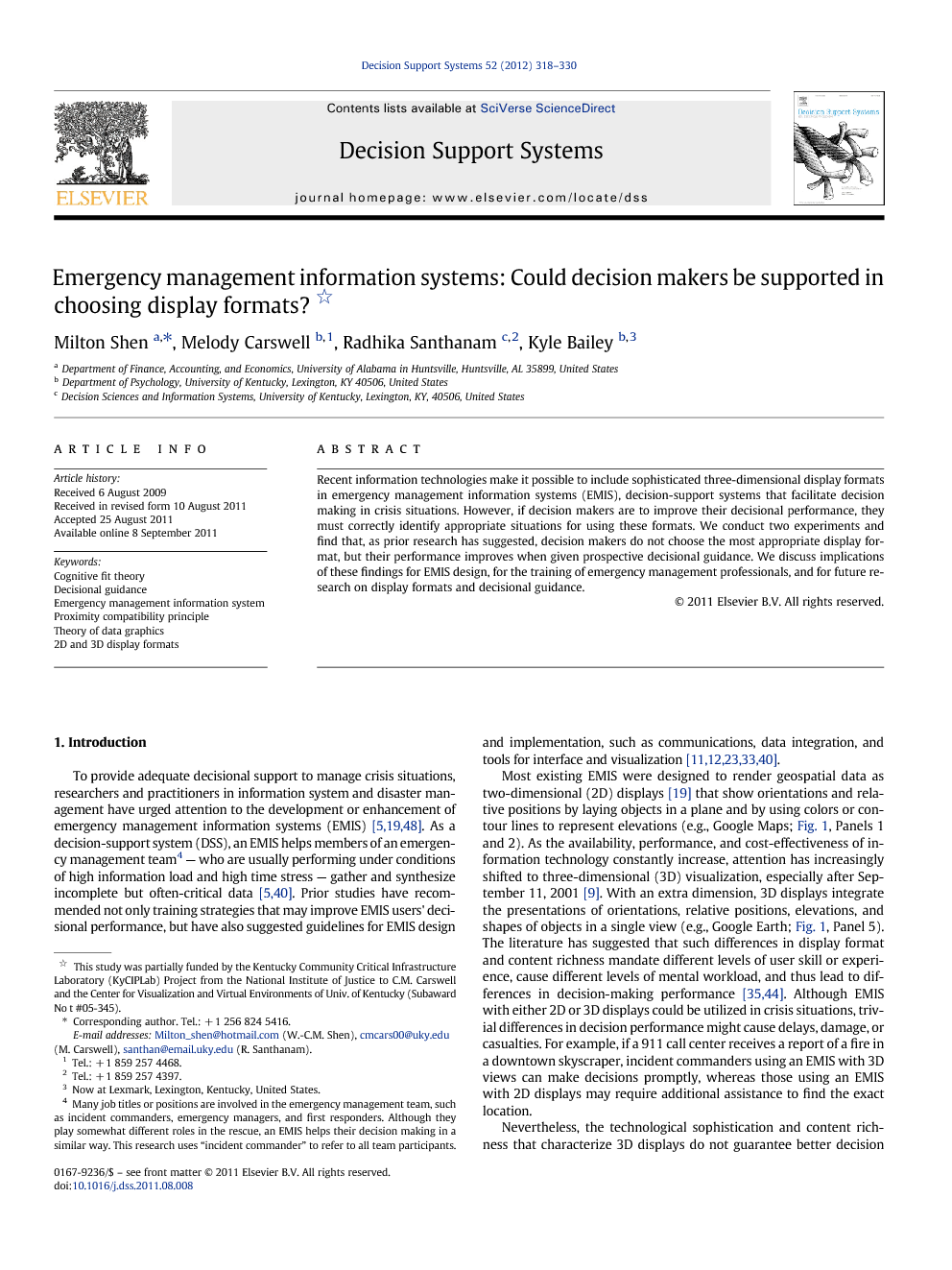 Recent information technologies make it possible to include sophisticated three-dimensional display formats in emergency management information systems (EMIS), decision-support systems that facilitate decision making in crisis situations. However, if decision makers are to improve their decisional performance, they must correctly identify appropriate situations for using these formats. We conduct two experiments and find that, as prior research has suggested, decision makers do not choose the most appropriate display format, but their performance improves when given prospective decisional guidance. We discuss implications of these findings for EMIS design, for the training of emergency management professionals, and for future research on display formats and decisional guidance.

To provide adequate decisional support to manage crisis situations, researchers and practitioners in information system and disaster management have urged attention to the development or enhancement of emergency management information systems (EMIS) [5], [19] and [48]. As a decision-support system (DSS), an EMIS helps members of an emergency management team4 — who are usually performing under conditions of high information load and high time stress — gather and synthesize incomplete but often-critical data [5] and [40]. Prior studies have recommended not only training strategies that may improve EMIS users' decisional performance, but have also suggested guidelines for EMIS design and implementation, such as communications, data integration, and tools for interface and visualization [11], [12], [23], [33] and [40]. Most existing EMIS were designed to render geospatial data as two-dimensional (2D) displays [19] that show orientations and relative positions by laying objects in a plane and by using colors or contour lines to represent elevations (e.g., Google Maps; Fig. 1, Panels 1 and 2). As the availability, performance, and cost-effectiveness of information technology constantly increase, attention has increasingly shifted to three-dimensional (3D) visualization, especially after September 11, 2001 [9]. With an extra dimension, 3D displays integrate the presentations of orientations, relative positions, elevations, and shapes of objects in a single view (e.g., Google Earth; Fig. 1, Panel 5). The literature has suggested that such differences in display format and content richness mandate different levels of user skill or experience, cause different levels of mental workload, and thus lead to differences in decision-making performance [35] and [44]. Although EMIS with either 2D or 3D displays could be utilized in crisis situations, trivial differences in decision performance might cause delays, damage, or casualties. For example, if a 911 call center receives a report of a fire in a downtown skyscraper, incident commanders using an EMIS with 3D views can make decisions promptly, whereas those using an EMIS with 2D displays may require additional assistance to find the exact location. Nevertheless, the technological sophistication and content richness that characterize 3D displays do not guarantee better decision making for all tasks; on the contrary, prior studies in human factors and ergonomics suggest that 2D displays are more useful than 3D when the tasks require judgments on orientation or relative positions, but not on elevations, sizes, or shapes [4], [35] and [36]. In the domain of MIS research, cognitive fit theory (CFT) proposes that the correspondence between task requirements and the information presentation format determines problem-solving performance [41] and [42], suggesting that the dimensionality itself is not the sole determinant of decision performance. Both streams of research suggest a hybrid EMIS that allows users to switch between visual displays flexibly. Two immediate questions arise: Can EMIS users accurately select display formats with the appropriate dimensionality (i.e., 2D vs. 3D) when given a choice? If not, can they be trained or supported by decisional guidance (DG) to choose appropriate display formats? We conducted two related experiments to address these questions. First, using previously validated experimental instruments [4], we examined whether novice EMIS users can choose appropriate display formats without guidance. Specifically, research participants were required to select among several 2D and 3D displays to deal with several tasks that each required different information. Based on the results of this experiment, we found that although participants matched display formats to tasks at a rate reliably better than what would be expected by chance, there was still considerable room for improvement in their display selection performance. Thus, in Experiment 2 we explored whether participants made better display format selections after they were exposed to DG about the functionality of the different formats. The combined results from our experiments suggested that novice EMIS users may not automatically choose the best display format for a task, but DG could significantly improve their performance. Indeed, both DG and training are designed to equip DSS users/trainees with the knowledge and capability to make better decisions. From various formats of DG [29] we chose to examine the impacts of a prospective DG, where decisional supports are provided prior to decision making. Such decisional guidance, as implemented in our study, might also be seen as a form of training. Although examining only a single type of DG, we believe our research serves as a motivator for future research on other formats of DG and yields implications for EMIS design, for the training of emergency management professionals, and for more basic research on information design. The rest of this paper is structured as follows. In Section 2, we provide an overview of theoretical foundations and principles that guided our research hypotheses. Section 3 proposes the framework of the research and experiments. We present the experimental methods and results of our two experiments in 4 and 5, respectively. Section 6 concludes the paper with a discussion of our findings and implications for practice and for future research.