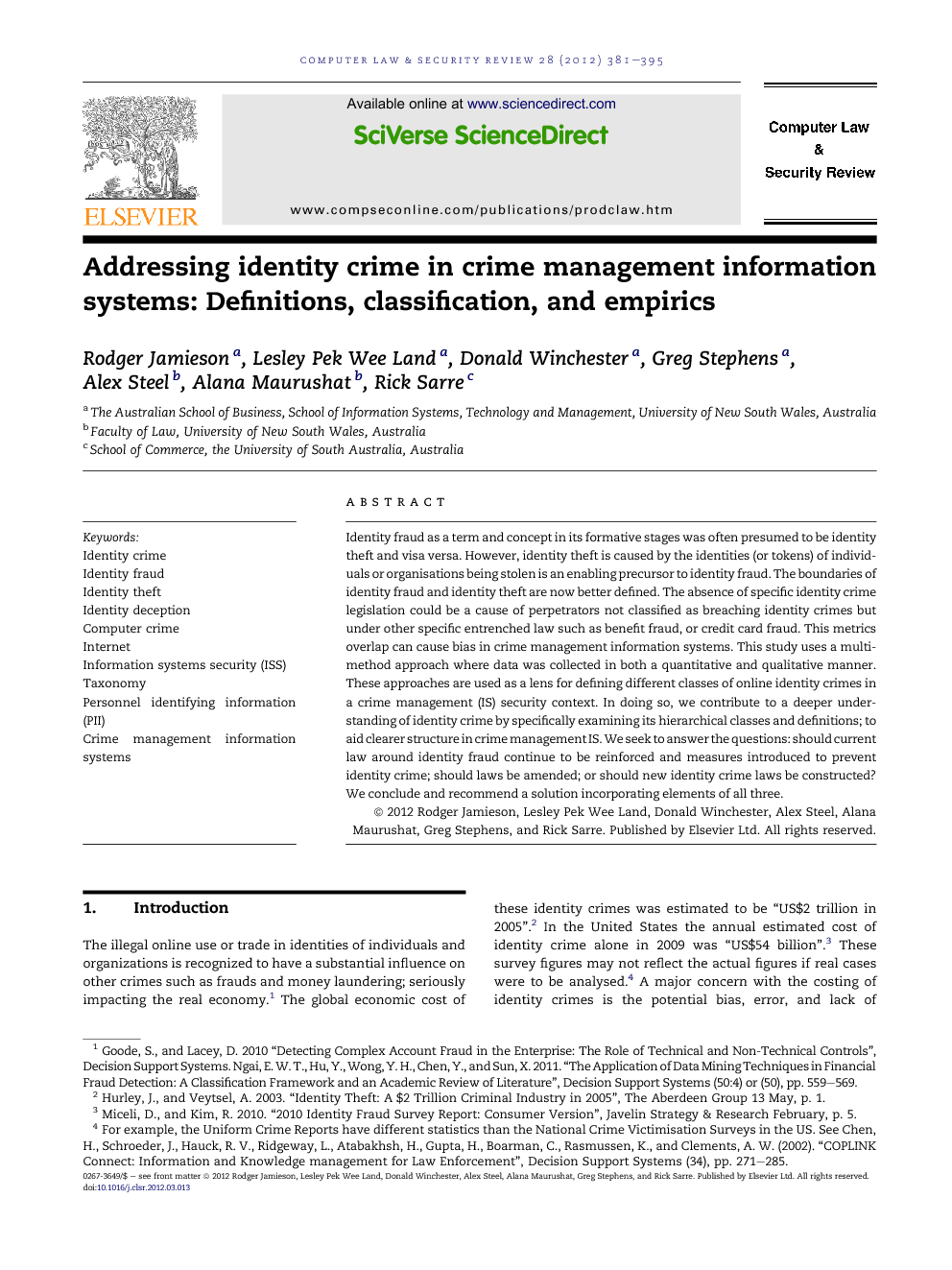 Identity fraud as a term and concept in its formative stages was often presumed to be identity theft and visa versa. However, identity theft is caused by the identities (or tokens) of individuals or organisations being stolen is an enabling precursor to identity fraud. The boundaries of identity fraud and identity theft are now better defined. The absence of specific identity crime legislation could be a cause of perpetrators not classified as breaching identity crimes but under other specific entrenched law such as benefit fraud, or credit card fraud. This metrics overlap can cause bias in crime management information systems. This study uses a multi-method approach where data was collected in both a quantitative and qualitative manner. These approaches are used as a lens for defining different classes of online identity crimes in a crime management (IS) security context. In doing so, we contribute to a deeper understanding of identity crime by specifically examining its hierarchical classes and definitions; to aid clearer structure in crime management IS. We seek to answer the questions: should current law around identity fraud continue to be reinforced and measures introduced to prevent identity crime; should laws be amended; or should new identity crime laws be constructed? We conclude and recommend a solution incorporating elements of all three.

The illegal online use or trade in identities of individuals and organizations is recognized to have a substantial influence on other crimes such as frauds and money laundering; seriously impacting the real economy.1 The global economic cost of these identity crimes was estimated to be “US$2 trillion in 2005”.2 In the United States the annual estimated cost of identity crime alone in 2009 was “US$54 billion”.3 These survey figures may not reflect the actual figures if real cases were to be analysed.4 A major concern with the costing of identity crimes is the potential bias, error, and lack of consistency in how they are defined and classified.5 As crime management information systems (IS) transition from paper-based to digital systems to ease storage and aid retrieval (often remotely for law enforcement), there is an emergent need to classify the fields accurately.6 The US leads the way in criminalizing identity crime and data breaches.7 (IS) security research focuses on computer abuse, computer crime, and computer-related crimes. Computer crimes include “crimes whereby the computer is the target or the mechanism for committing the crime or the computer user is the target. It also includes crimes committed over the Internet or where the Internet plays a role in the commission of the crime” (see Table 6).8 Online identity crimes are linked to computer abuse, computer crime and computer-related crime in IS security, because they are enabled by computers and/or the Internet. A difference is that identity crime involves social engineering of people and technology. The ubiquity of information technology; computers, the Internet, mobile devices, and their interconnectedness in a digital economy enables the increase of identity crime methods, such as phishing, not previously accounted for by computer crime and abuse in IS research.9 Internet users reached the 2 billion mark in January 2011.10 Smart perpetrators are devising increasingly sophisticated ways of committing identity crimes. Therefore classes of IS-enabled abuse, such as identity crime, continue to evolve often ahead of IS security innovations.11 The remainder of this paper is structured as follows. The next section discusses the methodology.12 Then we identify the various definitions of identity crime and discuss our results. The final sections discuss the contributions, implications, limitations, conclusion and future research in this area.