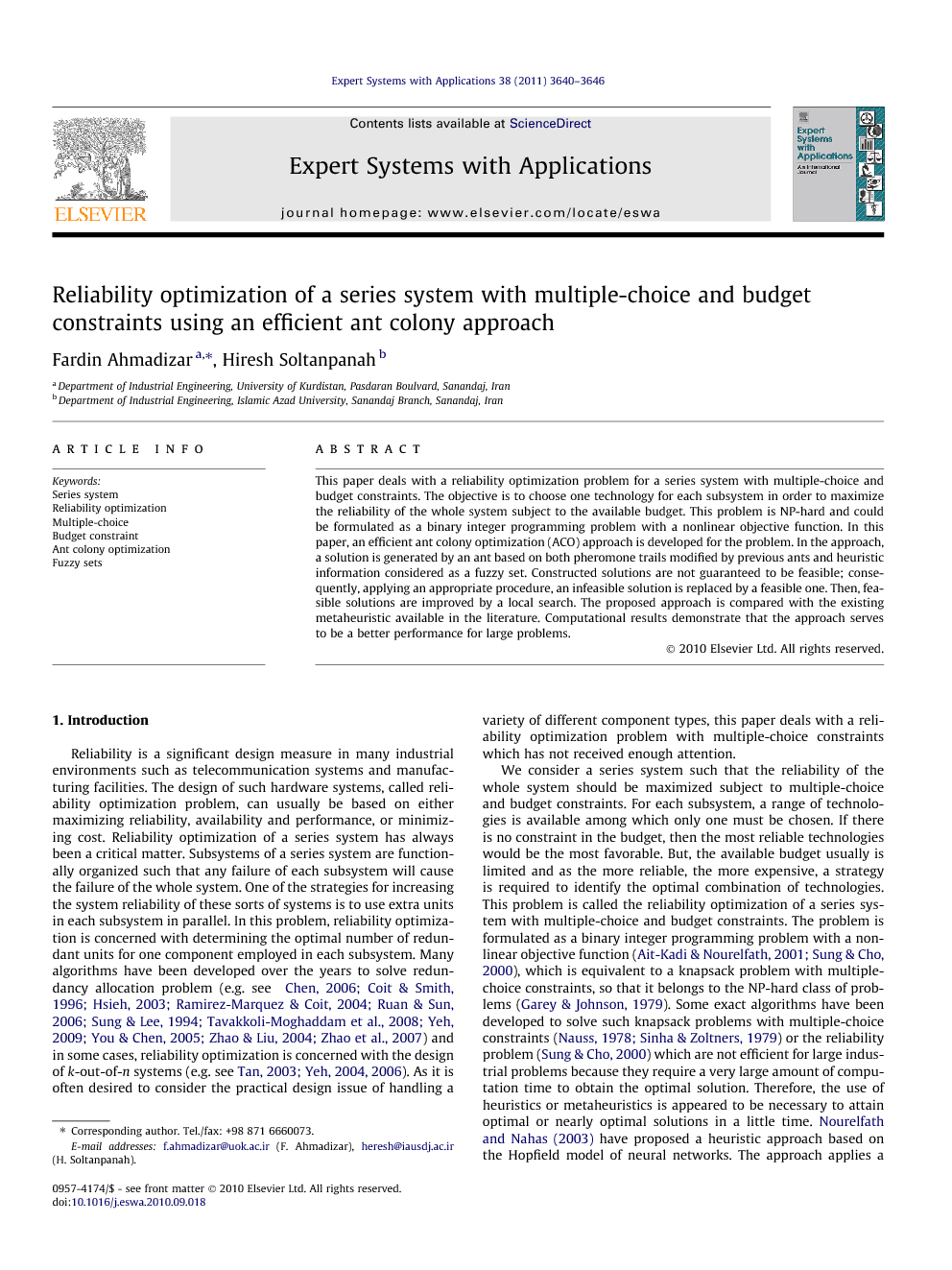 This paper deals with a reliability optimization problem for a series system with multiple-choice and budget constraints. The objective is to choose one technology for each subsystem in order to maximize the reliability of the whole system subject to the available budget. This problem is NP-hard and could be formulated as a binary integer programming problem with a nonlinear objective function. In this paper, an efficient ant colony optimization (ACO) approach is developed for the problem. In the approach, a solution is generated by an ant based on both pheromone trails modified by previous ants and heuristic information considered as a fuzzy set. Constructed solutions are not guaranteed to be feasible; consequently, applying an appropriate procedure, an infeasible solution is replaced by a feasible one. Then, feasible solutions are improved by a local search. The proposed approach is compared with the existing metaheuristic available in the literature. Computational results demonstrate that the approach serves to be a better performance for large problems.

Reliability is a significant design measure in many industrial environments such as telecommunication systems and manufacturing facilities. The design of such hardware systems, called reliability optimization problem, can usually be based on either maximizing reliability, availability and performance, or minimizing cost. Reliability optimization of a series system has always been a critical matter. Subsystems of a series system are functionally organized such that any failure of each subsystem will cause the failure of the whole system. One of the strategies for increasing the system reliability of these sorts of systems is to use extra units in each subsystem in parallel. In this problem, reliability optimization is concerned with determining the optimal number of redundant units for one component employed in each subsystem. Many algorithms have been developed over the years to solve redundancy allocation problem (e.g. see Chen, 2006, Coit and Smith, 1996, Hsieh, 2003, Ramirez-Marquez and Coit, 2004, Ruan and Sun, 2006, Sung and Lee, 1994, Tavakkoli-Moghaddam et al., 2008, Yeh, 2009, You and Chen, 2005, Zhao and Liu, 2004 and Zhao et al., 2007) and in some cases, reliability optimization is concerned with the design of k-out-of-n systems (e.g. see Tan, 2003, Yeh, 2004 and Yeh, 2006). As it is often desired to consider the practical design issue of handling a variety of different component types, this paper deals with a reliability optimization problem with multiple-choice constraints which has not received enough attention. We consider a series system such that the reliability of the whole system should be maximized subject to multiple-choice and budget constraints. For each subsystem, a range of technologies is available among which only one must be chosen. If there is no constraint in the budget, then the most reliable technologies would be the most favorable. But, the available budget usually is limited and as the more reliable, the more expensive, a strategy is required to identify the optimal combination of technologies. This problem is called the reliability optimization of a series system with multiple-choice and budget constraints. The problem is formulated as a binary integer programming problem with a nonlinear objective function (Ait-Kadi and Nourelfath, 2001 and Sung and Cho, 2000), which is equivalent to a knapsack problem with multiple-choice constraints, so that it belongs to the NP-hard class of problems (Garey & Johnson, 1979). Some exact algorithms have been developed to solve such knapsack problems with multiple-choice constraints (Nauss, 1978 and Sinha and Zoltners, 1979) or the reliability problem (Sung & Cho, 2000) which are not efficient for large industrial problems because they require a very large amount of computation time to obtain the optimal solution. Therefore, the use of heuristics or metaheuristics is appeared to be necessary to attain optimal or nearly optimal solutions in a little time. Nourelfath and Nahas (2003) have proposed a heuristic approach based on the Hopfield model of neural networks. The approach applies a new model of Hopfield networks, where neurons take quantized values rather than just binary or continuous values. This heuristic is quickly able to obtain optimal or nearly optimal solutions of small problems. The first modern metaheuristic (and the only one based on our knowledge) has been proposed by Nahas and Nourelfath (2005) to solve the problem. In this algorithm, which is an ant system, called AS, a penalty treated in the pheromone trails update is employed for infeasible solutions concerning to the budget constraint. The penalties are proportional to the amount of budget violations. Also, a local search is applied to improve constructed solutions. The AS approach is quickly able to obtain optimal or nearly optimal solutions of large problems. In this paper, we develop an efficient ant colony system, called ACS, for the problem. Ant colony optimization (ACO) (Dorigo, 1992, Dorigo et al., 1996 and Dorigo and Stutzle, 2003) is a metaheuristic developed for solving discrete optimization problems. An ACO algorithm is a population-based approach based on the behavior of real ant colonies using pheromones as a communication medium. Real ants are capable of finding the shortest path from their nest to a food source without using visual cues. In the ACS approach, a solution is generated by applying a pseudo-stochastic rule based on a combination of the previous solutions results and the knowledge related to the problem as two fuzzy sets. The unfeasibility of constructed solutions is removed by replacing an infeasible solution by a feasible one based on a neighborhood search procedure. Each solution is then improved by an interesting local search. A set of large problems is used for evaluating the proposed approach. The remainder of the paper is organized as follows. The next section gives the problem statement as a binary integer programming problem with a nonlinear objective function. The proposed ant colony approach is described in Section 3. Section 4 provides computational experiments and finally, concluding remarks are given in Section 5.

In this paper, an ant colony approach is presented for reliability optimization of a series system with multiple-choice and budget constraints. Each artificial ant constructs a solution by iteratively applying a pseudo-random transition rule based on both the heuristic information and the pheromone trails. The heuristic information is calculated based on an aggregation of two fuzzy sets. The generated solution may be infeasible; in other words, the total cost of the chosen technologies may be greater than the available budget. An infeasible solution is replaced by a feasible one using a neighborhood search procedure which randomly searches and finds a feasible solution with nearly highest reliability. The solution is then improved by an efficient local search method. Finally, the ant changes the pheromone intensity on each edge related to its chosen technologies using the local updating rule. Once all ants have built their solutions, the pheromone trails are globally modified in order to make the search more directed. To evaluate the performance of the developed approach, it has been compared with the only available algorithm. Our algorithm has effectively been able to obtain optimal or near optimal solutions for large problems. Computational experiments are given to show the superiority of the proposed ant colony approach.