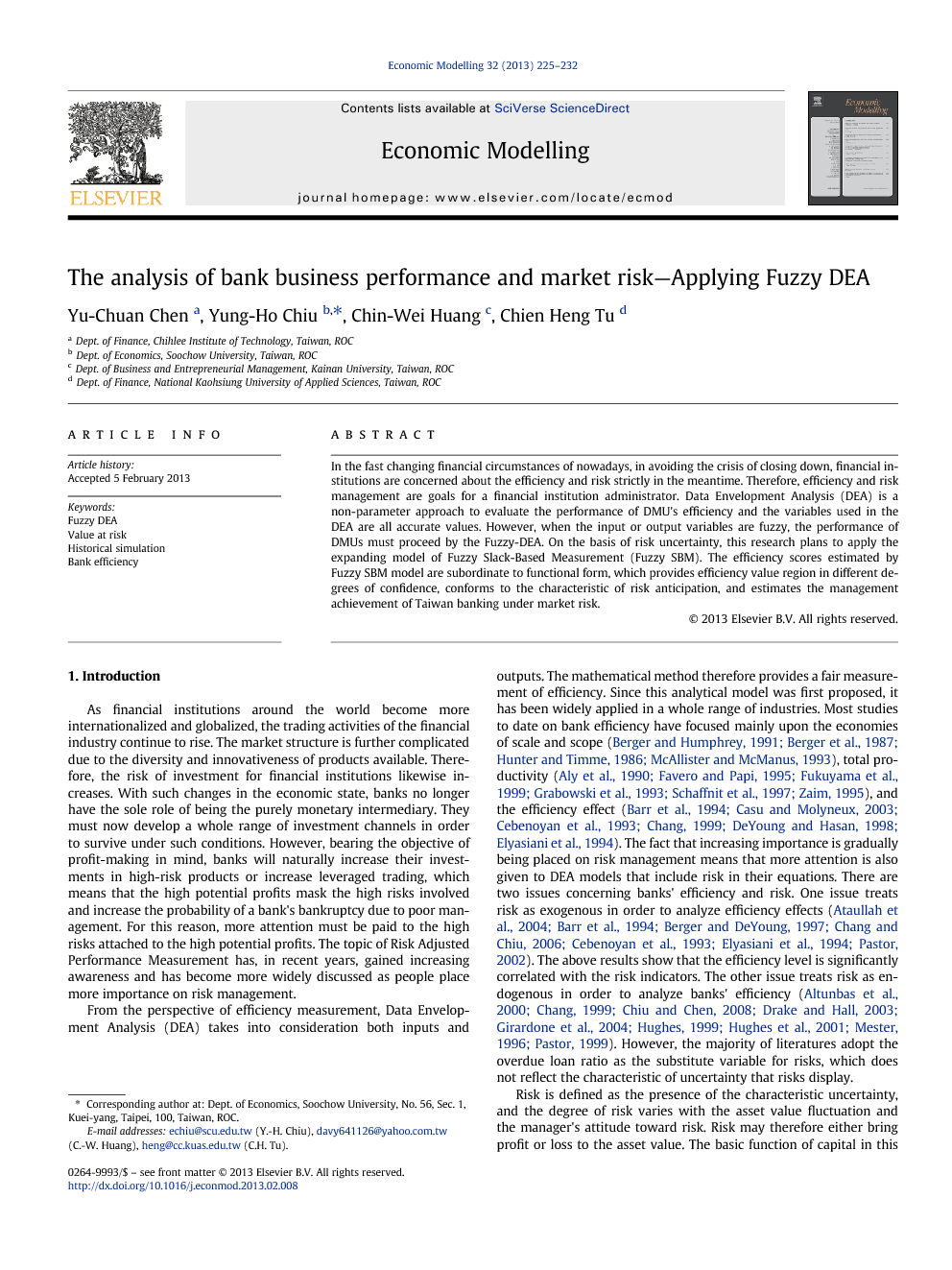 In the fast changing ﬁnancial circumstances of nowadays, in avoiding the crisis of closing down, ﬁnancial institutions are concerned about the efﬁciency and risk strictly in the meantime. Therefore, efﬁciency and risk management are goals for a ﬁnancial institution administrator. Data Envelopment Analysis (DEA) is a non-parameter approach to evaluate the performance of DMU's efﬁciency and the variables used in the DEA are all accurate values. However, when the input or output variables are fuzzy, the performance of DMUs must proceed by the Fuzzy-DEA. On the basis of risk uncertainty, this research plans to apply the expanding model of Fuzzy Slack-Based Measurement (Fuzzy SBM). The efﬁciency scores estimated by Fuzzy SBM model are subordinate to functional form, which provides efﬁciency value region in different degrees of conﬁdence, conforms to the characteristic of risk anticipation, and estimates the management achievement of Taiwan banking under market risk.

As ﬁnancial institutions around the world become more internationalized and globalized, the trading activities of the ﬁnancial industry continue to rise. The market structure is further complicated due to the diversity and innovativeness of products available. Therefore, the risk of investment for ﬁnancial institutions likewise increases. With such changes in the economic state, banks no longer have the sole role of being the purely monetary intermediary. They must now develop a whole range of investment channels in order to survive under such conditions. However, bearing the objective of proﬁt-making in mind, banks will naturally increase their investments in high-risk products or increase leveraged trading, which means that the high potential proﬁts mask the high risks involved and increase the probability of a bank's bankruptcy due to poor management. For this reason, more attention must be paid to the high risks attached to the high potential proﬁts. The topic of Risk Adjusted Performance Measurement has, in recent years, gained increasing awareness and has become more widely discussed as people place more importance on risk management. From the perspective of efﬁciency measurement, Data Envelopment Analysis (DEA) takes into consideration both inputs andoutputs. The mathematical method therefore provides a fair measurement of efﬁciency. Since this analytical model was ﬁrst proposed, it has been widely applied in a whole range of industries. Most studies to date on bank efﬁciency have focused mainly upon the economies of scale and scope (Berger and Humphrey, 1991; Berger et al., 1987; Hunter and Timme, 1986; McAllister and McManus, 1993), total productivity (Aly et al., 1990; Favero and Papi, 1995; Fukuyama et al., 1999; Grabowski et al., 1993; Schaffnit et al., 1997; Zaim, 1995), and the efﬁciency effect (Barr et al., 1994; Casu and Molyneux, 2003; Cebenoyan et al., 1993; Chang, 1999; DeYoung and Hasan, 1998; Elyasiani et al., 1994). The fact that increasing importance is gradually being placed on risk management means that more attention is also given to DEA models that include risk in their equations. There are two issues concerning banks' efﬁciency and risk. One issue treats risk as exogenous in order to analyze efﬁciency effects (Ataullah et al., 2004; Barr et al., 1994; Berger and DeYoung, 1997; Chang and Chiu, 2006; Cebenoyan et al., 1993; Elyasiani et al., 1994; Pastor, 2002). The above results show that the efﬁciency level is signiﬁcantly correlated with the risk indicators. The other issue treats risk as endogenous in order to analyze banks' efﬁciency (Altunbas et al., 2000; Chang, 1999; Chiu and Chen, 2008; Drake and Hall, 2003; Girardone et al., 2004; Hughes, 1999; Hughes et al., 2001; Mester, 1996; Pastor, 1999). However, the majority of literatures adopt the overdue loan ratio as the substitute variable for risks, which does not reﬂect the characteristic of uncertainty that risks display. Risk is deﬁned as the presence of the characteristic uncertainty, and the degree of risk varies with the asset value ﬂuctuation and the manager's attitude toward risk. Risk may therefore either bring proﬁt or loss to the asset value. The basic function of capital in thiscontext is to help bear the possible loss incurred by taking risks. The appropriate provision of capital is therefore key to a stable ﬁ- nancial structure, which can help prevent a situation of an inability to make payments. In 2002, the Basel Committee on Banking Supervision (BCBS) proposed the New Basel Capital Accord (Basel II), which sets out guidelines for international banks in terms of taking risks, and therefore, to prevent ﬁnancial crises. In the section on minimum capital requirement outlined in Basel II, the internal rating uses Value at Risk (VaR) as the basis to estimate the maximum potential loss of the portfolio selection. In simple terms, the VaR ‘uses a single value to represent the maximum potential loss of an investment portfolio during a period of time, with a certain conﬁdence level’. Hence, VaR is a prediction interval that provides different estimates according to the different conﬁdence intervals, and therefore takes into account the characteristic of uncertainty that risks displays. While VaR is widely used to represent the level of risks entailed, the input and output values of the original DEA models are considered crisp values. This is a reoccurring issue encountered when using VaR to estimate the efﬁciency values of banks. Considering both domestic and foreign literatures, there have been none that have combined these two issues and provided an analytical discussion on the topic. Therefore, this paper seeks to combine the Slack-Based Measure of Efﬁciency (SBM) as proposed by Tone (2001), with the Fuzzy Measure Theory, and develops the non-radial Fuzzy Slack-Based Measure of Efﬁciency model (Fuzzy-SBM).

With the increasing frequency of ﬁnancial disasters and its devastating impact over the recent years, countries around the world have begun to pay much more attention to ﬁnancial risk management. The fact that the ﬁnancial industry is the supporting structure to a country's economic. This researchﬁrstly derives models from the theories, using trigonometry as the basis to develop the Fuzzy-SBM model for the empirical study. Subsequently, banks in Taiwan were used as the sample for the study, with the research carrying out interval estimation of VaR values for use as the input variables. We then used the Fuzzy-SBM model to estimate the upper and lower bounds of the efﬁciency value for the banks, while varying the a-cut value to represent the effect of risk volatility on the efﬁciency value. Empirical results from the research show that: 1) The performance of most DMUs varies according to the risk factor. 2) The a-cut value affects the efﬁciency value, and therefore risk volatility affects the efﬁciency value. The higher volatility leads to a greater difference between the upper and lower bounds of the efﬁciency value, while conversely, no volatility in risk means that the efﬁciency value is ﬁxed. 3) For some DMUs, regardless of the a-cut value, their upper and lower bounds of efﬁciency value are equal, meaning that risk volatility does not affect their efﬁciency values and the risk variable does not affect their efﬁciencies. 4) The risk variable is a factor in the estimation of efﬁciency values and in the determination of the ranking of efﬁciencies. The Fuzzy-SBM model derived in this research paper uses trigonometry as the basis to estimate efﬁciency values as triangular membership functions. This model conforms to the characteristic of forecasting VaR and differs from traditional DEA models in that the results it produces can better demonstrate the implications of risk and the effects of risk on efﬁciency. The majority of literatures adopt the overdue loan ratio as the substitute variable for risks proxy variable, which does not reﬂect the characteristic of uncertainty that risks display (Altunbas et al., 2000; Chang, 1999; Chiu and Chen, 2008; Drake and Hall, 2003Girardone et al., 2004; Hughes, 1999; Hughes et al., 2001; Mester, 1996; Pastor, 1999). Thus, the main contribution of this article consists of the utilization of VaR as risk variables to reﬂect the features of riskﬂuctuation encountered by banks. Besides, in this article, the efﬁciency values calculated using the Fuzzy-SMB are membership functions, so theevaluated efﬁciency value is in fact an interval value with the function of anticipating the prospective efﬁciency performance. The results obtained differ from that calculated by traditional DEA models as a constant. Data Envelopment Analysis (DEA) is a non-parameter approach to evaluate the performance of DMU's efﬁciency and the variables used in DEA are all accurate values. However, when the input or output variables are fuzzy, the performance of DMUs must proceed by the Fuzzy-DEA. The limitations of this study consist in the risk assessment method suggested by Basel II. The method is able to produce the approximate estimations of the VaR of the banks in Taiwan; nevertheless, inﬂuenced by the limitations of incomplete data, this study simply can evaluate a part of the risk conditions. In addition, due to the different ﬁnancial environment in each nation and the great diversity of banks' investment deployment, the situations of Taiwanese banks may not reﬂect the actual ﬁnancial environment in other countries. This article, therefore, provides a more applicable DEA assessment method for reference.