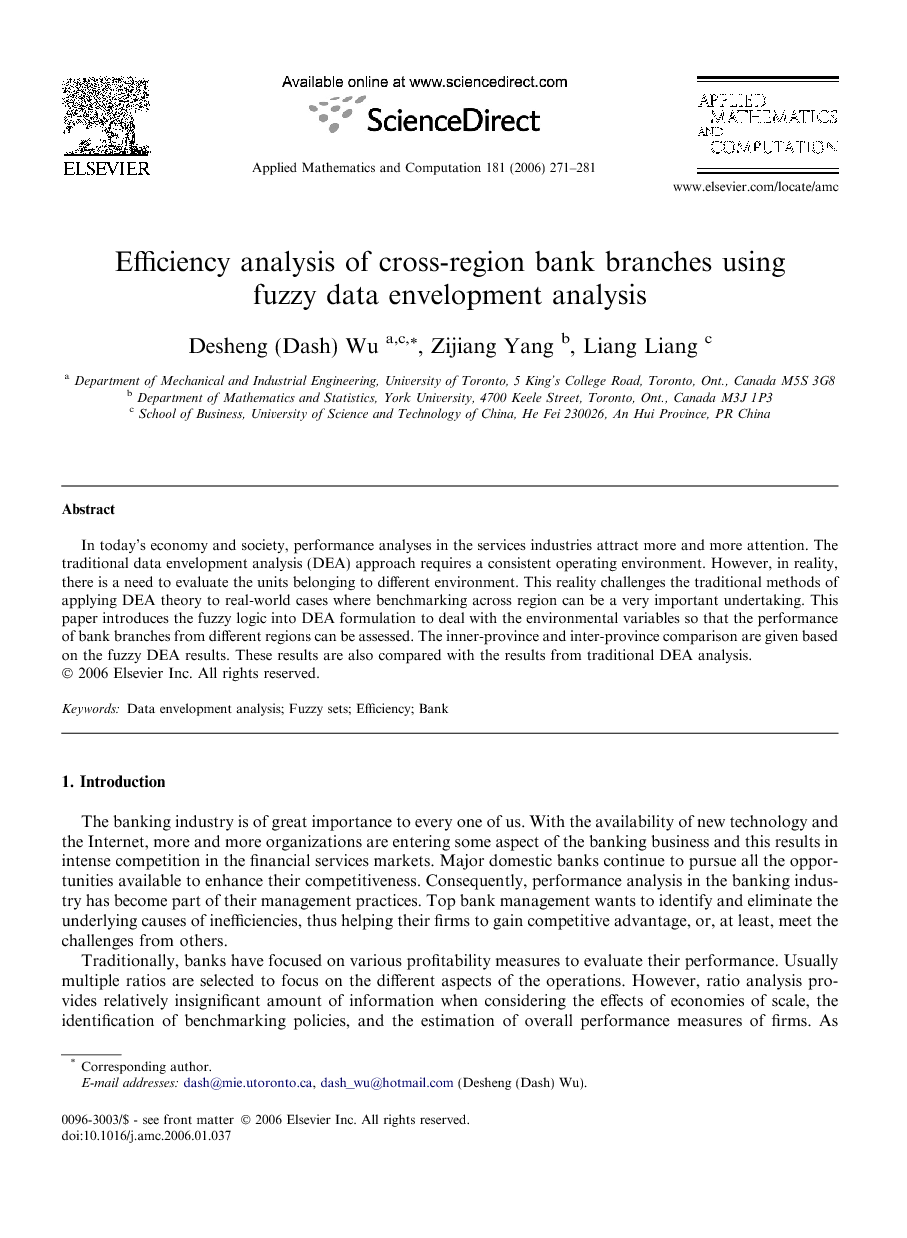 In today’s economy and society, performance analyses in the services industries attract more and more attention. The traditional data envelopment analysis (DEA) approach requires a consistent operating environment. However, in reality, there is a need to evaluate the units belonging to diﬀerent environment. This reality challenges the traditional methods of applying DEA theory to real-world cases where benchmarking across region can be a very important undertaking. This paper introduces the fuzzy logic into DEA formulation to deal with the environmental variables so that the performance of bank branches from diﬀerent regions can be assessed. The inner-province and inter-province comparison are given based on the fuzzy DEA results. These results are also compared with the results from traditional DEA analysis.

The banking industry is of great importance to every one of us. With the availability of new technology and the Internet, more and more organizations are entering some aspect of the banking business and this results in intense competition in the ﬁnancial services markets. Major domestic banks continue to pursue all the opportunities available to enhance their competitiveness. Consequently, performance analysis in the banking industry has become part of their management practices. Top bank management wants to identify and eliminate the underlying causes of ineﬃciencies, thus helping their ﬁrms to gain competitive advantage, or, at least, meet the challenges from others. Traditionally, banks have focused on various proﬁtability measures to evaluate their performance. Usually multiple ratios are selected to focus on the diﬀerent aspects of the operations. However, ratio analysis provides relatively insigniﬁcant amount of information when considering the eﬀects of economies of scale, the identiﬁcation of benchmarking policies, and the estimation of overall performance measures of ﬁrms. Asalternatives to traditional bank management tools, frontier eﬃciency analyses allow management to objectively identify best practices in complex operational environments. Five diﬀerent approaches, namely, data envelopment analysis (DEA) as[1–4] etc., free disposal hull (FDH) as in [5,6], stochastic frontier approach (SFA), also called econometric frontier approach (EFA) as in [7–9], thick frontier approach (TFA) as in [10–12], and distribution free approach (DFA) as in [13–15], have been reported in the literature as methods to evaluate bank eﬃciency. These approaches primarily diﬀer in how much restriction is imposed on the speciﬁcation of the best practice frontier and the assumption on random error and ineﬃciency. Compared to other approaches, DEA is a better way to organize and analyze data since it allows eﬃciency to change over time and requires no prior assumption on the speciﬁcation of the best practice frontier. Thus, DEA is a leading approach for the performance analysis in banking industry in literature. However, the traditional DEA analysis requires a consistent infrastructure and operating environment in which the entities, appropriately called decision making units (DMUs), operate. In reality there is a need to compare DMUs where some units may have a diﬀerent environment which the others cannot adopt; hence, the comparisons are not always fair. This reality challenges the traditional methods of applying DEA theory to real-world cases. Banker and Morey [16] introduced categorical inputs and outputs and their development rests on the assumption that there is a natural nesting or hierarchy of categories. The same authors [17] had also dealt with the relative technical and scale eﬃciencies of decision making units when some of the inputs or outputs are exogenously ﬁxed and beyond the discretionary control of the DMU managers. Cooper et al. [18] introduced a method to do the cross-system comparison. They make use of mixed integer LP (linear programming) problem with binary variables to evaluate DMUs in diﬀerent systems. The proposed mixed integer LP is solved by an algorithm where the units of one subsystem are evaluated relative to frontier based on the other subsystem. This is related to the super-eﬃciency proposed by Andersen and Petersen [19]. Similar to the hurdle of super-eﬃciency DEA, the infeasible problem often occurs when using BCC model to do cross-system comparison. As a result, the treatment oﬀered by Cooper et al.’s cannot be applied if we need to estimate the production frontier using a variable returns to scale (VRS) technology and separate the scale eﬀect from productivity changes [20]. Furthermore, Lozano-Vivas et al. [21] incorporate the environmental variables directly into the ‘‘basic’’ DEA model since adding variables to the DEA model raises the eﬃciency scores. Their method of adding each environmental factor guarantees that only the eﬃciency scores of DMUs with bad environmental conditions can change. This approach has a pre-requisite: they must know in advance the type of inﬂuence of each environmental variable on the eﬃciency scores. In other words, each uncontrolled factor must have an inﬂuence of know orientation. This paper introduces the fuzzy logic into DEA formulation to deal with the environmental variables so that the performance of bank branches from diﬀerent regions can be assessed. This approach can deal with both quantitative and qualitative or linguistic environmental variables. In our formulation the environmental variables serve as linking measures across diﬀerent subsystems so that cross-region comparison can be done. To deal with evaluation among diﬀerent systems, our methodology provides an alternative to build BCC model, which is a hurdle of Cooper et al. [18]. Our proposed fuzzy models are based upon the formulations of Lertworasirikul et al. [22]. However, it diﬀers from theirs by incorporating both crisp and fuzzy variables in the models. Our fuzzy CCR model shows the powerful discriminating power, which is the main concern in Lertworasirikul et al. [22]. The rest of the paper is organized as follows. Section 2 presents the fuzzy data envelopment analysis (DEA) as well as the conceptual models. Section 3 gives the fuzzy DEA results and further discussion. Finally, our conclusions and future work are presented in Section 4.

The main objective of this paper is to apply the fuzzy DEA models to deal with the environmental variables so that the cross-region comparison is possible. In our formulation the environmental variables serve as linking measures across diﬀerent subsystems in order to perform a cross-region comparison. To deal with evaluation among diﬀerent systems, our methodology provides an alternative to build BCC model, which is a hurdle of previous work by Cooper et al. [18]. Although our proposed fuzzy models are built upon the formulations of Lertworasirikul et al. [22], it diﬀers by incorporating both crisp and fuzzy variables in the models. Our fuzzy CCR model shows the powerful discriminating power, the main concern in [22]. Further consideration could be done by incorporating DEA and data mining techniques