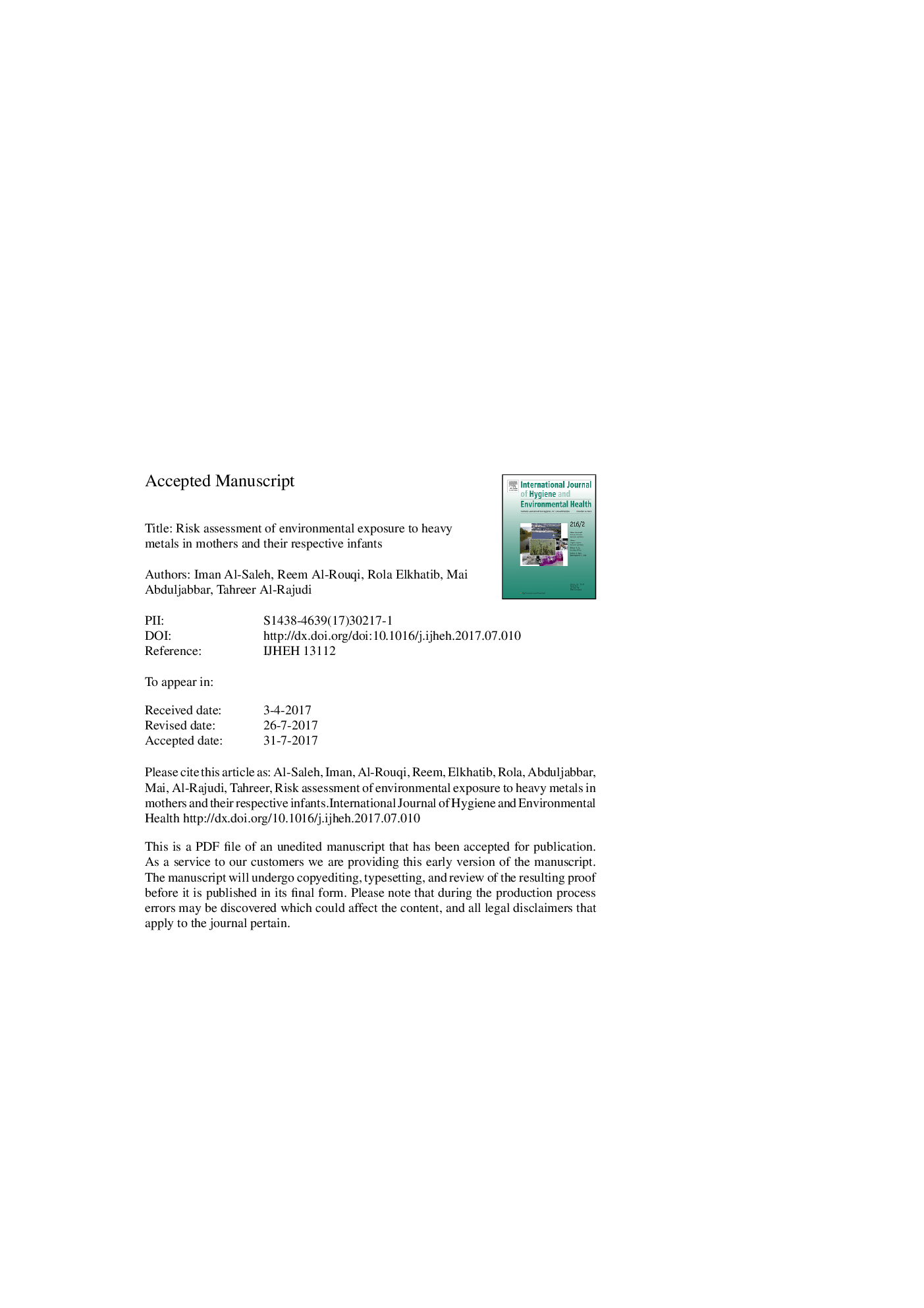 Exposure to heavy metals can cause renal injury, which has been well documented in occupational exposure. Studies of low exposure in the general population, however, are still scarce, particularly for vulnerable populations such as mothers and young children. This study evaluated exposure to heavy metals, and biomarkers of renal function and oxidative stress in 944 lactating mothers and their infants and investigated the role of the interaction between heavy metals and oxidative stress in altering renal function. Mother and infant urine samples were analyzed to measure mercury (Hg), cadmium (Cd), and lead (Pb) concentrations for determining body-burden exposure; N-acetyl-Î²-d-glucosaminidase (NAG), Î±1-microglobulin (Î±1-MG), albumin (ALB), and creatinine (Cr) concentrations for determining early renal injury; and 8-hydroxy-2-deoxyguanosine (8-OHdG) and malondialdehyde (MDA) concentrations for determining oxidative stress. The median concentrclearlyations in mothers presented as Î¼g/g Cr (infants as Î¼g/l) for Hg, Cd, and Pb were 0.695 (0.716), 0.322 (0.343), and 3.97 (5.306) respectively. The mothers and their infants had clearly been exposed to heavy metals and had levels higher than the reference values reported for the general populations of USA, Germany, and Canada. Multiple regression analyses clearly demonstrated associations between urinary heavy metals in quartiles and several renal and oxidative biomarkers in mothers and to a lesser extent their infants. Ã coefficients for urinary excretions of MDA, 8-OHdG, ALB, Î±1-MG, NAG, and Cr in mothers were high in the highest quartile of Hg (1.183â51.29Â Î¼g/g Cr or 1.732â106.95Â Î¼g/l), Cd (0.565â765.776Â Î¼g/g Cr or 0.785â1347.0Â Î¼g/l), and Pb (6.606â83.937Â Î¼g/g Cr or 9.459â80.826Â Î¼g/l), except Pb was not associated with ALB. Infants in the highest Pb quartile (9.293â263.098Â Î¼g/l) had the highest Ã coefficients of urinary excretion of MDA, 8-OHdG, ALB, NAG, and Cr. Significant increasing trend in biomarkers across the quartiles of the three metals was seen in both mothers and infants (p trend <0.001). A receiver operating characteristic analysis supported the predictive abilities of the four renal biomarkers in discriminating between low versus high metal quartiles. The interaction between heavy metals and oxidative stress contributed to the high excretions of renal biomarkers, but the mechanism remains unclear. These findings add to the limited evidence that low exposure to heavy metals in the general population is associated with alterations in renal function that could eventually progress to renal damage if exposure continues and that children are more susceptible due to the immaturity of their body organs.