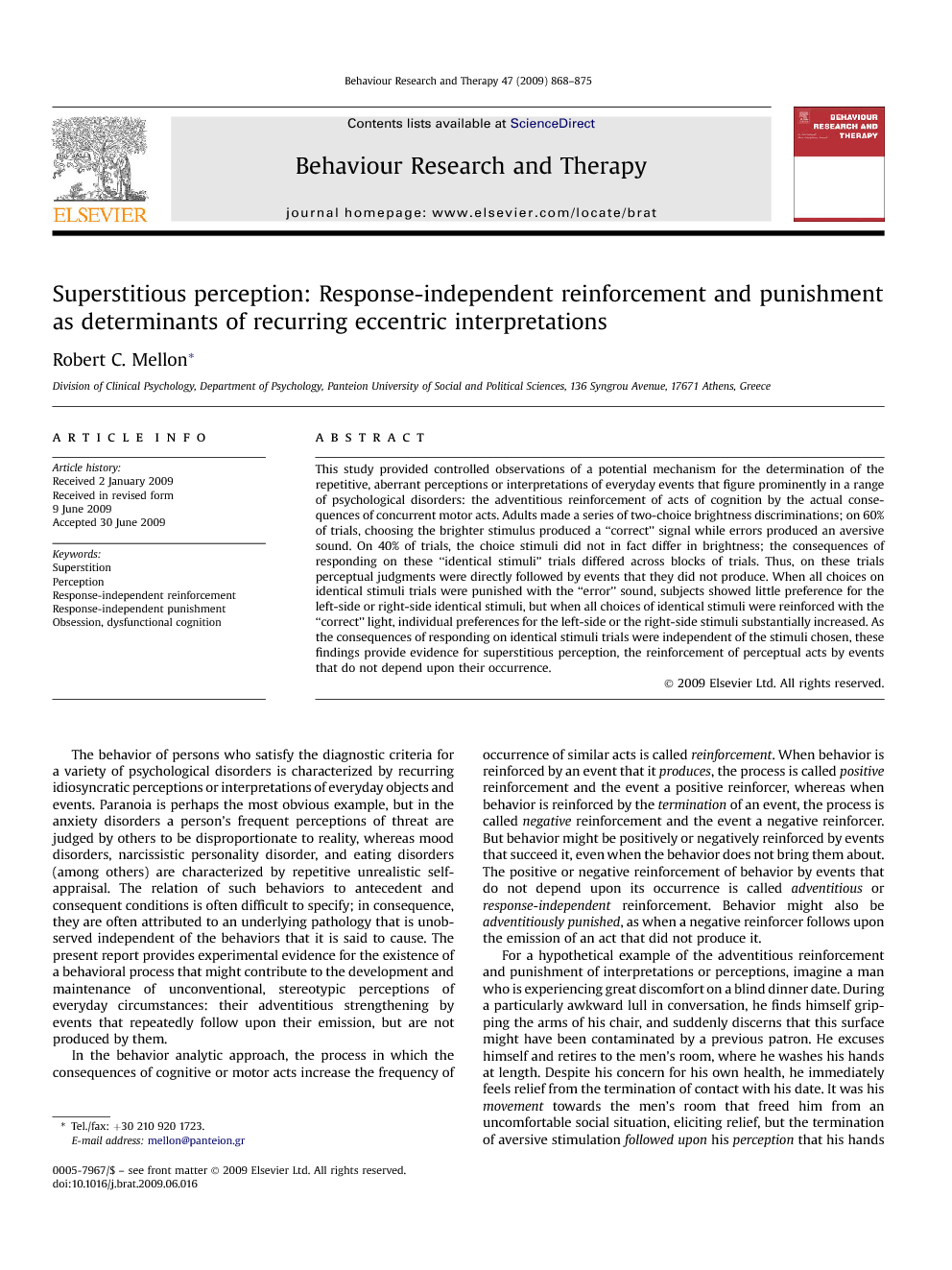 This study provided controlled observations of a potential mechanism for the determination of the repetitive, aberrant perceptions or interpretations of everyday events that figure prominently in a range of psychological disorders: the adventitious reinforcement of acts of cognition by the actual consequences of concurrent motor acts. Adults made a series of two-choice brightness discriminations; on 60% of trials, choosing the brighter stimulus produced a “correct” signal while errors produced an aversive sound. On 40% of trials, the choice stimuli did not in fact differ in brightness; the consequences of responding on these “identical stimuli” trials differed across blocks of trials. Thus, on these trials perceptual judgments were directly followed by events that they did not produce. When all choices on identical stimuli trials were punished with the “error” sound, subjects showed little preference for the left-side or right-side identical stimuli, but when all choices of identical stimuli were reinforced with the “correct” light, individual preferences for the left-side or the right-side stimuli substantially increased. As the consequences of responding on identical stimuli trials were independent of the stimuli chosen, these findings provide evidence for superstitious perception, the reinforcement of perceptual acts by events that do not depend upon their occurrence.

Assessment of awareness of experimental conditions Two subjects indicated in the first open-ended question of the post-exposure interview that they believed that there were many instances in which the choice stimuli did not differ in intensity; their data were excluded from the analyses that follow. Of the remaining subjects, no mention was made of suspicions that stimuli were not discriminable on open-ended questions concerning their experiences and their understanding of the purpose of the experiment; in contrast, 77% of the subjects spontaneously related changes in their emotions over the course of the experiment. When asked directly whether it had occurred to them on any that the intensities of choice stimuli might not be discriminable, eight of the 88 remaining subjects responded affirmatively; of these, two indicated that this impression occurred on one occasion, four indicated that it occurred two or three times, and two indicated that it occurred about five times (note that the choice stimuli were actually identical on 60 occasions over the course of the experiment). In contrast, when asked directly, all 88 subjects provided some form of observation of changes in their emotions over the course of the experiment. No subject spontaneously reported responding on the left or right-side more often; when asked directly, 11 of 88 subjects reported a difference, ranging from five to 15 occasions. On the first open-ended question, eight of 22 subjects exposed to the series reinforcement-reinforcement-punishment and six of 22 subjects exposed to the series mixed-reinforcement-punishment spontaneously reported that near the end of the experiment, they repeatedly received the “error” sound despite the fact that they had responded correctly.