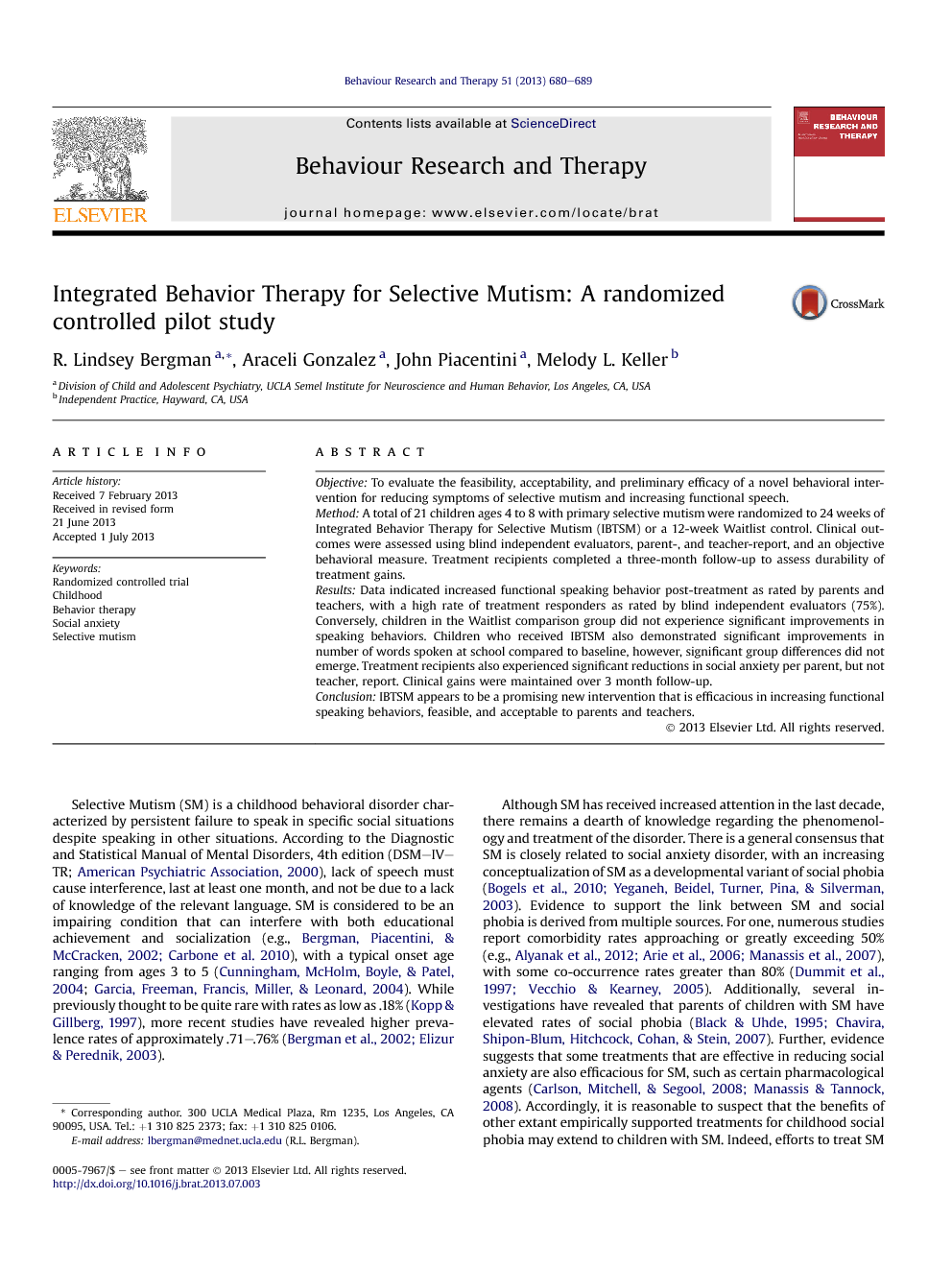 Method A total of 21 children ages 4 to 8 with primary selective mutism were randomized to 24 weeks of Integrated Behavior Therapy for Selective Mutism (IBTSM) or a 12-week Waitlist control. Clinical outcomes were assessed using blind independent evaluators, parent-, and teacher-report, and an objective behavioral measure. Treatment recipients completed a three-month follow-up to assess durability of treatment gains. Results Data indicated increased functional speaking behavior post-treatment as rated by parents and teachers, with a high rate of treatment responders as rated by blind independent evaluators (75%). Conversely, children in the Waitlist comparison group did not experience significant improvements in speaking behaviors. Children who received IBTSM also demonstrated significant improvements in number of words spoken at school compared to baseline, however, significant group differences did not emerge. Treatment recipients also experienced significant reductions in social anxiety per parent, but not teacher, report. Clinical gains were maintained over 3 month follow-up. Conclusion IBTSM appears to be a promising new intervention that is efficacious in increasing functional speaking behaviors, feasible, and acceptable to parents and teachers.

Selective Mutism (SM) is a childhood behavioral disorder characterized by persistent failure to speak in specific social situations despite speaking in other situations. According to the Diagnostic and Statistical Manual of Mental Disorders, 4th edition (DSM–IV–TR; American Psychiatric Association, 2000), lack of speech must cause interference, last at least one month, and not be due to a lack of knowledge of the relevant language. SM is considered to be an impairing condition that can interfere with both educational achievement and socialization (e.g., Bergman et al., 2002 and Carbone et al., 2010), with a typical onset age ranging from ages 3 to 5 (Cunningham, McHolm, Boyle, & Patel, 2004; Garcia, Freeman, Francis, Miller, & Leonard, 2004). While previously thought to be quite rare with rates as low as .18% (Kopp & Gillberg, 1997), more recent studies have revealed higher prevalence rates of approximately .71–.76% (Bergman et al., 2002 and Elizur and Perednik, 2003). Although SM has received increased attention in the last decade, there remains a dearth of knowledge regarding the phenomenology and treatment of the disorder. There is a general consensus that SM is closely related to social anxiety disorder, with an increasing conceptualization of SM as a developmental variant of social phobia (Bogels et al., 2010 and Yeganeh et al., 2003). Evidence to support the link between SM and social phobia is derived from multiple sources. For one, numerous studies report comorbidity rates approaching or greatly exceeding 50% (e.g., Alyanak et al., 2012, Arie et al., 2006 and Manassis et al., 2007), with some co-occurrence rates greater than 80% (Dummit et al., 1997 and Vecchio and Kearney, 2005). Additionally, several investigations have revealed that parents of children with SM have elevated rates of social phobia (Black and Uhde, 1995 and Chavira et al., 2007). Further, evidence suggests that some treatments that are effective in reducing social anxiety are also efficacious for SM, such as certain pharmacological agents (Carlson et al., 2008 and Manassis and Tannock, 2008). Accordingly, it is reasonable to suspect that the benefits of other extant empirically supported treatments for childhood social phobia may extend to children with SM. Indeed, efforts to treat SM using modified manualized interventions initially developed for social anxiety (Fisak, Oliveros, & Ehrenreich, 2006) or more general forms of child anxiety (Hudson, Krain, & Kendall, 2001) have been somewhat successful. Similarly, modular CBT, which has shown promise as treatment for anxiety disorder in children, was used successfully to treat SM as reported in two recent case studies (Christon et al., 2012 and Reuther et al., 2011). SM presents unique challenges that must be addressed during treatment. Unfortunately, these critical aspects of treatment are not present in existing manualized child anxiety interventions or are, at best, tacked on as supplemental additions. Children with SM often fail to speak to the therapist in early sessions, which necessitates unique strategies for engagement and parental involvement early in the treatment process. Further, the typical age of onset for SM (age 5; Cunningham et al., 2004; Garcia et al., 2004) is considerably younger than those of other anxiety disorders, requiring developmental adaptations of commonly used CBT intervention (see Piacentini & Bergman, 2001). In addition, children with SM tend to be most symptomatic in the school environment (Bergman, Keller, Piacentini, & Bergman, 2008), thus requiring extensive treatment involvement of and coordination with school personnel, most notably, the child's teacher. As a result, current treatment approaches shown effective for childhood social phobia and other childhood anxiety disorders may not be sufficient for the treatment of SM. With the exception of a small medication trial (Black & Uhde, 1994), there are no published randomized controlled treatment trials for children with SM to date. In fact, until quite recently, what little treatment research that did exist lacked scientific rigor (e.g., no comparison group, single subjects) among other methodological limitations (e.g., failure to identify diagnostic procedures, assessment or outcome methods, number of treatment sessions, or details of the treatment method; Viana et al., 2009 and Cohan et al., 2006). These shortcomings, along with the lack of controlled trials, make it difficult to assess treatment efficacy or to replicate described treatments. Despite these limitations, recent reviews of the literature indicate empirical support for individual behavioral intervention of SM (Cohan et al., 2006 and Stone et al., 2002), and recent more methodologically sound studies using behavioral techniques show promising results (e.g., Oerbeck et al., 2012, Sharkey et al., 2008 and Vecchio and Kearney, 2009). The goals of the present study were to examine the feasibility, tolerability, and preliminary efficacy of a behavioral intervention developed for selective mutism using a randomized controlled methodology. Following a baseline assessment to determine eligibility, participants were randomly assigned to either 20 sessions of individual Integrated Behavior Therapy for Selective Mutism (IBTSM) or 12 weeks of waitlist (WL). We hypothesized that the active treatment condition would be feasible, tolerable, and associated with statistically significant decreases in symptoms compared to WL condition. To assess durability of gains, children randomized to IBTSM completed a follow-up assessment 3 months post-treatment. We anticipated that symptom improvement would be maintained over the follow-up period.

Prior to analyses, data were screened to test statistical assumptions (e.g., normality). Standardized z-scores on all continuous data were examined, and a criterion of z ≥ ± 3.0 was used to identify outliers. One child had a z-score of z = 4.56 on the SNAP at baseline and was therefore not included in analyses of the SNAP. Simple between-group comparisons were conducted using χ2 tests for categorical measures and t-tests for continuous measures. Treatment effects were analyzed using 2 (Group: IBTSM vs. WL) × 2 (Time: Baseline vs. End of Condition) mixed factorial ANOVAs. End of Condition data points corresponded to week 12 (post-waitlist) for children in the WL group and Week 24 (post-treatment) for children in the IBTSM group. If significant main effects and interactions were found, only interaction effects are interpreted. For significant Group × Time interactions, post hoc within-subjects ANOVAs were performed in order to compare scores from baseline to the end of condition (treatment or WL). In addition to End of Condition analyses, treatment response at week 12 (end of condition for WL group and mid-treatment for IBTSM group) was explored in order to provide time-matched group comparisons and to assess whether children receiving IBTSM made significant mid-treatment gains. Finally, t-tests were performed to explore outcomes at week 36 (3-month follow-up) compared to baseline and week 24 (End of Condition) for children randomized to the IBTSM condition. Due to the preliminary nature of our investigation, no corrections were made for multiple comparisons.