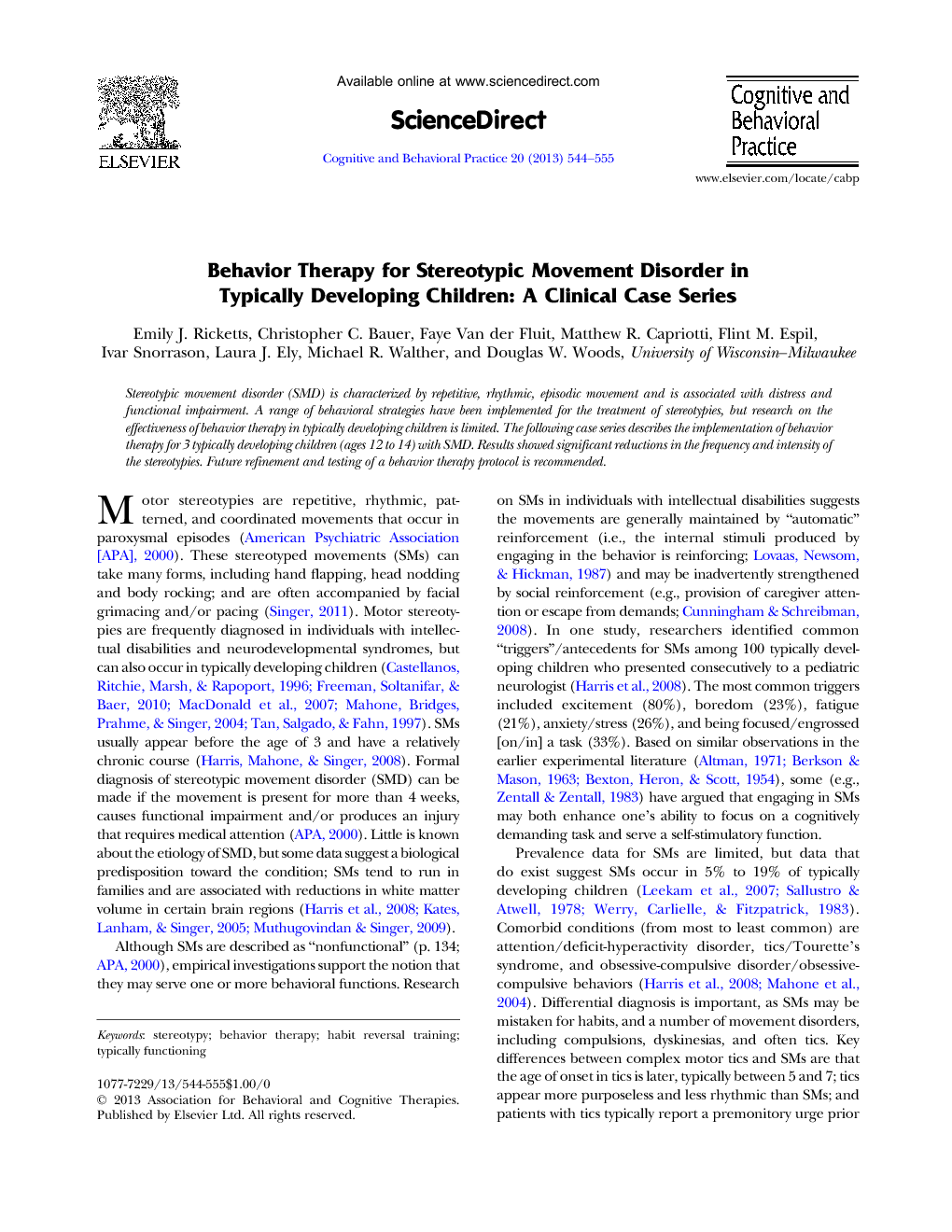 Stereotypic movement disorder (SMD) is characterized by repetitive, rhythmic, episodic movement and is associated with distress and functional impairment. A range of behavioral strategies have been implemented for the treatment of stereotypies, but research on the effectiveness of behavior therapy in typically developing children is limited. The following case series describes the implementation of behavior therapy for 3 typically developing children (ages 12 to 14) with SMD. Results showed significant reductions in the frequency and intensity of the stereotypies. Future refinement and testing of a behavior therapy protocol is recommended.

Motor stereotypies are repetitive, rhythmic, patterned, and coordinated movements that occur in paroxysmal episodes (American Psychiatric Association [APA], 2000). These stereotyped movements (SMs) can take many forms, including hand flapping, head nodding and body rocking; and are often accompanied by facial grimacing and/or pacing (Singer, 2011). Motor stereotypies are frequently diagnosed in individuals with intellectual disabilities and neurodevelopmental syndromes, but can also occur in typically developing children (Castellanos et al., 1996, Freeman et al., 2010, MacDonald et al., 2007, Mahone et al., 2004 and Tan et al., 1997). SMs usually appear before the age of 3 and have a relatively chronic course (Harris, Mahone, & Singer, 2008). Formal diagnosis of stereotypic movement disorder (SMD) can be made if the movement is present for more than 4 weeks, causes functional impairment and/or produces an injury that requires medical attention (APA, 2000). Little is known about the etiology of SMD, but some data suggest a biological predisposition toward the condition; SMs tend to run in families and are associated with reductions in white matter volume in certain brain regions (Harris et al., 2008, Kates et al., 2005 and Muthugovindan and Singer, 2009). Although SMs are described as “nonfunctional” (p. 134; APA, 2000), empirical investigations support the notion that they may serve one or more behavioral functions. Research on SMs in individuals with intellectual disabilities suggests the movements are generally maintained by “automatic” reinforcement (i.e., the internal stimuli produced by engaging in the behavior is reinforcing; Lovaas, Newsom, & Hickman, 1987) and may be inadvertently strengthened by social reinforcement (e.g., provision of caregiver attention or escape from demands; Cunningham & Schreibman, 2008). In one study, researchers identified common “triggers”/antecedents for SMs among 100 typically developing children who presented consecutively to a pediatric neurologist (Harris et al., 2008). The most common triggers included excitement (80%), boredom (23%), fatigue (21%), anxiety/stress (26%), and being focused/engrossed [on/in] a task (33%). Based on similar observations in the earlier experimental literature (Altman, 1971, Berkson and Mason, 1963 and Bexton et al., 1954), some (e.g., Zentall & Zentall, 1983) have argued that engaging in SMs may both enhance one’s ability to focus on a cognitively demanding task and serve a self-stimulatory function. Prevalence data for SMs are limited, but data that do exist suggest SMs occur in 5% to 19% of typically developing children (Leekam et al., 2007, Sallustro and Atwell, 1978 and Werry et al., 1983). Comorbid conditions (from most to least common) are attention/deficit-hyperactivity disorder, tics/Tourette’s syndrome, and obsessive-compulsive disorder/obsessive-compulsive behaviors (Harris et al., 2008 and Mahone et al., 2004). Differential diagnosis is important, as SMs may be mistaken for habits, and a number of movement disorders, including compulsions, dyskinesias, and often tics. Key differences between complex motor tics and SMs are that the age of onset in tics is later, typically between 5 and 7; tics appear more purposeless and less rhythmic than SMs; and patients with tics typically report a premonitory urge prior to tic occurrence, whereas those with SMs do not. Also, tics occur more randomly and are experienced as more bothersome than are SMs (Mahone et al.; Muthugovindan and Singer, 2009 and Singer, 2011). Nevertheless, few seek treatment for SMs, and reasons for this are unclear. One possible explanation is that many children with non-self-injurious SMs do not experience significant impairment or distress as a result of the behavior, although evidence does suggest that SMs can lead to bullying by peers and significant concern by parents (Barry, Baird, Lascelles, Bunton, & Hedderly, 2011). In situations where treatment is warranted, options are limited. Pharmacotherapy is not often considered for pediatric patients with non-self-injurious SMs, as the costs (e.g., side effects) are generally perceived to outweigh the benefits (Barry et al., 2011), and literature on the efficacy of nonpharmacological (primarily behavioral) treatments is scarce.