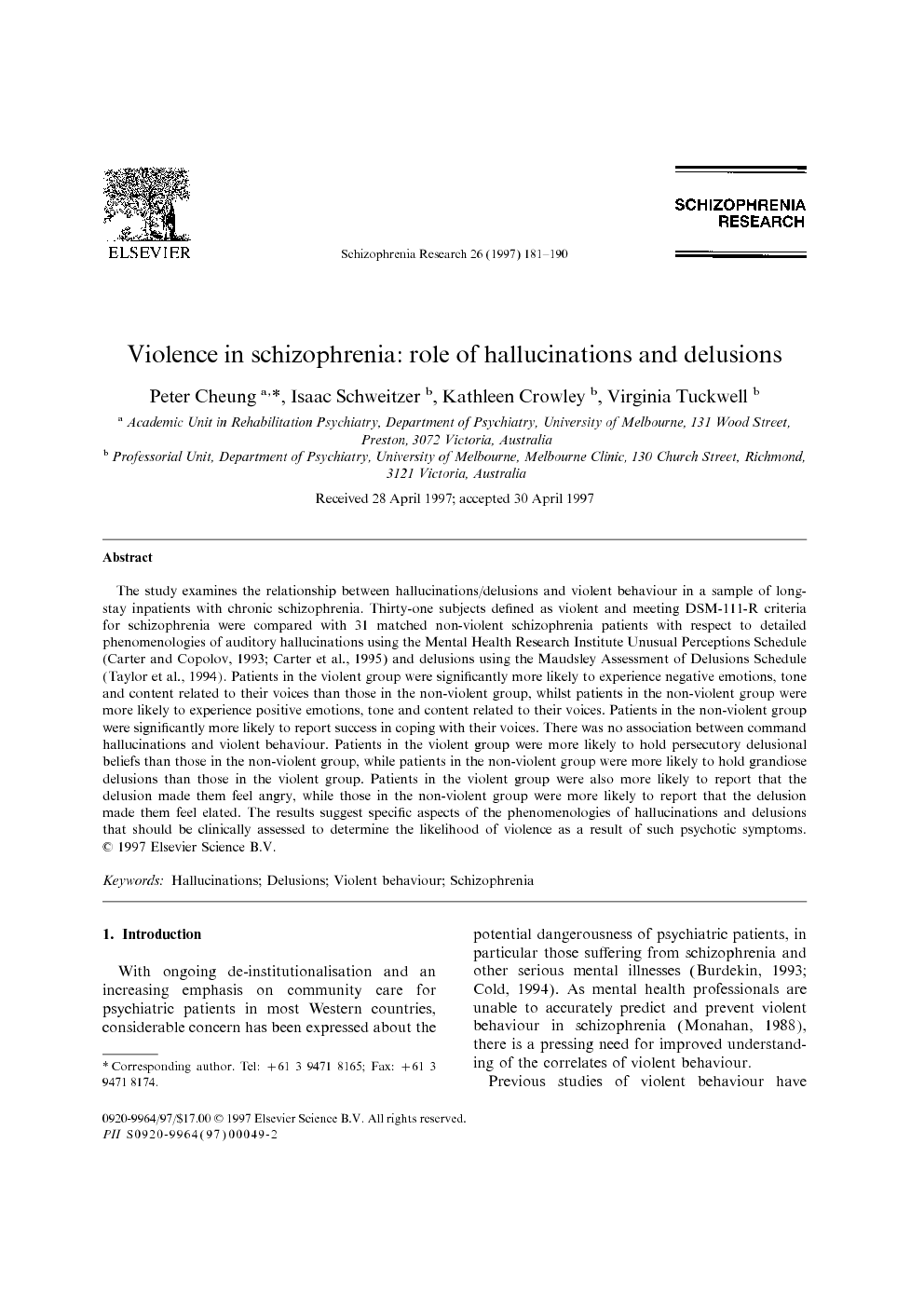 With ongoing de-institutionalisation and an increasing emphasis on community care for psychiatric patients in most Western countries, considerable concern has been expressed about the potential dangerousness of psychiatric patients, in particular those suffering from schizophrenia and other serious mental illnesses (Burdekin, 1993; Cold, 1994). As mental health professionals are unable to accurately predict and prevent violent behaviour in schizophrenia (Monahan, 1988), there is a pressing need for improved understanding of the correlates of violent behaviour. Previous studies of violent behaviour have focused on psychopathology, in particular the role of positive symptomatology (Krakowski et al., 1986), but findings have been inconsistent. For instance, Tardiff and Sweillam (1982)found violent behaviour among psychiatric inpatients to be associated with delusions, hallucinations, inappropriate affect and bizarre behaviour. However, Kay et al. (1988)found that positive symptoms did not discriminate between violent and non-violent groups. The relationship between violent behaviour and hallucinations has been studied virtually exclusively in relation to command hallucinations. It is unclear how frequently command hallucinations are obeyed or result in violent behaviour (Rogers et al., 1988). Goodwin et al. (1971)found that subjects who experienced command hallucinations mostly ignored them and none had committed dangerous or destructive acts in response to them. Falloon and Talbot (1981)followed up community psychiatric patients with chronic auditory hallucinations, and found that even though they often accepted their guidance, violence towards others did not appear to be an issue. Thompson et al. (1992)found no correlation between command hallucinations and violent crime among mentally ill offenders acquitted on grounds of not guilty by reason of insanity. Hellerstein et al. (1987)reported that assaultiveness of patients with command hallucinations was not significantly different from patients without command hallucinations. Zisook et al. (1995)found that a group of schizophrenia outpatients who had command hallucinations did not have a history of more violent or impulsive acts than a matched group without command hallucinations. McNeil (1994)stated that studies of hallucinating patients failed to demonstrate a clear relationship between assaultive behaviour and whether or not the hallucinations involved commands. However, Yesavage (1983)claimed that command hallucinations were correlated with dangerous acts, but the evidence supporting this conclusion was not reported. Rogers et al. (1988)found that forensic patients (75% schizophrenia) with command hallucinations had more aggressive and self-punishment themes in the content of their hallucinations; 44% of patients reported that they frequently responded to hallucinatory commands with unquestioning obedience. Junginger, 1990 and Junginger, 1996found, based on their self reports, that psychiatric patients (61.3% schizophrenia) who experienced command hallucinations were at risk for dangerous behaviour, and reported compliance with more dangerous commands was not uncommon. Mullen et al. (1993)stated there was growing evidence that patients were both more subject to command hallucinations and more prone to act on them than first thought; dangerous acting, though probably less likely than harmless acting, was still a risk. Little has been written on phenomenological correlates of delusions associated with violent behaviour. Certain delusions, including persecutory delusions, delusions of misidentification (Silva et al., 1993; De Pauw and Szulecka, 1988), delusions of jealousy (Movat, 1966), and the White House Case, i.e. schizophrenia patients with persecutory delusions involving a prominent political figure (Shore et al., 1988), have been reported to be associated with an increased risk of violence. However, these were either case reports or case series of patients who have been arrested for violent crimes. Hafner and Boker (1973)found a correlation between the degree of systematisation of a delusional belief and the likelihood of it being acted upon in a violent manner. Hafner and Boker (1982)compared murderers suffering from schizophrenia with a control sample of hospital admissions, and found that the murderers were more likely to be deluded, to have a structured delusional system, and to have delusions of love and infidelity. Taylor (1985)found, using structured interviews, that delusions were the most common motive behind the violent offences of psychotic subjects. There was an association between delusions of passivity and violence behaviour. Mullen et al. (1993)also stated that very little attempt had been made to study the effect of delusions on patients in terms of the distress or pre-occupation they engendered. Taylor et al. (1994)reviewed the literature and concluded that a clear relationship between delusions and violence could be established. However, the authors stated that the characteristics of delusions associated with violence were unknown, and that reliable and valid measures of the characteristics of delusional beliefs could be important in risk assessment among psychotic patients. Our understanding of the relationship between violent behaviour and hallucinations/delusions is limited by the methodology of most previous studies, such as retrospective review of case records, the absence of standardised measures for evaluating such symptoms, and the lack of availability of instruments to measure aggression. The standardised instruments which were employed were limited mostly to the use of symptom scales, such as the Brief Psychiatric Rating Scale, which did not allow for a detailed analysis of the phenomenologies of hallucinations/delusions. Wessely et al. (1993)and Buchanan et al. (1993)used the Maudsley Assessment of Delusions Schedule (Taylor et al., 1994) to study the detailed phenomenologies of delusions, but their study was on delusional action in general and not specifically on aggressive behaviour. The present study was designed to address the methodological limitations of previous studies. Our aim was to perform a detailed phenomenological study of the hallucinations and delusions associated with violent behaviour in schizophrenia. We hypothesised that violent and non-violent patients with schizophrenia could be distinguished by certain phenomenological aspects of these symptoms. In particular, we predicted that violent patients were more likely to experience command hallucinations, and they were more likely to experience negative emotions generated by hallucinations/delusions than non-violent patients.