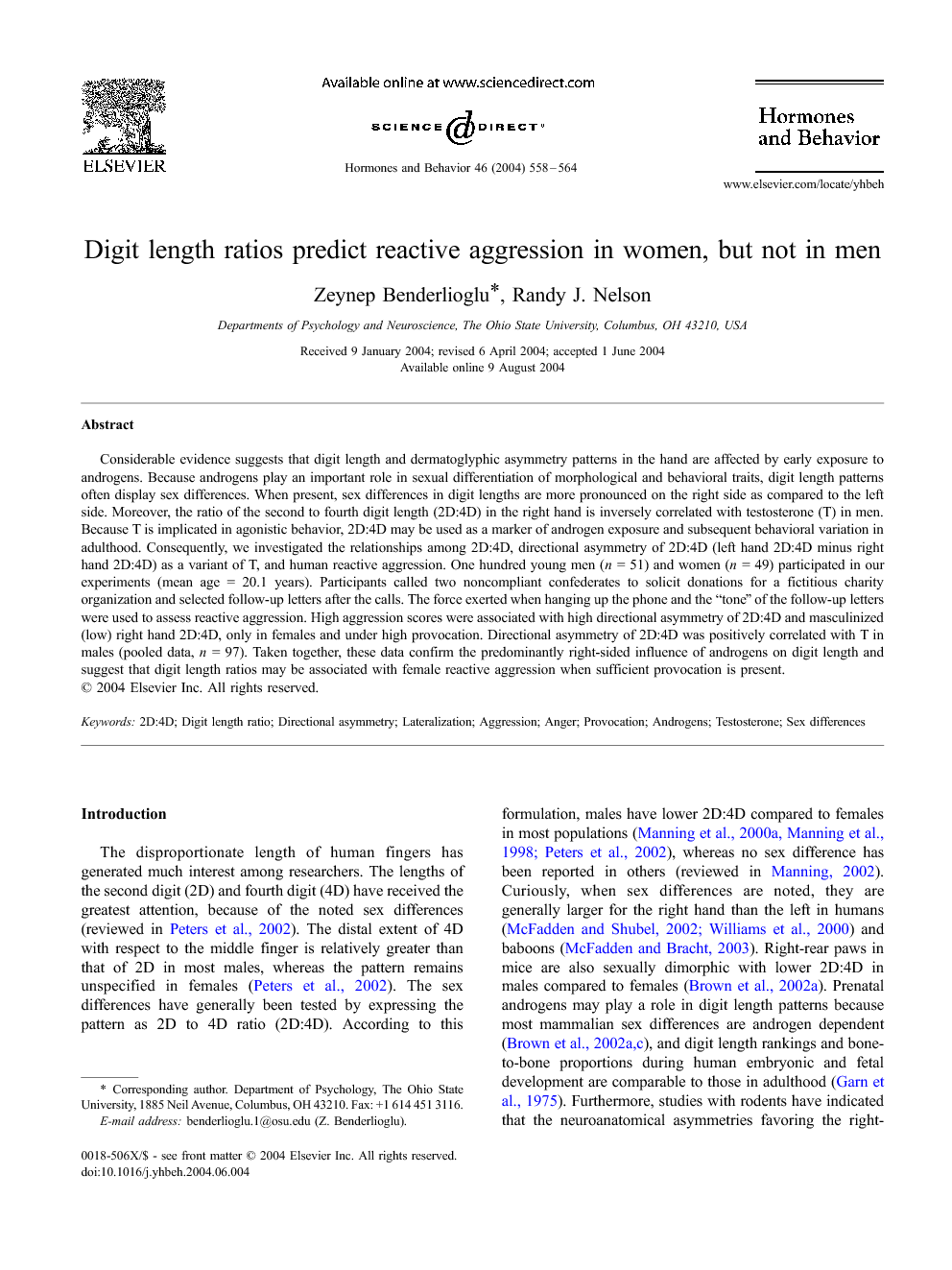 Considerable evidence suggests that digit length and dermatoglyphic asymmetry patterns in the hand are affected by early exposure to androgens. Because androgens play an important role in sexual differentiation of morphological and behavioral traits, digit length patterns often display sex differences. When present, sex differences in digit lengths are more pronounced on the right side as compared to the left side. Moreover, the ratio of the second to fourth digit length (2D:4D) in the right hand is inversely correlated with testosterone (T) in men. Because T is implicated in agonistic behavior, 2D:4D may be used as a marker of androgen exposure and subsequent behavioral variation in adulthood. Consequently, we investigated the relationships among 2D:4D, directional asymmetry of 2D:4D (left hand 2D:4D minus right hand 2D:4D) as a variant of T, and human reactive aggression. One hundred young men (n = 51) and women (n = 49) participated in our experiments (mean age = 20.1 years). Participants called two noncompliant confederates to solicit donations for a fictitious charity organization and selected follow-up letters after the calls. The force exerted when hanging up the phone and the “tone” of the follow-up letters were used to assess reactive aggression. High aggression scores were associated with high directional asymmetry of 2D:4D and masculinized (low) right hand 2D:4D, only in females and under high provocation. Directional asymmetry of 2D:4D was positively correlated with T in males (pooled data, n = 97). Taken together, these data confirm the predominantly right-sided influence of androgens on digit length and suggest that digit length ratios may be associated with female reactive aggression when sufficient provocation is present.

The disproportionate length of human fingers has generated much interest among researchers. The lengths of the second digit (2D) and fourth digit (4D) have received the greatest attention, because of the noted sex differences (reviewed in Peters et al., 2002). The distal extent of 4D with respect to the middle finger is relatively greater than that of 2D in most males, whereas the pattern remains unspecified in females (Peters et al., 2002). The sex differences have generally been tested by expressing the pattern as 2D to 4D ratio (2D:4D). According to this formulation, males have lower 2D:4D compared to females in most populations (Manning et al., 2000a,Manning et al., 1998; Peters et al., 2002), whereas no sex difference has been reported in others (reviewed in Manning, 2002). Curiously, when sex differences are noted, they are generally larger for the right hand than the left in humans (McFadden and Shubel, 2002 and Williams et al., 2000) and baboons (McFadden and Bracht, 2003). Right-rear paws in mice are also sexually dimorphic with lower 2D:4D in males compared to females (Brown et al., 2002a). Prenatal androgens may play a role in digit length patterns because most mammalian sex differences are androgen dependent (Brown et al., 2002a and Brown et al., 2002c), and digit length rankings and bone-to-bone proportions during human embryonic and fetal development are comparable to those in adulthood (Garn et al., 1975). Furthermore, studies with rodents have indicated that the neuroanatomical asymmetries favoring the right-hand side are generally observed in males and can be largely attributed to the action of the sex steroid hormone, testosterone (T) (reviewed in Wisniewski, 1998). The timing of 2D:4D differentiation, presumably as a result of androgen exposure, remains inconclusive. In one study, adult T was negatively correlated with 2D:4D in the right hand (cf. Manning et al., 1998), suggesting that T can have activational effects on the 2D:4D relationship. A variety of behaviors that are either sexually dimorphic or ascribed to the actions of sex steroids also correlate with 2D:4D (reviewed in Manning, 2002). For example, significant associations have been reported between 2D:4D and sexual orientation and/or preference (Brown et al., 2002b, Lippa, 2003, Rahman and Wilson, 2003, Robinson and Manning, 2000 and Williams et al., 2000), lateralization of hand performance (Manning et al., 2000b), and autism (Manning et al., 2001). Furthermore, low (masculinized) 2D:4D is linked to hyperactivity in girls (Williams et al., 2003), spatial navigation skills (Csatho et al., 2001), sensation seeking, and lack of inhibitions in adult women (Austin et al., 2002). Aggressive behavior is relevant to 2D:4D research, because it is sexually dimorphic. In a variety of species, including humans, males are typically more overtly aggressive than females (van Goozen et al., 1995). Sex differences in agonistic behavior are largely attributed to the actions of sex steroids, especially those of T. To our knowledge, however, no previous studies have reported any associations between 2D:4D and aggression. Accordingly, we examined the relationship between digit length ratio and human reactive aggression. Reactive aggression was operationally defined as an angry-like response to frustration (goal blocking), provocation, or threat (Berkowitz, 1989). We hypothesized that low 2D:4D, especially in the right hand would be positively correlated with aggression. Lateralization of 2D:4D was also tested through its association with adult T. Specifically, we predicted an asymmetrical influence of adult T concentrations on the right and left hand digit ratios as previously suggested (Brown et al., 2002a and Brown et al., 2002b), as well as a significant association between lateralization of 2D:4D and aggression.