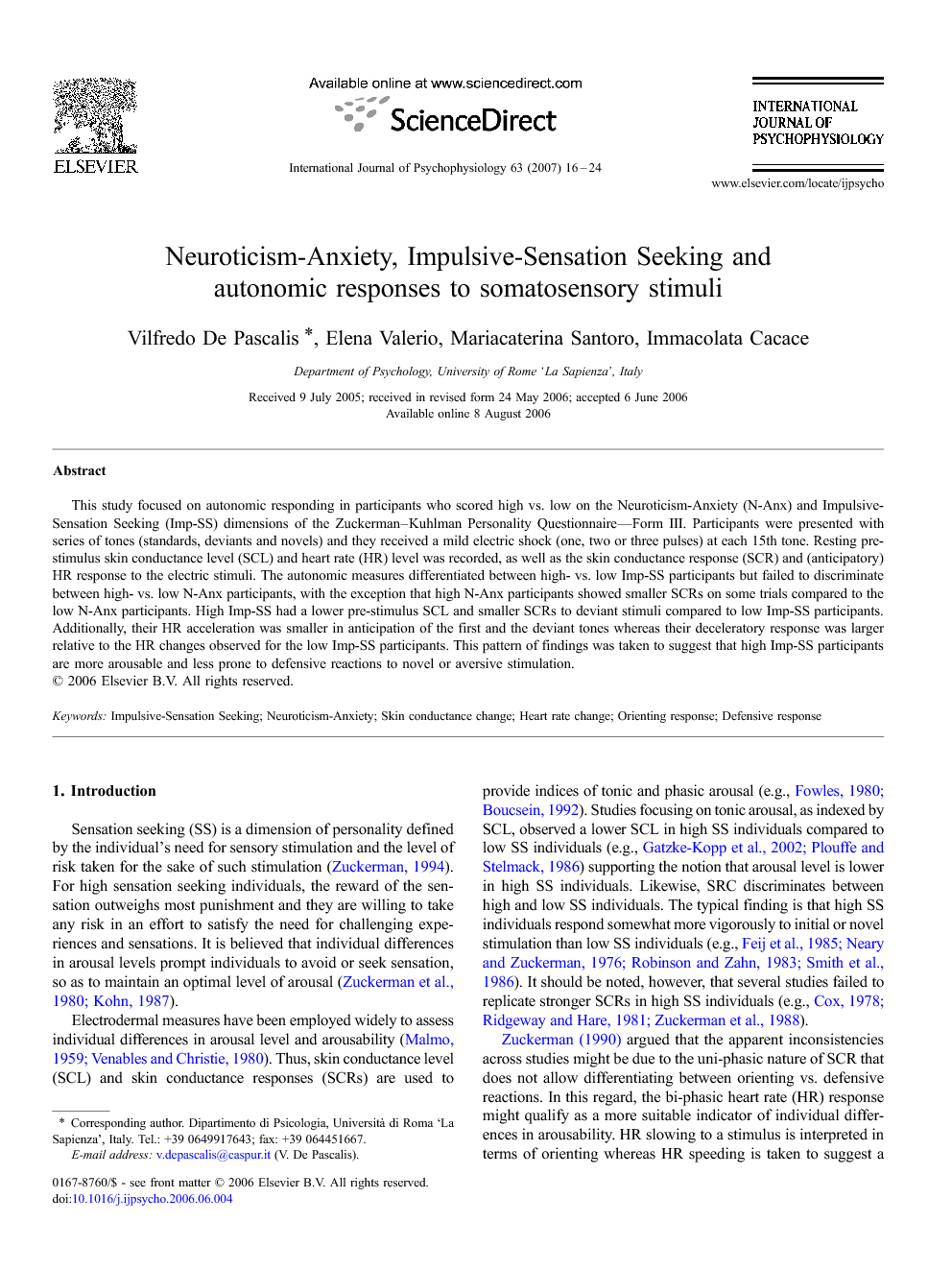 This study focused on autonomic responding in participants who scored high vs. low on the Neuroticism-Anxiety (N-Anx) and Impulsive-Sensation Seeking (Imp-SS) dimensions of the Zuckerman–Kuhlman Personality Questionnaire—Form III. Participants were presented with series of tones (standards, deviants and novels) and they received a mild electric shock (one, two or three pulses) at each 15th tone. Resting pre-stimulus skin conductance level (SCL) and heart rate (HR) level was recorded, as well as the skin conductance response (SCR) and (anticipatory) HR response to the electric stimuli. The autonomic measures differentiated between high- vs. low Imp-SS participants but failed to discriminate between high- vs. low N-Anx participants, with the exception that high N-Anx participants showed smaller SCRs on some trials compared to the low N-Anx participants. High Imp-SS had a lower pre-stimulus SCL and smaller SCRs to deviant stimuli compared to low Imp-SS participants. Additionally, their HR acceleration was smaller in anticipation of the first and the deviant tones whereas their deceleratory response was larger relative to the HR changes observed for the low Imp-SS participants. This pattern of findings was taken to suggest that high Imp-SS participants are more arousable and less prone to defensive reactions to novel or aversive stimulation.

Sensation seeking (SS) is a dimension of personality defined by the individual's need for sensory stimulation and the level of risk taken for the sake of such stimulation (Zuckerman, 1994). For high sensation seeking individuals, the reward of the sensation outweighs most punishment and they are willing to take any risk in an effort to satisfy the need for challenging experiences and sensations. It is believed that individual differences in arousal levels prompt individuals to avoid or seek sensation, so as to maintain an optimal level of arousal (Zuckerman et al., 1980 and Kohn, 1987). Electrodermal measures have been employed widely to assess individual differences in arousal level and arousability (Malmo, 1959 and Venables and Christie, 1980). Thus, skin conductance level (SCL) and skin conductance responses (SCRs) are used to provide indices of tonic and phasic arousal (e.g., Fowles, 1980 and Boucsein, 1992). Studies focusing on tonic arousal, as indexed by SCL, observed a lower SCL in high SS individuals compared to low SS individuals (e.g., Gatzke-Kopp et al., 2002 and Plouffe and Stelmack, 1986) supporting the notion that arousal level is lower in high SS individuals. Likewise, SRC discriminates between high and low SS individuals. The typical finding is that high SS individuals respond somewhat more vigorously to initial or novel stimulation than low SS individuals (e.g., Feij et al., 1985, Neary and Zuckerman, 1976, Robinson and Zahn, 1983 and Smith et al., 1986). It should be noted, however, that several studies failed to replicate stronger SCRs in high SS individuals (e.g., Cox, 1978, Ridgeway and Hare, 1981 and Zuckerman et al., 1988). Zuckerman (1990) argued that the apparent inconsistencies across studies might be due to the uni-phasic nature of SCR that does not allow differentiating between orienting vs. defensive reactions. In this regard, the bi-phasic heart rate (HR) response might qualify as a more suitable indicator of individual differences in arousability. HR slowing to a stimulus is interpreted in terms of orienting whereas HR speeding is taken to suggest a defensive reaction (e.g., Graham, 1979; see review in Turpin, 1986). Likewise, anticipatory HR slowing is suggestive of stimulus intake whereas HR speeding preceding the stimulus is associated with the rejection of external input (e.g., Lacey and Lacey, 1974; see review in van der Molen et al., 1985). Several studies showed that when low-SS individuals respond to intensive stimulation by speeding their HR (indexing a defensive reaction) a slowing of HR (indexing orienting) is seen in high SS individuals (e.g., Orlebecke and Feij, 1979, Ridgeway and Hare, 1981 and Robinson and Zahn, 1983). Looking at anticipatory HR responses, Somsen et al. (1983) observed that HR slowing was much more pronounced when participants expected the delivery of an aversive event (shock threat). This finding suggests that anticipatory HR slowing reflects the focus of attention to external input (see also Van der Molen et al., 1996). The goal of the present study was to assess individual differences in SS by using both electrodermal and cardiac indices of arousal level and arousability, and by looking at both anticipatory changes and stimulus-induced responses. Individual differences in SS were examined in the context of the ‘five-factor’ model developed by Zuckerman and colleagues that is used widely in psychophysiological studies of personality (Zuckerman et al., 1988, Zuckerman et al., 1991 and Zuckerman et al., 1993). The five factors distinguished in the Zuckerman model are Sociability (Sy), Neuroticism-Anxiety (NA), Impulsive Sensation Seeking (Imp-SS), Aggression-Hostility (Agg-Host) and Activity (Act). The primary focus in the current study was on Imp-SS and on NA, as the latter factor may interact with Imp-SS in modulating autonomic responsivity. Electrodermal activity and HR were recorded when participants, high vs. low Imp-SS and high vs. low Anx, were counting tones and receiving, occasionally, a mild electric shock. It was anticipated that high Imp-SS participants would show reduced SCRs and HR slowing to novel or aversive stimulation whereas low Imp-SS participants were expected to show pronounced SRCs and reduced HR slowing or even HR speeding.