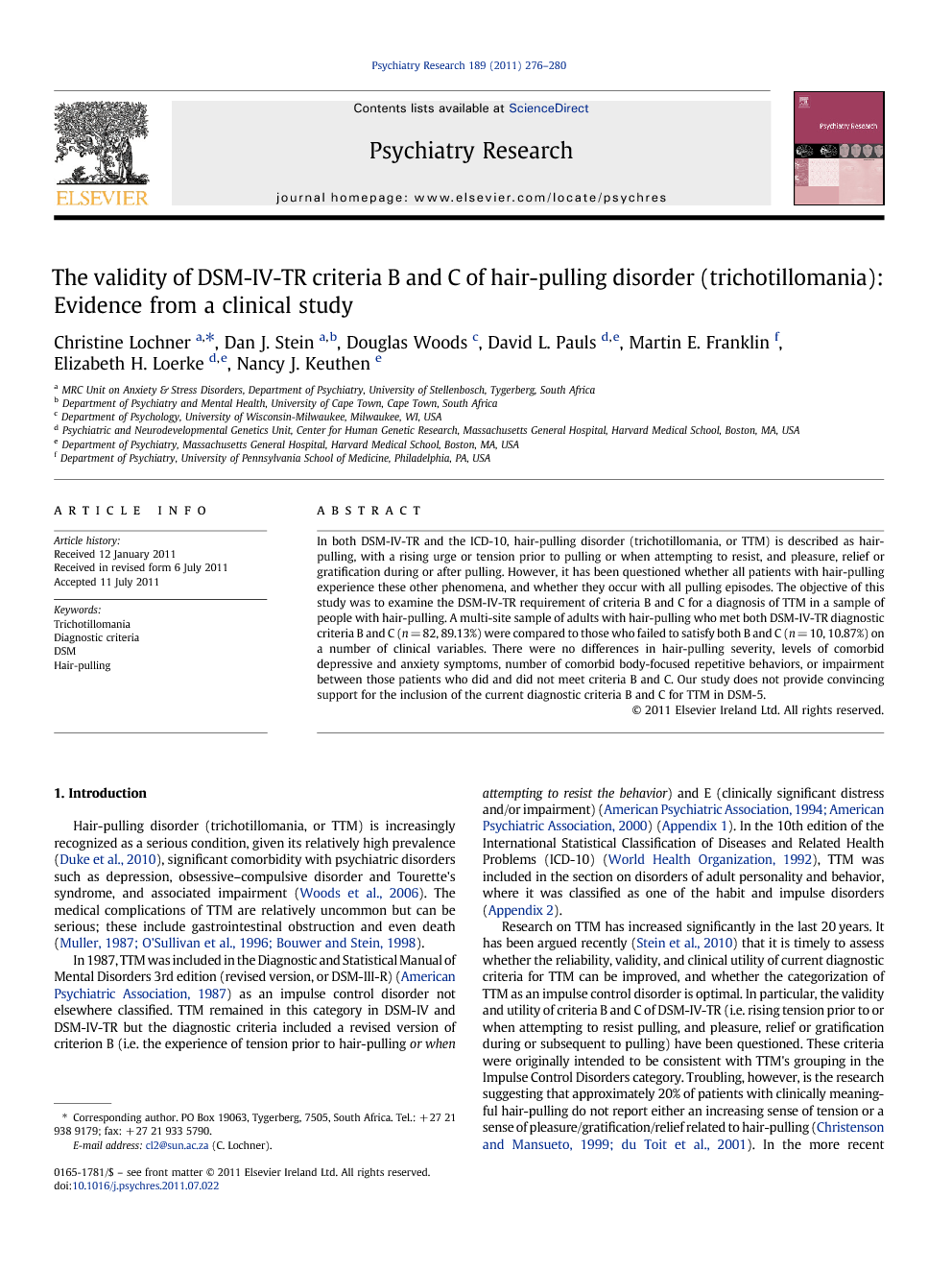 In both DSM-IV-TR and the ICD-10, hair-pulling disorder (trichotillomania, or TTM) is described as hair-pulling, with a rising urge or tension prior to pulling or when attempting to resist, and pleasure, relief or gratification during or after pulling. However, it has been questioned whether all patients with hair-pulling experience these other phenomena, and whether they occur with all pulling episodes. The objective of this study was to examine the DSM-IV-TR requirement of criteria B and C for a diagnosis of TTM in a sample of people with hair-pulling. A multi-site sample of adults with hair-pulling who met both DSM-IV-TR diagnostic criteria B and C (n = 82, 89.13%) were compared to those who failed to satisfy both B and C (n = 10, 10.87%) on a number of clinical variables. There were no differences in hair-pulling severity, levels of comorbid depressive and anxiety symptoms, number of comorbid body-focused repetitive behaviors, or impairment between those patients who did and did not meet criteria B and C. Our study does not provide convincing support for the inclusion of the current diagnostic criteria B and C for TTM in DSM-5.

Hair-pulling disorder (trichotillomania, or TTM) is increasingly recognized as a serious condition, given its relatively high prevalence (Duke et al., 2010), significant comorbidity with psychiatric disorders such as depression, obsessive–compulsive disorder and Tourette's syndrome, and associated impairment (Woods et al., 2006). The medical complications of TTM are relatively uncommon but can be serious; these include gastrointestinal obstruction and even death (Muller, 1987, O'Sullivan et al., 1996 and Bouwer and Stein, 1998). In 1987, TTM was included in the Diagnostic and Statistical Manual of Mental Disorders 3rd edition (revised version, or DSM-III-R) (American Psychiatric Association, 1987) as an impulse control disorder not elsewhere classified. TTM remained in this category in DSM-IV and DSM-IV-TR but the diagnostic criteria included a revised version of criterion B (i.e. the experience of tension prior to hair-pulling or when attempting to resist the behavior) and E (clinically significant distress and/or impairment) ( American Psychiatric Association, 1994 and American Psychiatric Association, 2000) ( Appendix 1). In the 10th edition of the International Statistical Classification of Diseases and Related Health Problems (ICD-10) ( World Health Organization, 1992), TTM was included in the section on disorders of adult personality and behavior, where it was classified as one of the habit and impulse disorders ( Appendix 2). Research on TTM has increased significantly in the last 20 years. It has been argued recently (Stein et al., 2010) that it is timely to assess whether the reliability, validity, and clinical utility of current diagnostic criteria for TTM can be improved, and whether the categorization of TTM as an impulse control disorder is optimal. In particular, the validity and utility of criteria B and C of DSM-IV-TR (i.e. rising tension prior to or when attempting to resist pulling, and pleasure, relief or gratification during or subsequent to pulling) have been questioned. These criteria were originally intended to be consistent with TTM's grouping in the Impulse Control Disorders category. Troubling, however, is the research suggesting that approximately 20% of patients with clinically meaningful hair-pulling do not report either an increasing sense of tension or a sense of pleasure/gratification/relief related to hair-pulling (Christenson and Mansueto, 1999 and du Toit et al., 2001). In the more recent Trichotillomania Impact Project-Adults (TIP-A), an internet survey of 2268 persons with self-reported hair-pulling (Woods et al., 2006), it was found that the symptoms of tension before pulling or accompanying efforts to resist, and subsequent pleasure/relief/gratification, were quite common in people with hair-pulling. However, these internal experiences were not reported by all individuals with impairment-producing hair-pulling and, when they were present, did not necessarily occur prior to and/or after all pulling episodes. Very few studies have compared individuals meeting full criteria for DSM-IV TTM and those not meeting B and C. In a preliminary study at the MRC Unit on Anxiety and Stress Disorders (South Africa) including 47 participants with hair-pulling, few significant differences between those who met criteria B and C and those without these symptoms were found (du Toit et al., 2001). In a recent follow-up study, Lochner et al. found that 27.5% of 80 participants with chronic hair-pulling did not meet either criteria B or C (Lochner et al., 2010). A few differences were noted between participants meeting both criteria B and C and those not meeting these criteria, but none seemed clinically significant. There also were no significant differences between the two groups in terms of age, gender, age of onset, duration and severity of hair-pulling. Similarly, the TIP-A study (which did not analyze differences in hair-pulling sites and behaviors related to hair-pulling) found that subjects who met criteria B and C (endorsing both symptoms at least “a little of the time”; n = 1616) vs. those not meeting both B and C (n = 92) did not differ in hair-pulling severity, levels of depression and anxiety and impairment (Woods et al., unpublished data; Stein et al., 2010). Thus, while present at some level in most people with hair pulling, TIP-A data suggest criteria B and C are not indicative of increased pulling severity, impairment or psychological symptoms of depression and anxiety. Given the above findings, inclusion of B and C as required diagnostic criteria for the disorder can be questioned. The large TIP-A study, however, suffers the limitations associated with an internet survey, the most prominent of which is the lack of face-to-face diagnostic ascertainment. In the present study, we aimed to overcome these limitations. We used some of the questionnaires from the TIP-A study and conducted a similar analysis but used a combined sample of patients with hair-pulling from South Africa and the USA that had in-person clinical assessments. We compared patients meeting TTM criteria B and C, and those who did not satisfy both B and C, on a number of relevant clinical variables, including hair-pulling severity, levels of depression, anxiety and stress, number of comorbid body-focused repetitive behaviors and functional impairment.