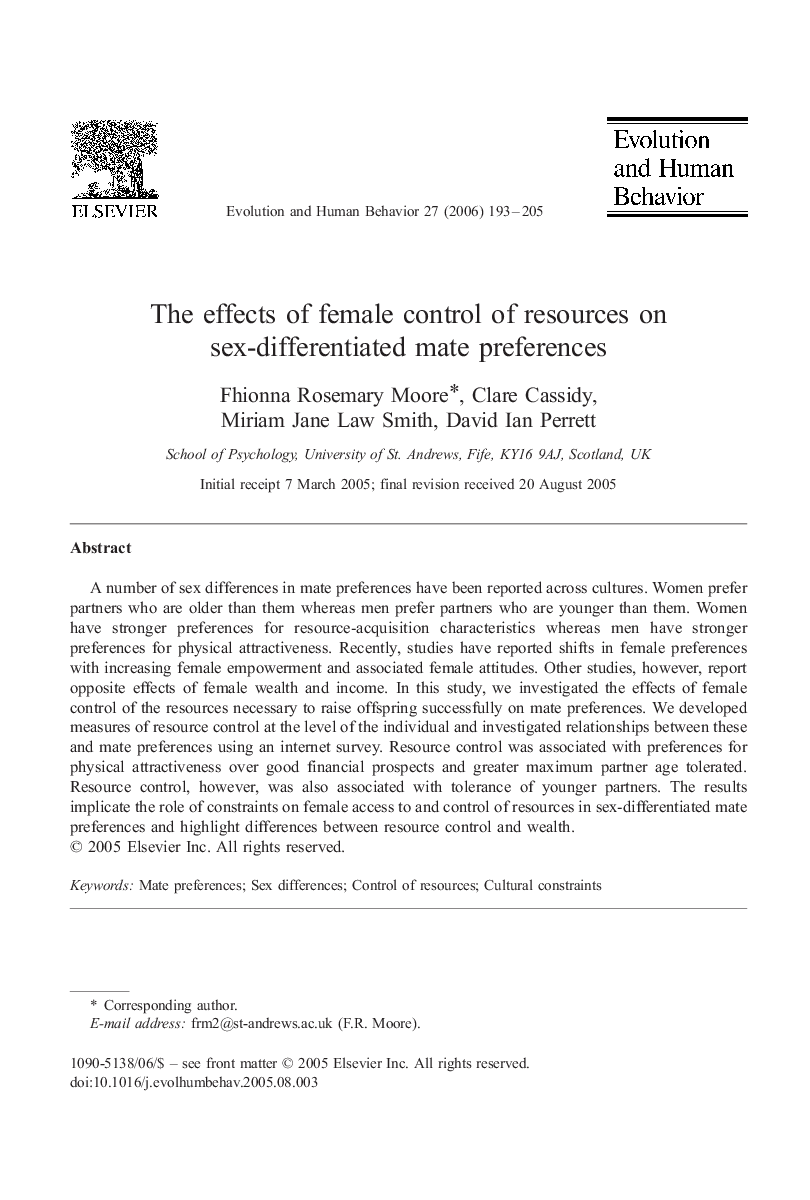 A number of sex differences in mate preferences have been reported across cultures. Women prefer partners who are older than them whereas men prefer partners who are younger than them. Women have stronger preferences for resource-acquisition characteristics whereas men have stronger preferences for physical attractiveness. Recently, studies have reported shifts in female preferences with increasing female empowerment and associated female attitudes. Other studies, however, report opposite effects of female wealth and income. In this study, we investigated the effects of female control of the resources necessary to raise offspring successfully on mate preferences. We developed measures of resource control at the level of the individual and investigated relationships between these and mate preferences using an internet survey. Resource control was associated with preferences for physical attractiveness over good financial prospects and greater maximum partner age tolerated. Resource control, however, was also associated with tolerance of younger partners. The results implicate the role of constraints on female access to and control of resources in sex-differentiated mate preferences and highlight differences between resource control and wealth.

Studies on human mate preferences have reported a number of sex differences. Women typically prefer older partners (e.g., Buss, 1989a, Kenrick & Keefe, 1992, Otta et al., 1999 and Waynforth & Dunbar, 1995). They have stronger preferences for resource-acquisition characteristics in a partner whereas men have stronger preferences for physical attractiveness (e.g., Buss, 1989a, Buss, 1990, Buss, 1994, Buss & Barnes, 1986, Feingold, 1990, Feingold, 1991, Feingold, 1992, Hill, 1945, Li et al., 2002 and Waynforth & Dunbar, 1995). These sex differences have been attributed to sex-specific reproductive constraints: the minimal investment in reproduction by a female is greater than that of a male owing to the costs of producing large gametes (Bateman, 1948), internal gestation, lactation, and extended parental care (Trivers, 1972). Thus, female reproductive success is constrained by access to the resources necessary to raise costly offspring whereas male reproductive success is constrained by access to fertile females (Trivers, 1972). Consequently, women should prefer partners who demonstrate willingness and ability to invest direct resources in offspring (e.g., partners with resource-acquisition characteristics or older partners with greater accumulated resources) and men should prefer cues to reproductive capacity and fertility (e.g., a healthy, attractive appearance).