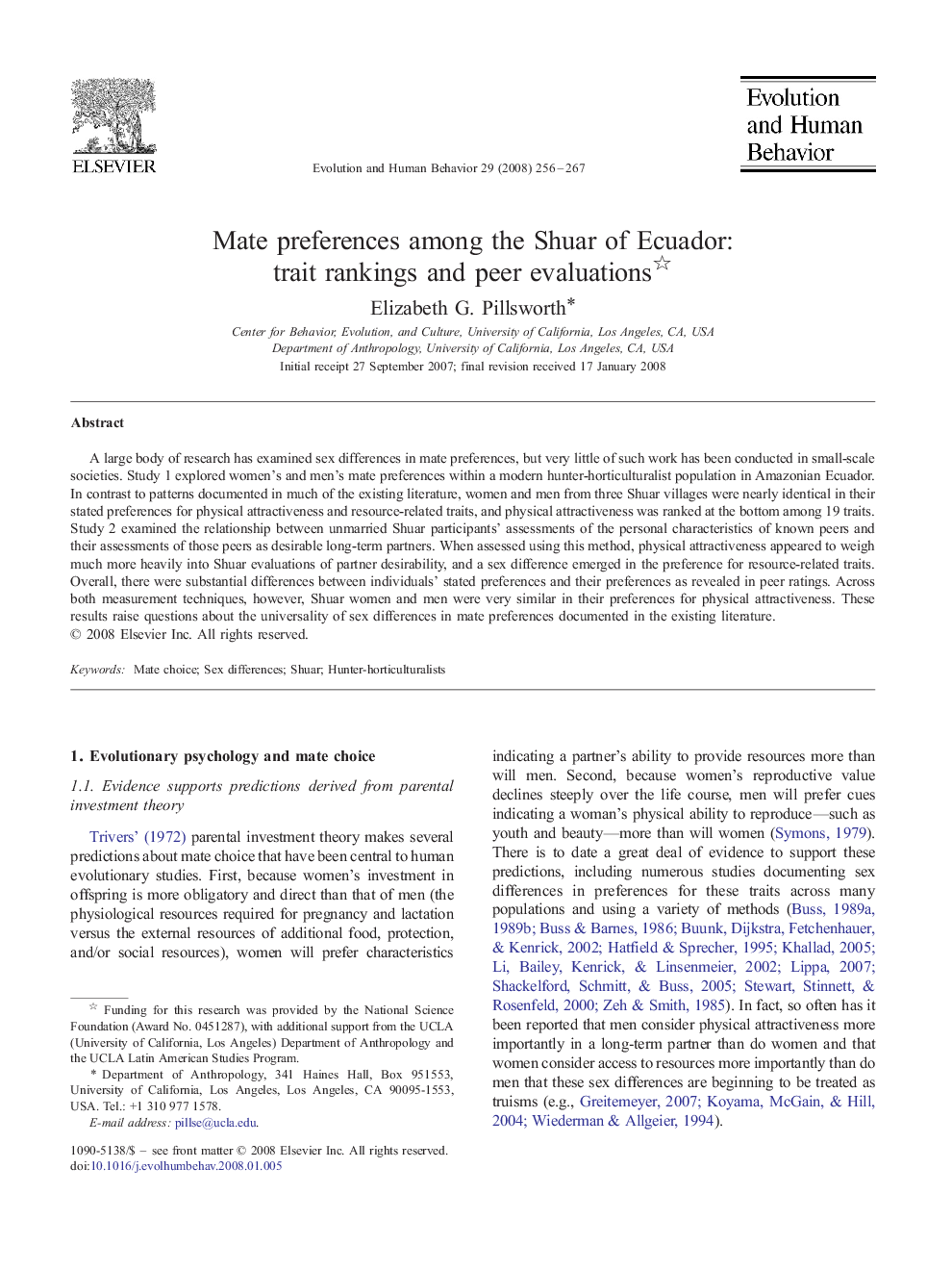 A large body of research has examined sex differences in mate preferences, but very little of such work has been conducted in small-scale societies. Study 1 explored women's and men's mate preferences within a modern hunter-horticulturalist population in Amazonian Ecuador. In contrast to patterns documented in much of the existing literature, women and men from three Shuar villages were nearly identical in their stated preferences for physical attractiveness and resource-related traits, and physical attractiveness was ranked at the bottom among 19 traits. Study 2 examined the relationship between unmarried Shuar participants' assessments of the personal characteristics of known peers and their assessments of those peers as desirable long-term partners. When assessed using this method, physical attractiveness appeared to weigh much more heavily into Shuar evaluations of partner desirability, and a sex difference emerged in the preference for resource-related traits. Overall, there were substantial differences between individuals' stated preferences and their preferences as revealed in peer ratings. Across both measurement techniques, however, Shuar women and men were very similar in their preferences for physical attractiveness. These results raise questions about the universality of sex differences in mate preferences documented in the existing literature.

Trivers' (1972) parental investment theory makes several predictions about mate choice that have been central to human evolutionary studies. First, because women's investment in offspring is more obligatory and direct than that of men (the physiological resources required for pregnancy and lactation versus the external resources of additional food, protection, and/or social resources), women will prefer characteristics indicating a partner's ability to provide resources more than will men. Second, because women's reproductive value declines steeply over the life course, men will prefer cues indicating a woman's physical ability to reproduce—such as youth and beauty—more than will women (Symons, 1979). There is to date a great deal of evidence to support these predictions, including numerous studies documenting sex differences in preferences for these traits across many populations and using a variety of methods (Buss, 1989a, Buss, 1989b, Buss & Barnes, 1986, Buunk et al., 2002, Hatfield & Sprecher, 1995, Khallad, 2005, Li et al., 2002, Lippa, 2007, Shackelford et al., 2005, Stewart et al., 2000 and Zeh & Smith, 1985). In fact, so often has it been reported that men consider physical attractiveness more importantly in a long-term partner than do women and that women consider access to resources more importantly than do men that these sex differences are beginning to be treated as truisms (e.g., Greitemeyer, 2007, Koyama et al., 2004 and Wiederman & Allgeier, 1994).