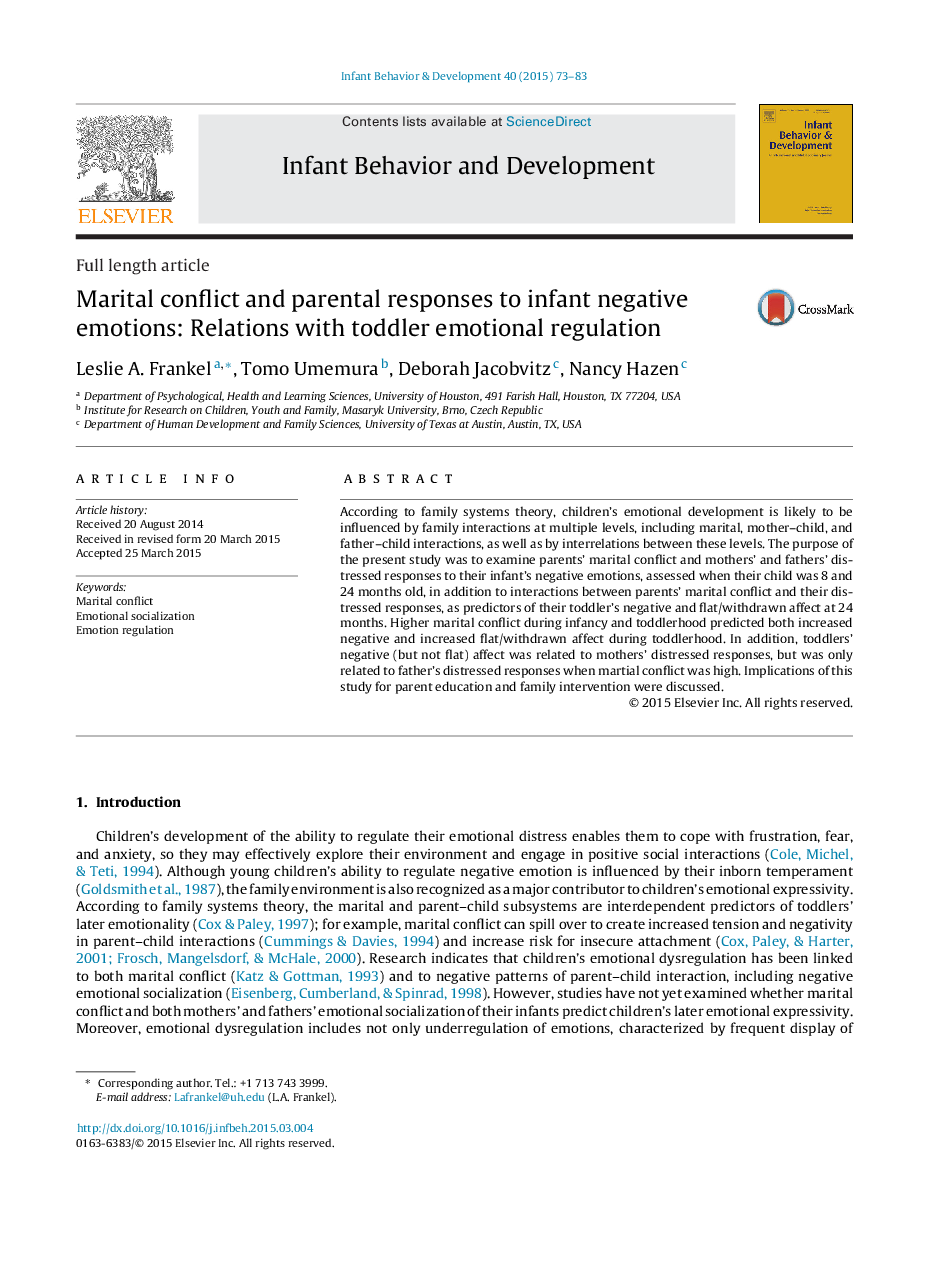 According to family systems theory, children's emotional development is likely to be influenced by family interactions at multiple levels, including marital, mother–child, and father–child interactions, as well as by interrelations between these levels. The purpose of the present study was to examine parents’ marital conflict and mothers’ and fathers’ distressed responses to their infant's negative emotions, assessed when their child was 8 and 24 months old, in addition to interactions between parents’ marital conflict and their distressed responses, as predictors of their toddler's negative and flat/withdrawn affect at 24 months. Higher marital conflict during infancy and toddlerhood predicted both increased negative and increased flat/withdrawn affect during toddlerhood. In addition, toddlers’ negative (but not flat) affect was related to mothers’ distressed responses, but was only related to father's distressed responses when martial conflict was high. Implications of this study for parent education and family intervention were discussed.

Children's development of the ability to regulate their emotional distress enables them to cope with frustration, fear, and anxiety, so they may effectively explore their environment and engage in positive social interactions (Cole, Michel, & Teti, 1994). Although young children's ability to regulate negative emotion is influenced by their inborn temperament (Goldsmith et al., 1987), the family environment is also recognized as a major contributor to children's emotional expressivity. According to family systems theory, the marital and parent–child subsystems are interdependent predictors of toddlers’ later emotionality (Cox & Paley, 1997); for example, marital conflict can spill over to create increased tension and negativity in parent–child interactions (Cummings & Davies, 1994) and increase risk for insecure attachment (Cox et al., 2001 and Frosch et al., 2000). Research indicates that children's emotional dysregulation has been linked to both marital conflict (Katz & Gottman, 1993) and to negative patterns of parent–child interaction, including negative emotional socialization (Eisenberg, Cumberland, & Spinrad, 1998). However, studies have not yet examined whether marital conflict and both mothers’ and fathers’ emotional socialization of their infants predict children's later emotional expressivity. Moreover, emotional dysregulation includes not only underregulation of emotions, characterized by frequent display of negative emotions, but also overregulation or suppression of emotions, characterized by flat affect or emotional withdrawal (Cole et al., 1994); yet little is known about family antecedents of flat/withdrawn affect in young children (Martins, Soares, Martins, Tereno, & Osório, 2012). Thus, the goal of the present study is to investigate the unique contributions and interactions of marital conflict and both parents’ emotional socialization during infancy to predicting their toddlers’ later negative and flat emotional expressivity in family interactions.