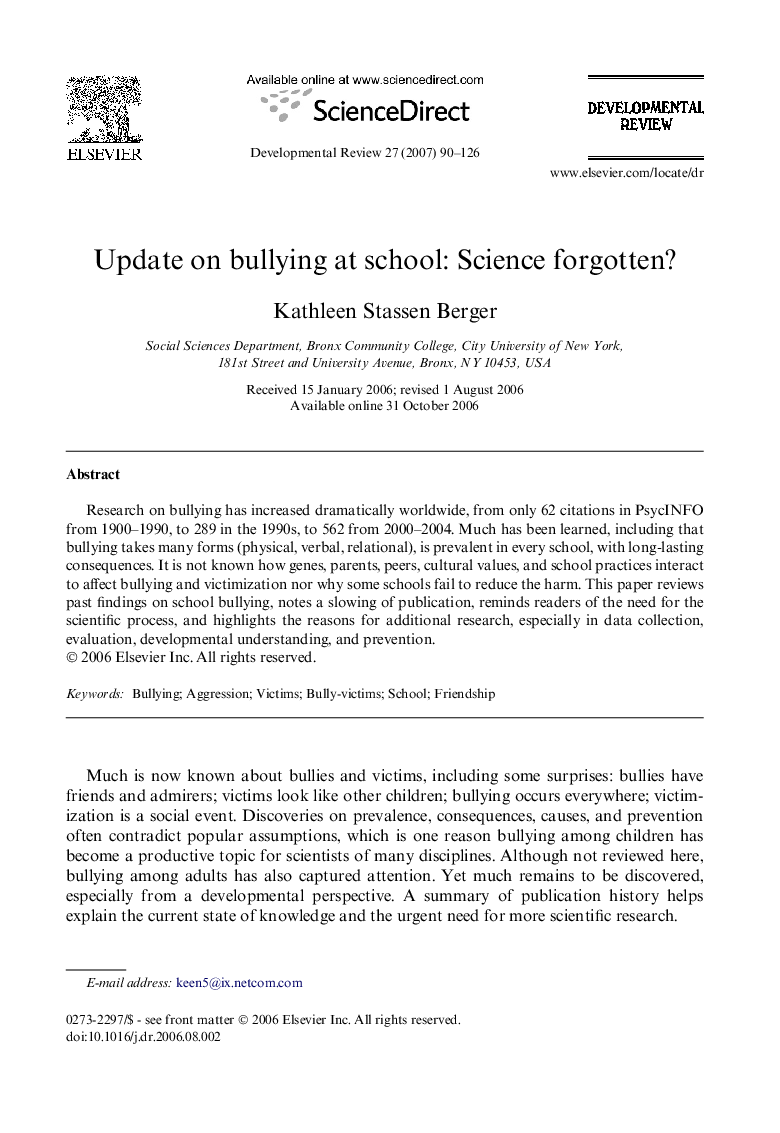 Abstract Research on bullying has increased dramatically worldwide, from only 62 citations in PsycINFO from 1900–1990, to 289 in the 1990s, to 562 from 2000–2004. Much has been learned, including that bullying takes many forms (physical, verbal, relational), is prevalent in every school, with long-lasting consequences. It is not known how genes, parents, peers, cultural values, and school practices interact to affect bullying and victimization nor why some schools fail to reduce the harm. This paper reviews past findings on school bullying, notes a slowing of publication, reminds readers of the need for the scientific process, and highlights the reasons for additional research, especially in data collection, evaluation, developmental understanding, and prevention.

Conclusion This last example illustrates a crucial point. The discovery that bullying is widespread and harmful has motivated many researchers and educators to describe, predict, and prevent it. Punctuating that research has been gunfire. Unfortunately, many school systems have avoided evaluation; many proponents of intervention have exaggerated prevalence (by reporting how many children have ever been victimized) or dramatized consequences (by highlighting homicides and suicides). Many legislatures and school systems throughout the world have vowed to eliminate bullying, but few understand the complexity of the problem. Since school shootings and adolescent suicides have declined (the US suicide rate for 11–17-year olds decreased from 5.0 to 3.3 per 100,000 from 1992 to 2002), since many adults remember childhood conflicts that strengthened them, since few researchers have educated the public about the definitions, consequences, or causes of bullying, and since many have forgotten the slow progress of science, public attention has shifted. Many scientists believe that popular culture, particularly in the US, has become hostile, turning away from “confidence in science and in rational methods of thought” as Donald Kennedy, editor-in-chief of Science, laments ( 2005, p. 165). Scientists need to redouble their efforts. No need to be disappointed, or to apologize that success is not guaranteed. The ebb and flow of popular attention, or the reality that some efforts will fail, should not halt research. Given that nothing was known about bullying a few decades ago, remarkable progress has already occurred. As scientists proceed, they must educate non-scientists. When another shocking death occurs, a wave of media attention will arouse the public. Researchers must then ride that wave, as Olweus did twenty-four years ago, using the momentum to support sustained and comprehensive intervention with scientific evaluation. As a detailed account of many anti-bullying efforts explains, there is “work to be done to convince educators, parents, policy-makers, and children themselves” (Pepler, Smith, & Rigby, 2004, p. 321). Much has been accomplished; much remains.