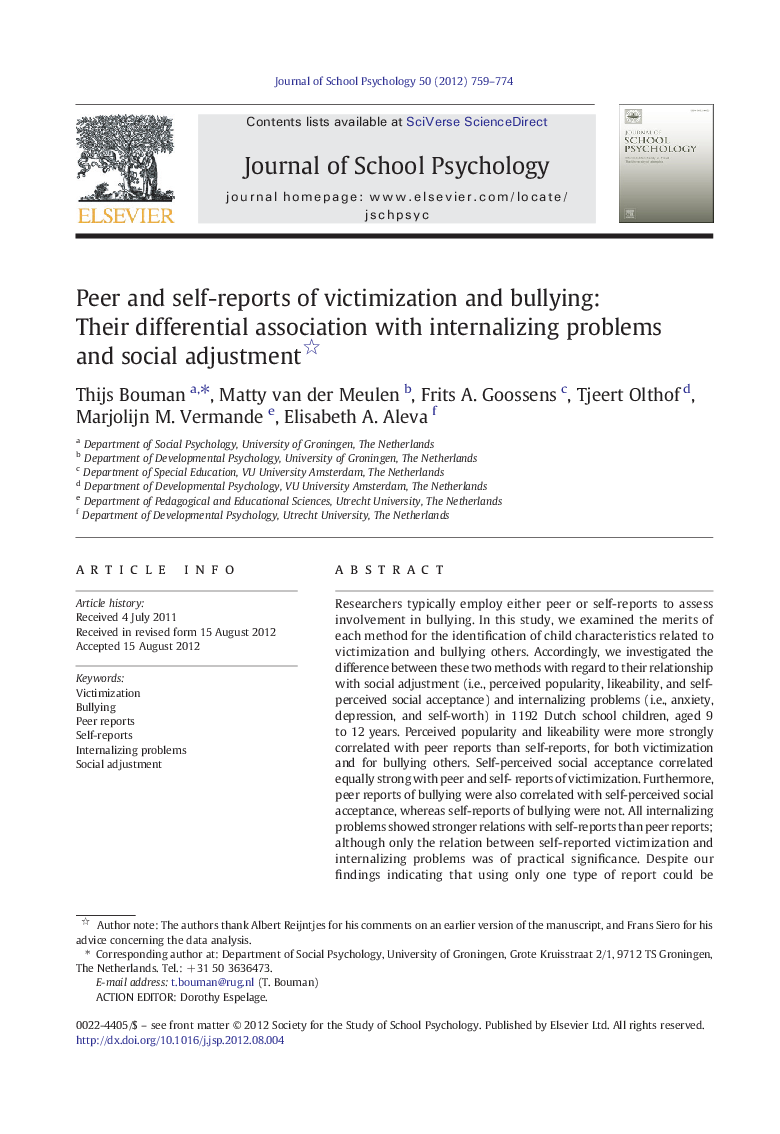 Abstract Researchers typically employ either peer or self-reports to assess involvement in bullying. In this study, we examined the merits of each method for the identification of child characteristics related to victimization and bullying others. Accordingly, we investigated the difference between these two methods with regard to their relationship with social adjustment (i.e., perceived popularity, likeability, and self-perceived social acceptance) and internalizing problems (i.e., anxiety, depression, and self-worth) in 1192 Dutch school children, aged 9 to 12 years. Perceived popularity and likeability were more strongly correlated with peer reports than self-reports, for both victimization and for bullying others. Self-perceived social acceptance correlated equally strong with peer and self- reports of victimization. Furthermore, peer reports of bullying were also correlated with self-perceived social acceptance, whereas self-reports of bullying were not. All internalizing problems showed stronger relations with self-reports than peer reports; although only the relation between self-reported victimization and internalizing problems was of practical significance. Despite our findings indicating that using only one type of report could be efficient for examining the relation between bullying behaviors and separate child characteristics, both types of report are necessary for a complete understanding of the personal and social well-being of the children involved.

1. Introduction Bullying behavior is defined as the repeated exposure to negative actions by one or more individuals over time. During those negative actions someone (the bully) intentionally attempts to inflict injury or discomfort upon another individual (the victim). Moreover, an imbalance in perceived or actual power exists between victim and bully (Greene, 2006, Olweus, 1993, Olweus, 2000 and Salmivalli and Peets, 2009). Bullying behavior can be considered normative because it is “likely to be found in any relatively enduring human group that is difficult to leave” (Smith & Brain, 2000, p. 2). School classes are such enduring groups, and many studies about bullying focus on this particular group and corresponding developmental period. Although the scientific definition is straightforward, the operationalization of this definition to assess victimization and bullying is less clear. Investigators use different methods and different informants—peers, teachers, parents, or the children themselves—to measure children's involvement in bullying. The earliest, and still most widely used method, is self-report, followed by peer reports (Cook, Williams, Guerra, & Kim, 2010). However, the advantages and disadvantages of these two methods are still hotly debated. Whereas several researchers advocate self-reports (Olweus, 1993 and Solberg and Olweus, 2003), others prefer peer reports (Cole et al., 2006, Perry et al., 1988 and Salmivalli et al., 1996), and some have argued that both measures should be used together (Branson and Cornell, 2009, Graham and Juvonen, 1998, Juvonen et al., 2001 and Salmivalli and Peets, 2009). According to the last view, both measures have their own strengths and weaknesses and should therefore be combined to complement each other. An important additional argument is that peer and self-reports appear to relate to different problems in children, as described hereafter. Relying solely on one method, therefore, may potentially obscure problems of children involved in bullying. The present study was conducted to further investigate this differential relation between peer and self-reports and children's problems observed in the bullying literature.