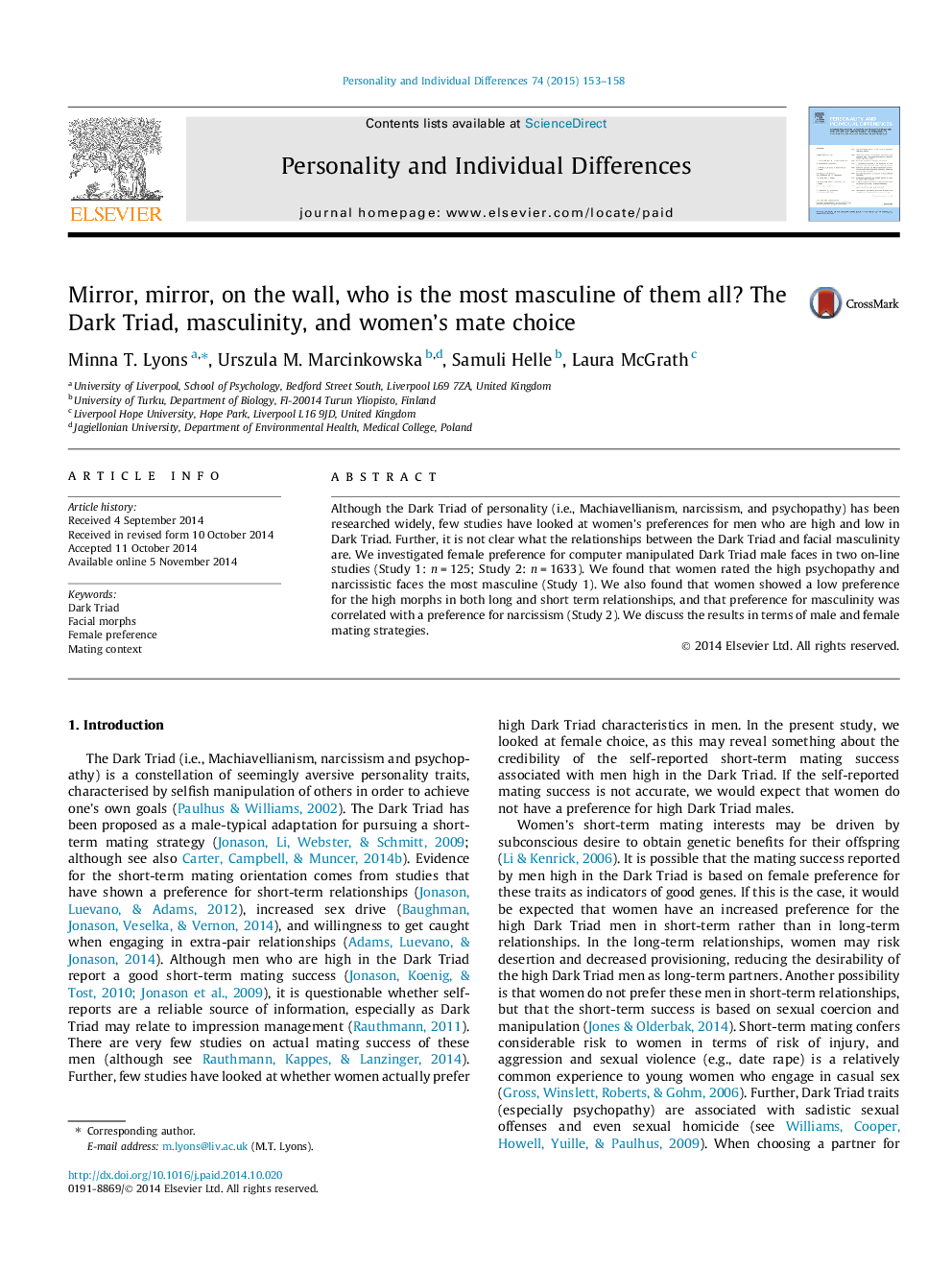 Abstract Although the Dark Triad of personality (i.e., Machiavellianism, narcissism, and psychopathy) has been researched widely, few studies have looked at women’s preferences for men who are high and low in Dark Triad. Further, it is not clear what the relationships between the Dark Triad and facial masculinity are. We investigated female preference for computer manipulated Dark Triad male faces in two on-line studies (Study 1: n = 125; Study 2: n = 1633). We found that women rated the high psychopathy and narcissistic faces the most masculine (Study 1). We also found that women showed a low preference for the high morphs in both long and short term relationships, and that preference for masculinity was correlated with a preference for narcissism (Study 2). We discuss the results in terms of male and female mating strategies.

Introduction The Dark Triad (i.e., Machiavellianism, narcissism and psychopathy) is a constellation of seemingly aversive personality traits, characterised by selfish manipulation of others in order to achieve one’s own goals (Paulhus & Williams, 2002). The Dark Triad has been proposed as a male-typical adaptation for pursuing a short-term mating strategy (Jonason, Li, Webster, & Schmitt, 2009; although see also Carter, Campbell, & Muncer, 2014b). Evidence for the short-term mating orientation comes from studies that have shown a preference for short-term relationships (Jonason, Luevano, & Adams, 2012), increased sex drive (Baughman, Jonason, Veselka, & Vernon, 2014), and willingness to get caught when engaging in extra-pair relationships (Adams, Luevano, & Jonason, 2014). Although men who are high in the Dark Triad report a good short-term mating success (Jonason et al., 2010 and Jonason et al., 2009), it is questionable whether self-reports are a reliable source of information, especially as Dark Triad may relate to impression management (Rauthmann, 2011). There are very few studies on actual mating success of these men (although see Rauthmann, Kappes, & Lanzinger, 2014). Further, few studies have looked at whether women actually prefer high Dark Triad characteristics in men. In the present study, we looked at female choice, as this may reveal something about the credibility of the self-reported short-term mating success associated with men high in the Dark Triad. If the self-reported mating success is not accurate, we would expect that women do not have a preference for high Dark Triad males. Women’s short-term mating interests may be driven by subconscious desire to obtain genetic benefits for their offspring (Li & Kenrick, 2006). It is possible that the mating success reported by men high in the Dark Triad is based on female preference for these traits as indicators of good genes. If this is the case, it would be expected that women have an increased preference for the high Dark Triad men in short-term rather than in long-term relationships. In the long-term relationships, women may risk desertion and decreased provisioning, reducing the desirability of the high Dark Triad men as long-term partners. Another possibility is that women do not prefer these men in short-term relationships, but that the short-term success is based on sexual coercion and manipulation (Jones & Olderbak, 2014). Short-term mating confers considerable risk to women in terms of risk of injury, and aggression and sexual violence (e.g., date rape) is a relatively common experience to young women who engage in casual sex (Gross, Winslett, Roberts, & Gohm, 2006). Further, Dark Triad traits (especially psychopathy) are associated with sadistic sexual offenses and even sexual homicide (see Williams, Cooper, Howell, Yuille, & Paulhus, 2009). When choosing a partner for casual sex, women would have to weight any putative genetic benefits against risking an injury, or indeed, death. Previous studies on mate appeal of the Dark Triad traits have utilised diverse methods, such as dating adverts and vignettes (e.g., Aitken et al., 2013, Carter et al., 2014a and Rauthmann and Kolar, 2013), observations of naturalistic interactions (Dufner et al., 2013 and Rauthmann et al., 2014), and ratings of photographs (Holtzman & Strube, 2013). Some of the findings suggest that women do have a preference for high Dark Triad male characteristics (Aitken et al., 2013 and Carter et al., 2014a), especially in short-term mating context (Aitken et al., 2013). Conversely, Rauthmann and Kolar (2013) found that all the three traits were aversive in both long and short term context, with narcissistic vignettes obtaining higher short-term mate value ratings than the other two traits. However, this study did not distinguish between the sexes, making it difficult to evaluate the idea that Dark Triad is a male-typical mating adaptation (Jonason et al., 2009). In the present study, we aim to add to the existing literature by using a method common in masculinity research – the facial morphing methodology (see Tiddeman, Burt, & Perrett, 2001). Previous work on facial morphs suggests that Dark Triad is visible and detectable in the craniofacial morphology of an individual (Holtzman, 2011), but there is currently no research investigating whether women prefer high morphs as potential partners depending on the mating context. Further, it is not clear how Dark Triad relates to masculinity. Masculinity is a hormonal face marker, a proxy for testosterone exposure during puberty (Johnston, 2006). Women perceive masculine faces as unfriendly, dominant, hostile, and manipulative (Johnston, Hagel, Franklin, Fink, & Grammer, 2001), all of which are typical to high Dark Triad individuals. It is generally thought that women choose characteristics associated with testosterone because these traits indicate high immunocompetence, which may be beneficial in terms of genetic inheritance for the offspring (see Rantala et al., 2012). If women’s choice for Dark Triad is similar to the choice for masculinity, it may be that the Dark Triad traits are associated with high pubertal testosterone exposure. In summary, the present study expands on the current literature on female choice for Dark Triad men. We investigate, using the facial morphing methodology, (i) whether the high Dark Triad faces are rated as more masculine than their low counterparts (Study 1), (ii) whether relationship context is related to the mate appeal of male faces that are high and low in Dark Triad, and (iii) whether women who prefer facial masculinity also prefer high Dark Triad faces (Study 2).