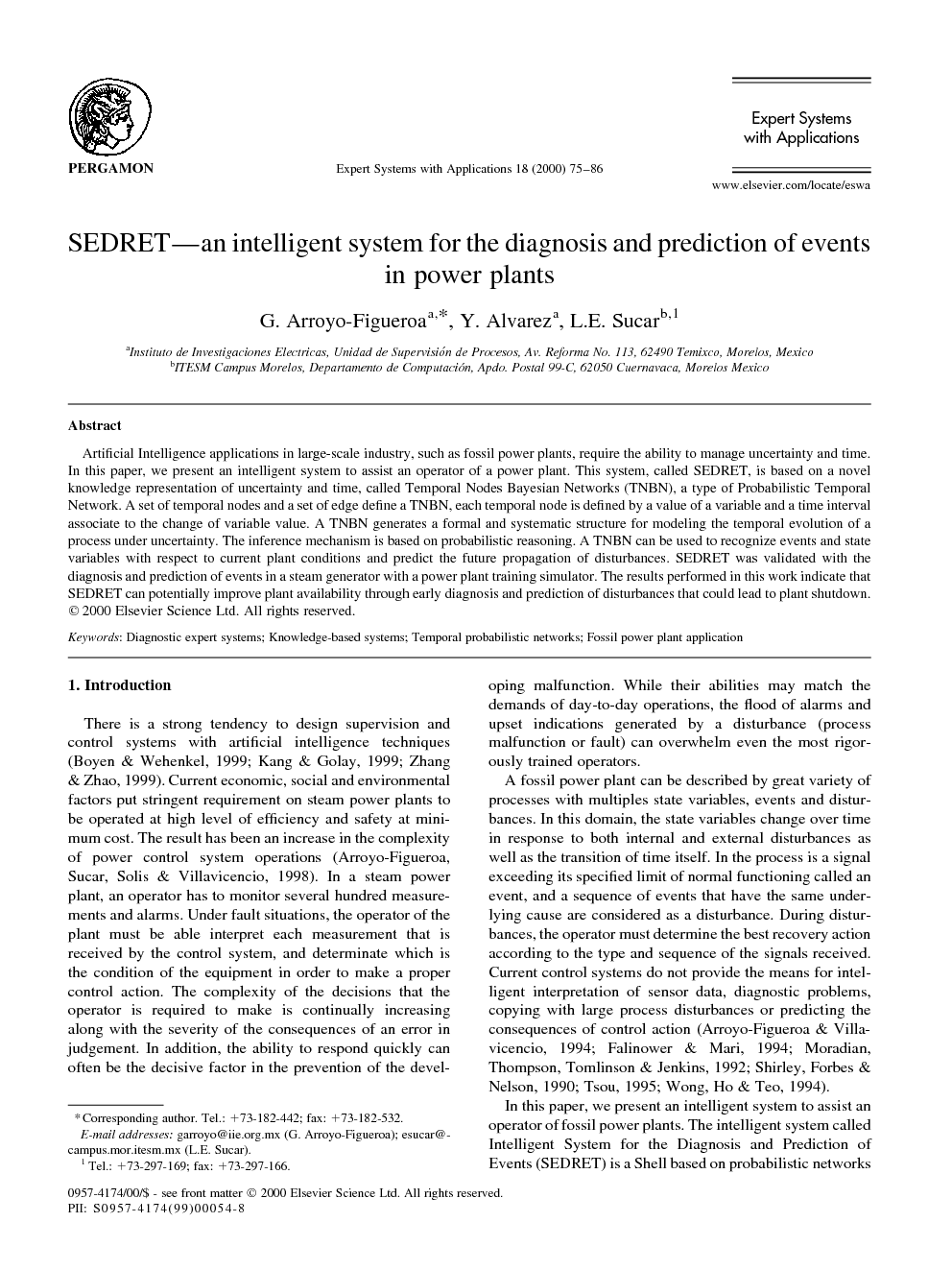 Artificial Intelligence applications in large-scale industry, such as fossil power plants, require the ability to manage uncertainty and time. In this paper, we present an intelligent system to assist an operator of a power plant. This system, called SEDRET, is based on a novel knowledge representation of uncertainty and time, called Temporal Nodes Bayesian Networks (TNBN), a type of Probabilistic Temporal Network. A set of temporal nodes and a set of edge define a TNBN, each temporal node is defined by a value of a variable and a time interval associate to the change of variable value. A TNBN generates a formal and systematic structure for modeling the temporal evolution of a process under uncertainty. The inference mechanism is based on probabilistic reasoning. A TNBN can be used to recognize events and state variables with respect to current plant conditions and predict the future propagation of disturbances. SEDRET was validated with the diagnosis and prediction of events in a steam generator with a power plant training simulator. The results performed in this work indicate that SEDRET can potentially improve plant availability through early diagnosis and prediction of disturbances that could lead to plant shutdown.

There is a strong tendency to design supervision and control systems with artificial intelligence techniques (Boyen, 1999, Kang and Golay, 1999 and Zhang and Zhao, 1999). Current economic, social and environmental factors put stringent requirement on steam power plants to be operated at high level of efficiency and safety at minimum cost. The result has been an increase in the complexity of power control system operations (Arroyo-Figueroa, Sucar, Solis & Villavicencio, 1998). In a steam power plant, an operator has to monitor several hundred measurements and alarms. Under fault situations, the operator of the plant must be able interpret each measurement that is received by the control system, and determinate which is the condition of the equipment in order to make a proper control action. The complexity of the decisions that the operator is required to make is continually increasing along with the severity of the consequences of an error in judgement. In addition, the ability to respond quickly can often be the decisive factor in the prevention of the developing malfunction. While their abilities may match the demands of day-to-day operations, the flood of alarms and upset indications generated by a disturbance (process malfunction or fault) can overwhelm even the most rigorously trained operators. A fossil power plant can be described by great variety of processes with multiples state variables, events and disturbances. In this domain, the state variables change over time in response to both internal and external disturbances as well as the transition of time itself. In the process is a signal exceeding its specified limit of normal functioning called an event, and a sequence of events that have the same underlying cause are considered as a disturbance. During disturbances, the operator must determine the best recovery action according to the type and sequence of the signals received. Current control systems do not provide the means for intelligent interpretation of sensor data, diagnostic problems, copying with large process disturbances or predicting the consequences of control action (Arroyo-Figueroa and Villavicencio, 1994, Falinower and Mari, 1994, Moradian et al., 1992, Shirley et al., 1990, Tsou, 1995 and Wong et al., 1994). In this paper, we present an intelligent system to assist an operator of fossil power plants. The intelligent system called Intelligent System for the Diagnosis and Prediction of Events (SEDRET) is a Shell based on probabilistic networks to deal with uncertainty and time. The research goal is to develop a real-time knowledge based system to act as an operational and diagnostic aid to operators of power plants. The paper is organized as follows. First, we show how the probabilistic network can deal with uncertainty and time, and present a novel methodology called Bayesian network (BN) with temporal nodes (TNBN). Afterwards, we present the design and development of an intelligent system to assist an operator of fossil power plant based on a TNBN. Finally, we illustrate its application in a fossil power plant with a detailed example: the diagnosis and prediction of events in the drum system of a steam generator.

This paper presented the design and implementation of an event and disturbance analysis system (SEDRET). SEDRET has three main tasks: construction of the probabilistic network; propagation of the evidences when an event is detected; and explanation of the causes of events and prediction of future events, and their time intervals. This system can be used to assist an operator in real-time assessment of plant disturbances and in this way contribute to the safe and economic operation of power plants. Development of SEDRET was initially motivated by the desire to improve plant availability through early diagnosis and prediction of events and disturbances that could lead to plant shutdown. An intelligent framework for event and disturbance analysis has been a primary objective throughout the project. The framework is based on a novel methodology for dealing with uncertainty and time called TNBN. A TNBN generates a formal and systematic structure used to model the temporal evolution of a process under uncertainty. The inference mechanism consists in the propagation of evidences through the net using a probabilistic technique. TNBN model is based on representing changes of state in each node. If the number of possible state changes for each variable in the temporal range is small, the resulting model is much simpler. This facilitates temporal knowledge acquisition and allows efficient inference using probability propagation. The model supports multiple granularity, with different number of temporal intervals for each node, and different duration for each interval within a node. In contrast, previous probabilistic temporal models are, in general, based on static models repeated at different times. The resulting models are quite complex for many applications and they support a single granularity. The tests confirmed the ability of SEDRET to properly diagnose disturbances under abnormal situations. Three disturbances were modeled in detail for the steam generator system using data from the training simulator. The primary benefits of the system are: (a) an early and precise diagnosis and prediction of events; and (b) an improvement in the timeliness of the corrective action by the operator. The results of the experiments show the application of SEDRET for power plants. Nevertheless, this formalism can be applied to other dynamic domains, such as clinical diagnosis, planning, and forecasting. At present, the probabilistic intelligent system is a prototype to be tested in a real fossil power plant. Our future work will be focused on developing and integrating our approach in a real time diagnostic system and in modeling other industrial domains, such as petroleum refineries.