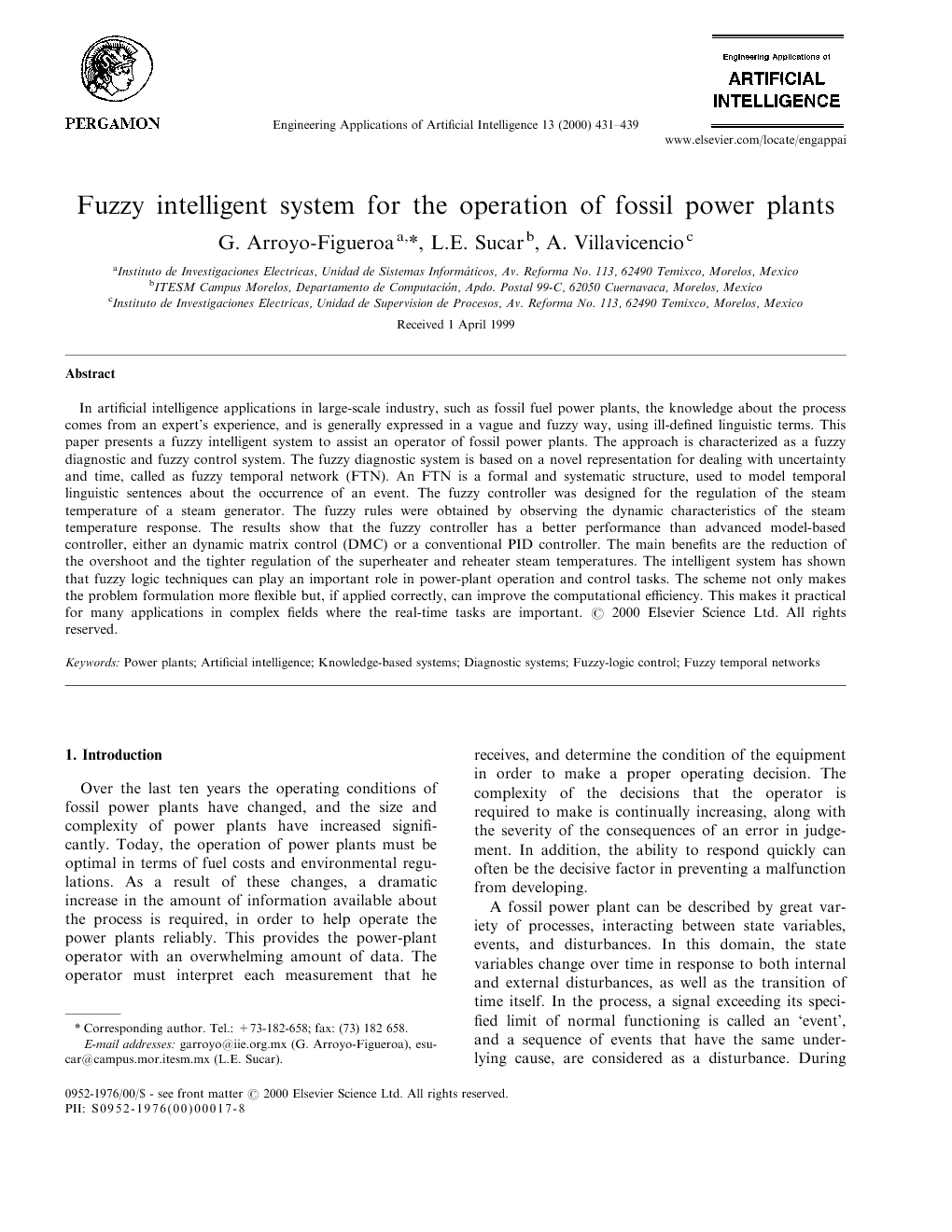 In artificial intelligence applications in large-scale industry, such as fossil fuel power plants, the knowledge about the process comes from an expert's experience, and is generally expressed in a vague and fuzzy way, using ill-defined linguistic terms. This paper presents a fuzzy intelligent system to assist an operator of fossil power plants. The approach is characterized as a fuzzy diagnostic and fuzzy control system. The fuzzy diagnostic system is based on a novel representation for dealing with uncertainty and time, called as fuzzy temporal network (FTN). An FTN is a formal and systematic structure, used to model temporal linguistic sentences about the occurrence of an event. The fuzzy controller was designed for the regulation of the steam temperature of a steam generator. The fuzzy rules were obtained by observing the dynamic characteristics of the steam temperature response. The results show that the fuzzy controller has a better performance than advanced model-based controller, either an dynamic matrix control (DMC) or a conventional PID controller. The main benefits are the reduction of the overshoot and the tighter regulation of the superheater and reheater steam temperatures. The intelligent system has shown that fuzzy logic techniques can play an important role in power-plant operation and control tasks. The scheme not only makes the problem formulation more flexible but, if applied correctly, can improve the computational efficiency. This makes it practical for many applications in complex fields where the real-time tasks are important.

Over the last ten years the operating conditions of fossil power plants have changed, and the size and complexity of power plants have increased significantly. Today, the operation of power plants must be optimal in terms of fuel costs and environmental regulations. As a result of these changes, a dramatic increase in the amount of information available about the process is required, in order to help operate the power plants reliably. This provides the power-plant operator with an overwhelming amount of data. The operator must interpret each measurement that he receives, and determine the condition of the equipment in order to make a proper operating decision. The complexity of the decisions that the operator is required to make is continually increasing, along with the severity of the consequences of an error in judgement. In addition, the ability to respond quickly can often be the decisive factor in preventing a malfunction from developing. A fossil power plant can be described by great variety of processes, interacting between state variables, events, and disturbances. In this domain, the state variables change over time in response to both internal and external disturbances, as well as the transition of time itself. In the process, a signal exceeding its specified limit of normal functioning is called an ‘event’, and a sequence of events that have the same underlying cause, are considered as a disturbance. During disturbances, the operator must determine the best recovery action according to the type and sequence of the signals received. Current control systems do not provide the means for intelligent interpretation of sensor data, problem diagnosis, coping with large process disturbances or predicting the consequences of control actions. In a major upset, the operator may be confronted with a large number of alarms, but very limited help from the system, concerning the underlying plant condition. To understand the plant condition will require the time-consuming task of analyzing the incoming data, before any action is taken. Analytical solution methods exist for many power operation and control problems. However, the mathematical formulations of real-word processes are derived under certain restrictive assumptions, and even with these assumptions the resolution of power-plant problems is not trivial. On the other hand, there are many uncertainties in the process, because power plants are large, complex and influenced by unexpected events and the evolution of time. Therefore, there is a growing tendency to design supervision and control systems using artificial intelligence techniques as a complement to mathematical approaches; these have proved to be effective when properly coupled together (Santos et al., 1996, Yager, 1997 and Yen, 1999). Artificial intelligence techniques have been through extensive practical implementations in industry in the form of intelligent control. One of the most successful expert-system techniques, applied to a wide range of control applications, has been fuzzy-set theory (Mamdani, 1994, Monoh et al., 1995 and Verbruggen and Babuska, 1999). The expert's empirical knowledge is generally expressed in language containing ambiguous or vague descriptions. The use of fuzzy sets provides a very powerful tool for extending the capability of binary logic in ways that enable a much better representation of this knowledge. From the process-control point of view, fuzzy approaches provide good support for translating the heuristic skilled operator's knowledge about the process and control procedures (expressed as imprecise linguistic sentences) into numerical algorithms (Kandel et al., 1999). The growing number of publications on applications of fuzzy-set-based techniques to industrial automation indicates its potential role in solving power-plant problems. Some applications, such as diagnostic systems (Chen, 1995, Arroyo-Figueroa et al., 1998 and Feng et al., 1998); fuzzy classification (Yuan and Shaw, 1995 and Boyen and Wehenkel, 1999); and decision support systems (Zimmerman, 1996, El-Hawary, 1998 and Feng and Xu, 1999); could be implemented to assist the operator of a power plant. In the context of power plants, the knowledge comes from an expert's experience, but this experience is generally expressed in a vague fuzzy imprecise way, using ill-defined linguistic sentences such as “The temperature is fairly high”, or “The event occurs after 3 min”. With fuzzy logic, each linguistic sentence can be defined by a possibility distribution, and used for reasoning tasks in a diagnostic system. For control proposes, the nonlinearities of the process can be modeled using fuzzy-logic techniques (Verbruggen and Bruijn, 1997). This paper deals with the diagnostic and control tasks, proposing the application of fuzzy-logic techniques in a fossil power plant. The aim of the fuzzy expert system is to assist an operator of the power plant. The paper is organized as follows. A brief description of the architecture of the fuzzy expert system is given in Section 2. In Section 3, the fuzzy diagnostic shell is described. The fuzzy diagnostic shell is based on a novel methodology for dealing with uncertainty and time, called ‘fuzzy temporal network’ (FTN). The diagnosis of a power load increment is presented as illustrative example. Section 4 presents the design and development of the fuzzy-logic controller for steam temperature regulation. The performance of the fuzzy controller was evaluated against two other kinds of controllers, the conventional PID controller and the predictive DMC controller. Section 5 presents the main conclusions according to the analysis and results derived from the development.

In this paper, the development of a fuzzy intelligent system to diagnose and control a fossil power plant has been presented. The development of the system was initially motivated by a desire to improve plant availability through the early diagnosis of disturbances that could lead to plant shutdowns and the tight regulation of critical variables. The capability of this intelligent system to improve the performance of fossil power plants comes from the integration of techniques for diagnostic and control tasks, based on fuzzy logic. The diagnostic system for event and disturbance analysis is based on a novel methodology for dealing with uncertainty and time, called a FTN. The FTN generates a formal and systematic structure, used to model the temporal evolution of a process under uncertainty. The FTN inference mechanism consists of the calculation of the possibility degree of the real-time occurrence of events, using the fuzzy compositional rule of Zadeh (sup_min). The FTN provides an alternative methodology for modeling processes driving diagnostic tasks. The diagnostic system was evaluated by a limited number of disturbances in the drum-level feedwater system. The system gives information that indicates which is the main disturbance, as well as potential future events. The experimental results show that for steam temperature regulation, a fuzzy-logic controller can achieve better performance than either an advanced controller such as a DMC or a conventional PID controller. The main benefits are the reduction of the overshoot and the tighter regulation of the superheater and reheater steam temperatures. Fuzzy-logic controllers can achieve good result for complex nonlinear processes with dynamic variation or with long deadtimes, such as the steam temperature regulation. The knowledge base of the fuzzy system is a multifunctional knowledge base, composed of FTNs and controller rules as the models, fuzzy compositional rules as the inference mechanism, and fuzzy operators for diagnosis and control. It appears that fuzzy-logic techniques can play an important role in power plant operation and control task. This scheme not only makes the problem formulation more flexible but, if applied correctly, can improve the computational efficiency. This makes it practical for many applications in complex fields where the real-time tasks are important. Due to the good results obtained with the fuzzy intelligent system, it can lead to potential improvements in the power-plant parameter performance, like better efficiency, availability and reliability. Current research efforts are being focused on the application of this diagnostic and controll system to other systems and loops of the power plant. The objective is to integrate this multifunctional knowledge-based system for the operation of the entire power plant and to apply this system in a real power plant.