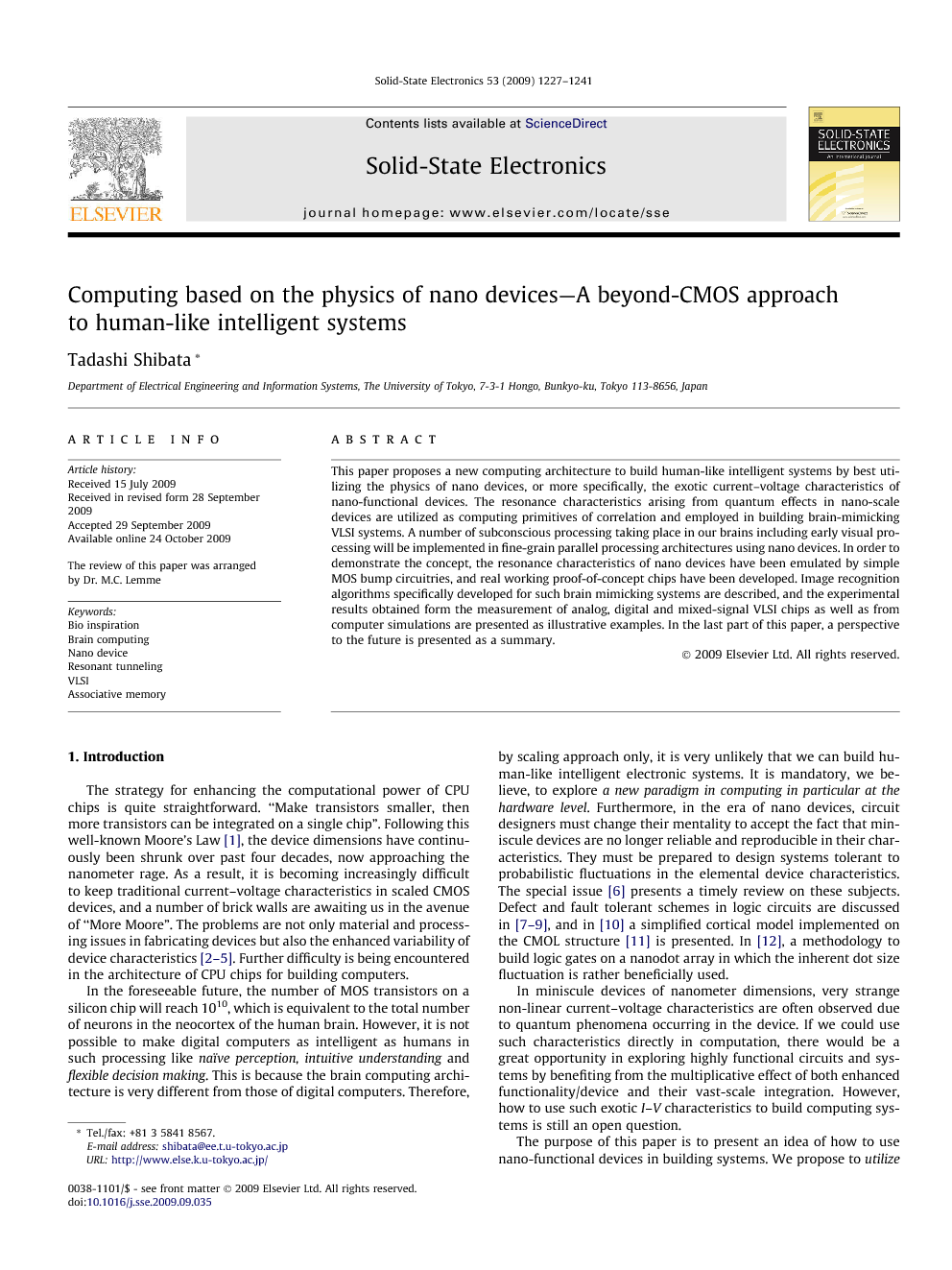 This paper proposes a new computing architecture to build human-like intelligent systems by best utilizing the physics of nano devices, or more specifically, the exotic current–voltage characteristics of nano-functional devices. The resonance characteristics arising from quantum effects in nano-scale devices are utilized as computing primitives of correlation and employed in building brain-mimicking VLSI systems. A number of subconscious processing taking place in our brains including early visual processing will be implemented in fine-grain parallel processing architectures using nano devices. In order to demonstrate the concept, the resonance characteristics of nano devices have been emulated by simple MOS bump circuitries, and real working proof-of-concept chips have been developed. Image recognition algorithms specifically developed for such brain mimicking systems are described, and the experimental results obtained form the measurement of analog, digital and mixed-signal VLSI chips as well as from computer simulations are presented as illustrative examples. In the last part of this paper, a perspective to the future is presented as a summary.

The strategy for enhancing the computational power of CPU chips is quite straightforward. “Make transistors smaller, then more transistors can be integrated on a single chip”. Following this well-known Moore’s Law [1], the device dimensions have continuously been shrunk over past four decades, now approaching the nanometer rage. As a result, it is becoming increasingly difficult to keep traditional current–voltage characteristics in scaled CMOS devices, and a number of brick walls are awaiting us in the avenue of “More Moore”. The problems are not only material and processing issues in fabricating devices but also the enhanced variability of device characteristics [2], [3], [4] and [5]. Further difficulty is being encountered in the architecture of CPU chips for building computers. In the foreseeable future, the number of MOS transistors on a silicon chip will reach 1010, which is equivalent to the total number of neurons in the neocortex of the human brain. However, it is not possible to make digital computers as intelligent as humans in such processing like naïve perception, intuitive understanding and flexible decision making. This is because the brain computing architecture is very different from those of digital computers. Therefore, by scaling approach only, it is very unlikely that we can build human-like intelligent electronic systems. It is mandatory, we believe, to explore a new paradigm in computing in particular at the hardware level. Furthermore, in the era of nano devices, circuit designers must change their mentality to accept the fact that miniscule devices are no longer reliable and reproducible in their characteristics. They must be prepared to design systems tolerant to probabilistic fluctuations in the elemental device characteristics. The special issue [6] presents a timely review on these subjects. Defect and fault tolerant schemes in logic circuits are discussed in [7], [8] and [9], and in [10] a simplified cortical model implemented on the CMOL structure [11] is presented. In [12], a methodology to build logic gates on a nanodot array in which the inherent dot size fluctuation is rather beneficially used. In miniscule devices of nanometer dimensions, very strange non-linear current–voltage characteristics are often observed due to quantum phenomena occurring in the device. If we could use such characteristics directly in computation, there would be a great opportunity in exploring highly functional circuits and systems by benefiting from the multiplicative effect of both enhanced functionality/device and their vast-scale integration. However, how to use such exotic I–V characteristics to build computing systems is still an open question. The purpose of this paper is to present an idea of how to use nano-functional devices in building systems. We propose to utilize the exotic characteristics of nano-functional devices to build human-like intelligent systems. The basic functionality of “intelligence” is produced by the resonance characteristics of quantum devices. The functionality of such systems is enhanced in proportion to the total number of devices on the chip. Therefore the approach is best fitting to the vast-scale integration enabled by nano-scale devices. In addition, since the human-like decision is realized based on the majority voting principle, the system operation is not very sensitive to the fluctuation in elemental device characteristics. Therefore, we can provide an answer to the question how we can utilize the exotic non-linear characteristics of nano devices to build computing systems that exhibit performances far superior to those of “More-Moore” digital computers.

As long as the Boolean logics are concerned, traditional CMOS devices and circuits will do the best. Therefore, every effort must be continued to make digital computer technology to grow following the Moore’s law. However, we should not be too optimistic to believe any computational task would be made possible with the advent of nano device technology and resultant enhancement in the computational powers of nano-device CPUs. Ultimately scaled CMOS devices will suffer from the variability issues, which make it prohibitively difficult to keep the digital CPU technologies growing faithfully following the Moore’s law. We propose to partition the entire class of computation into two categories: the rigorous logic-based computation that the traditional digital architecture can do the best and the rest. In the latter, there would be a certain class of computation roughly classified as human-like flexible computing or so-called soft computing. Humans are inferior to digital computers in carrying out complex logics and a large volume of numerical calculation in high precision, but much superior in making decisions by intuition. The mechanism of such intuition in the brain is not yet known, but would probably be working based on the majority voting principle among a huge number of neurons in the brain. Therefore such decision making is not prone to statistical errors occurring at the very elemental device level. Human-like flexible computing systems not accessible by traditional digital technologies would be a promising candidate best fitting to the application of nano-scale devices. The reasons are as in the following: (1)By miniaturizing the device dimensions, quantum effects manifest themselves, making single device characteristics more functional than traditional NMOS’ and PMOS’, which might be utilized to implement fragmental functions in the intelligent processing. (2)With the miniaturized device dimensions, the vast-scale integration of nano-functional devices is realized, enhancing the system performance by the multiplicative effect of a large number of devices on a single chip and the enhanced functionality/device. (3)Human-like intelligent computing is not yet realized in digital computer systems because the algorithms of human brain is not yet known, providing a lot of opportunities for nano-device systems to emerge. (4)Such human-like intelligent systems would be robust against statistical fluctuations occurring at the elemental device level that are inherent in nano-scale devices. Then, how can we build human-like intelligent systems? Building neuronal networks faithfully following the biological reality would not be a solution. A single neuron in the neocortex has about 10,000 inputs each with a non-volatile synaptic weight memory and transmits the output signal to other about 10,000 neurons. The total number of neurons in the neocortex would be the order of 1010, which is not an impossible number. But the complexity of the interconnection is by any means prohibitive and impossible to build. Only with the real three-dimensional interconnect structure available in biology, it would be possible. This we call “missing-one-dimension problem” of VLSI chips which are inherently of two-dimensional nature. In addition the mechanism of the higher cognitive function of the brain from the very neuron level is not known. We must be aware of the most fundamental functional unit in the brain, higher than a single neuron level. It is known that the neocortex (or also known as the gray matter constituting the surface area of the brain, having the area of about 2000 mm2 and the thickness of about 2 mm.) is quite uniform in the structure indifferent to their functions specific to partitioned areas like auditory area, visual cortex etc. It is also known that the neocortex is composed of columns [58], each column having the diameter of 50 μm and the height equal to the thickness of the neocortex. In the study of the monkey brain in the visual cortex, each column is tuned to a “specific pattern” [59]. Namely, the neocortex can be well viewed as an associative processor storing a huge number of elemental patterns (see Fig. 4a). Any object is recognized as a combination of such elemental patterns. This is the discovery in neurophysiology studies. If we mimic such associative processor by nano devices, we could possibly find a way to brain like image processing. “Association to specific pattern” can be interpreted as the “resonance to specific image vector” in the terminology of semiconductor device and circuitry. This is the reason why we are proposing the following: “The characteristics of nano-device (or whatever other devices) essential to build “human-like intelligence systems” is the resonance characteristics in a three-terminal device”. Such resonance characteristics are prevailing from the very primitive early visual processing to the highest cognitive function of the conscious mind. Namely, the directional edge detection at the first visual cortex can be viewed as the resonance (or association) of the partial input image to the most probable direction of line and/or contours. At the other end, our conscious minds decide our behaviors always by referring to the experience in the past. This is also the association to the memorized knowledge. Of course many pattern recognition tasks are carried out by template matching to the memorized patterns, which is the most naïve form of resonance or association. Furthermore, motion detection, stereo vision, etc. are all another form of correlation. Therefore there are a lot of opportunities for nano devices having resonance characteristics to participate in building morphic computational systems. In addition, nano devices would be organized as an array of SIMD processing elements, implementing fine-grain massively-parallel architectures. Such a configuration has a very good affinity to a variety of self-assembling nano process technologies that could be utilized for fabricating vast-scale-integrated nano-device circuits and systems in the era of beyond CMOS.