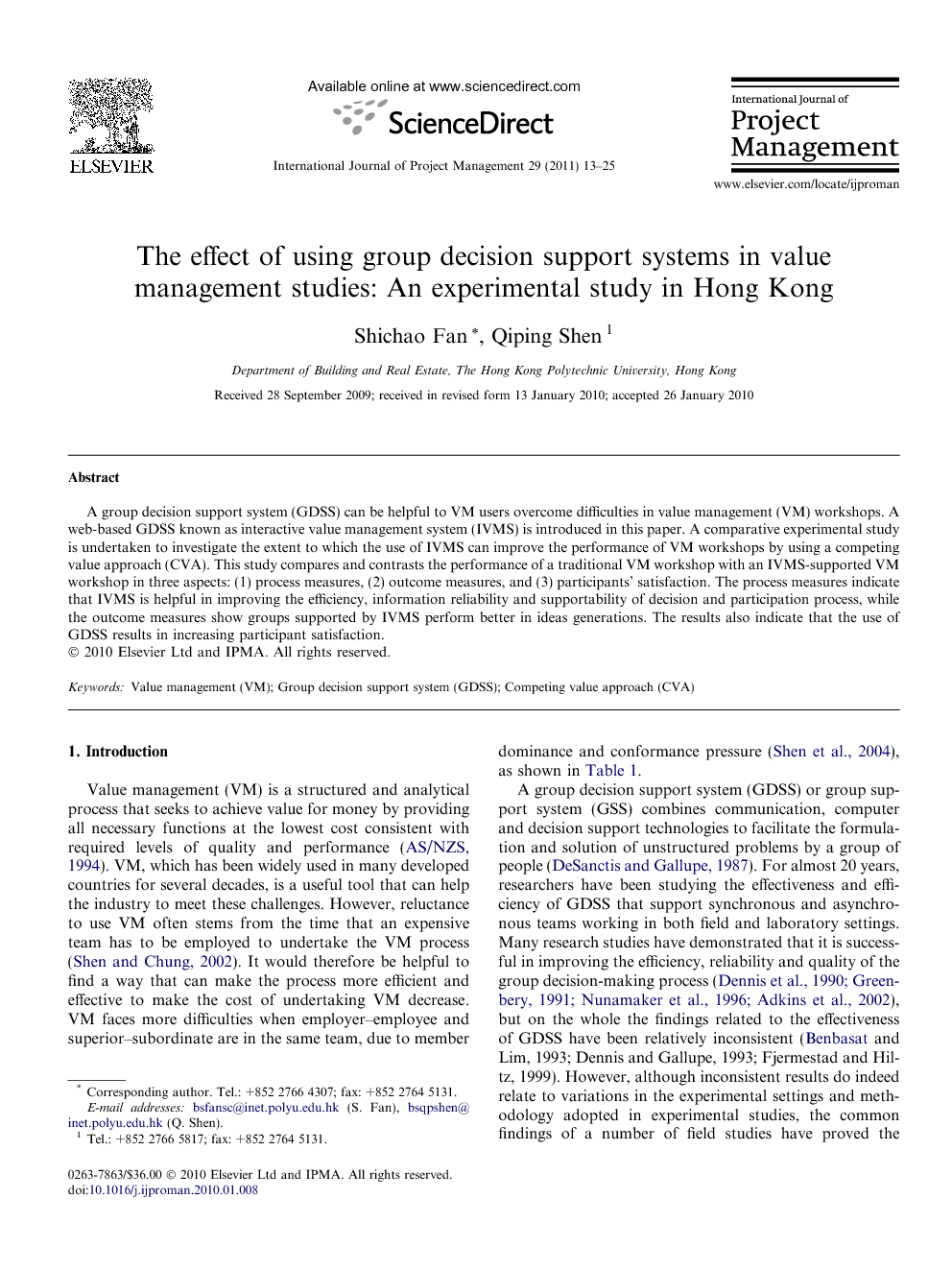 A group decision support system (GDSS) can be helpful to VM users overcome difficulties in value management (VM) workshops. A web-based GDSS known as interactive value management system (IVMS) is introduced in this paper. A comparative experimental study is undertaken to investigate the extent to which the use of IVMS can improve the performance of VM workshops by using a competing value approach (CVA). This study compares and contrasts the performance of a traditional VM workshop with an IVMS-supported VM workshop in three aspects: (1) process measures, (2) outcome measures, and (3) participants’ satisfaction. The process measures indicate that IVMS is helpful in improving the efficiency, information reliability and supportability of decision and participation process, while the outcome measures show groups supported by IVMS perform better in ideas generations. The results also indicate that the use of GDSS results in increasing participant satisfaction.

Value management (VM) is a structured and analytical process that seeks to achieve value for money by providing all necessary functions at the lowest cost consistent with required levels of quality and performance (AS/NZS, 1994). VM, which has been widely used in many developed countries for several decades, is a useful tool that can help the industry to meet these challenges. However, reluctance to use VM often stems from the time that an expensive team has to be employed to undertake the VM process (Shen and Chung, 2002). It would therefore be helpful to find a way that can make the process more efficient and effective to make the cost of undertaking VM decrease. VM faces more difficulties when employer–employee and superior–subordinate are in the same team, due to member dominance and conformance pressure (Shen et al., 2004), as shown in Table 1.A group decision support system (GDSS) or group support system (GSS) combines communication, computer and decision support technologies to facilitate the formulation and solution of unstructured problems by a group of people (DeSanctis and Gallupe, 1987). For almost 20 years, researchers have been studying the effectiveness and efficiency of GDSS that support synchronous and asynchronous teams working in both field and laboratory settings. Many research studies have demonstrated that it is successful in improving the efficiency, reliability and quality of the group decision-making process (Dennis et al., 1990, Greenbery, 1991, Nunamaker et al., 1996 and Adkins et al., 2002), but on the whole the findings related to the effectiveness of GDSS have been relatively inconsistent (Benbasat and Lim, 1993, Dennis and Gallupe, 1993 and Fjermestad and Hiltz, 1999). However, although inconsistent results do indeed relate to variations in the experimental settings and methodology adopted in experimental studies, the common findings of a number of field studies have proved the effectiveness of GDSS in practice. These field studies have consistently shown positive results, and many “real world” users are satisfied with GDSS applications. These findings demonstrate the effectiveness of GDSS in supporting the group decision-making process (e.g., Dennis and Gallupe, 1993 and Chun and Park, 1998). Since the above research findings show that GDSS has the potential to improve the group decision-making process, GDSS was proposed to overcome the above problems in VM workshops. A series of studies have already been conducted to investigate the effectiveness of using GDSS in VM workshops (Fan and Shen, 2004, Shen and Fan, 2005, Shen et al., 2006, Fan et al., 2006 and Fan et al., 2007). During the above studies, comparative experimental studies were taken as the main research method. Workshops conducted in traditional ways have been compared with workshops with GDSS support in several aspects (i.e., the decision quality, the quantity of ideas, and the perceived satisfaction). The results of these experimental studies show that GDSS is a useful tool in facilitating information exchange process, encouraging interaction, and promoting active participation in VM workshops. However, these findings were only based on the assessment of outcomes, and process effectiveness was overlooked. Now the question is how to evaluate the performance of GDSS in VM workshops comprehensively. Researchers have different viewpoints on what is or how a performance factor should be measured. Following the approach of Drazin and Van de Ven, 1985 and Benbasat and Lim, 1993, and Dennis and Kinney, 1998 and Dennis and Wixom, 2002 defined performance in terms of three major factors: (1) effectiveness as defined by decision quality or number of ideas generated; (2) efficiency as defined by the time to complete the task, and (3) participants’ satisfaction with the process or outcomes. In order to investigate the performance of GDSS-supported VM workshops comprehensively, a comparative experimental study is conducted based on the performance framework developed by (Dennis and Wixom, 2002). According to the framework, this paper compares and contrasts the performance of a traditional and GDSS-supported VM workshop in three aspects: (1) efficiency (process measures), (2) effectiveness (outcome measures), and (3) participants’ satisfaction. This paper further revised this framework by integrating with a competing values approach (CVA) which is mainly used to measure the process performance. After the introduction of the framework, this paper turns to describe the design and process of the experimental study. Finally, the results of this experiment are presented and discussed.

This paper investigated the performance of using IVMS in a VM workshop in three aspects through a comparative study: process measures, outcome measures, and participants’ satisfaction. The results of process measures illustrate that IVMS can improve the process of VM workshops in three aspects: efficiency of process, data-based process, and participatory process. The outcome measures show that groups using IVMS can generate more unique ideas and more unique P1 ideas than the groups with face-to-face brainstorming. The participants were also more satisfied with the IVMS-supported VM workshop. All of these findings indicate that IVMS can be a useful tool in facilitating the information exchange process, encouraging interaction, and promoting active participation in VM workshops.