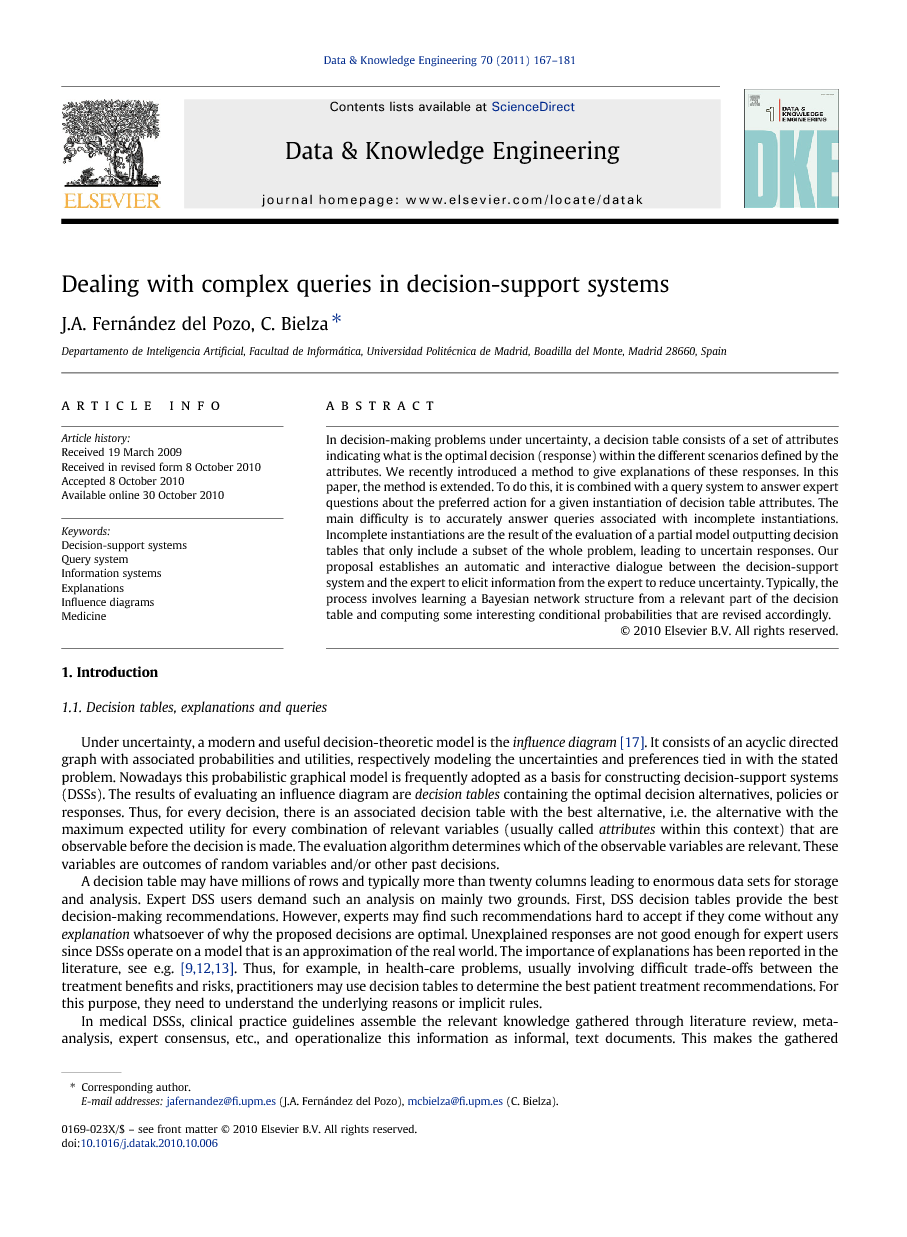 In decision-making problems under uncertainty, a decision table consists of a set of attributes indicating what is the optimal decision (response) within the different scenarios defined by the attributes. We recently introduced a method to give explanations of these responses. In this paper, the method is extended. To do this, it is combined with a query system to answer expert questions about the preferred action for a given instantiation of decision table attributes. The main difficulty is to accurately answer queries associated with incomplete instantiations. Incomplete instantiations are the result of the evaluation of a partial model outputting decision tables that only include a subset of the whole problem, leading to uncertain responses. Our proposal establishes an automatic and interactive dialogue between the decision-support system and the expert to elicit information from the expert to reduce uncertainty. Typically, the process involves learning a Bayesian network structure from a relevant part of the decision table and computing some interesting conditional probabilities that are revised accordingly.

A decision model builds on guidelines, probabilities, utilities, probabilistic relationships, among other sources of information. Decision tables are the result of evaluating a decision model, taking into account that information. Their extraordinarily large size motivated us to analyse them. The aim was to save memory space and, more interestingly, retrieve knowledge (to understand DSS suggestions). In our previous paper we managed to achieve both aims. Moreover, by analysing the items—groups of cases from the decision tables with the same optimal alternative, we could get an explanation of that optimal alternative, the similarity among several alternatives, attribute relevance… Therefore, KBM2L lists managed to solve space savings, optimization and explanations of decision tables. In this paper, the KBM2L framework is extended to deal with queries, one of the most important DSS facilities. The user enters any query into the DSS, assuming that the model (influence diagram) has been validated. This is more than a simple database query, which matches a single rule. Nowadays, influence diagrams do not have any such facility, and users have to deal with huge decision tables from which it is almost impossible to extract useful/concise information. Open queries and situations with imprecise/uncertain responses are specially difficult. These are the cases that we solve in this paper. The focus is on guiding the user toward what variable to query to get a more accurate and convincing response. The optimal and operative bases allow the records involved in a query to be organised from different perspectives. General queries leading to imprecise responses are addressed via an attributes–policy relationship learning process, where interaction with experts is required to arrive at a satisfactory response. Our approach provides the KB definite exploitation for the DSS. As opposed to only listing the influence diagram outputs, we report on improvements in space savings, knowledge extraction as rules, explanations of optimal policies and satisfactory answers to complex queries. Despite the power of our iterative scheme of progressive knowledge elicitation, a possible field of future research would focus on enabling queries with constrained rather than non-instantiated attributes, covering initial beliefs about the attributes. Also, more effort could be employed in determining good operative bases if there is more than one. Two criteria could be: minimum computational effort to output the new KBM2L and minimum item fragmentation. Finally, rather than directly allowing the expert to choose a decision criterion in Algorithm AA2, we could first implement a search within the tree of possible sessions, i.e. possible r − y − r − y ⋯ (response r and instantiated attributes y) sequences. This would filter out possibilities that will not satisfy expert expectations, facilitating choices.