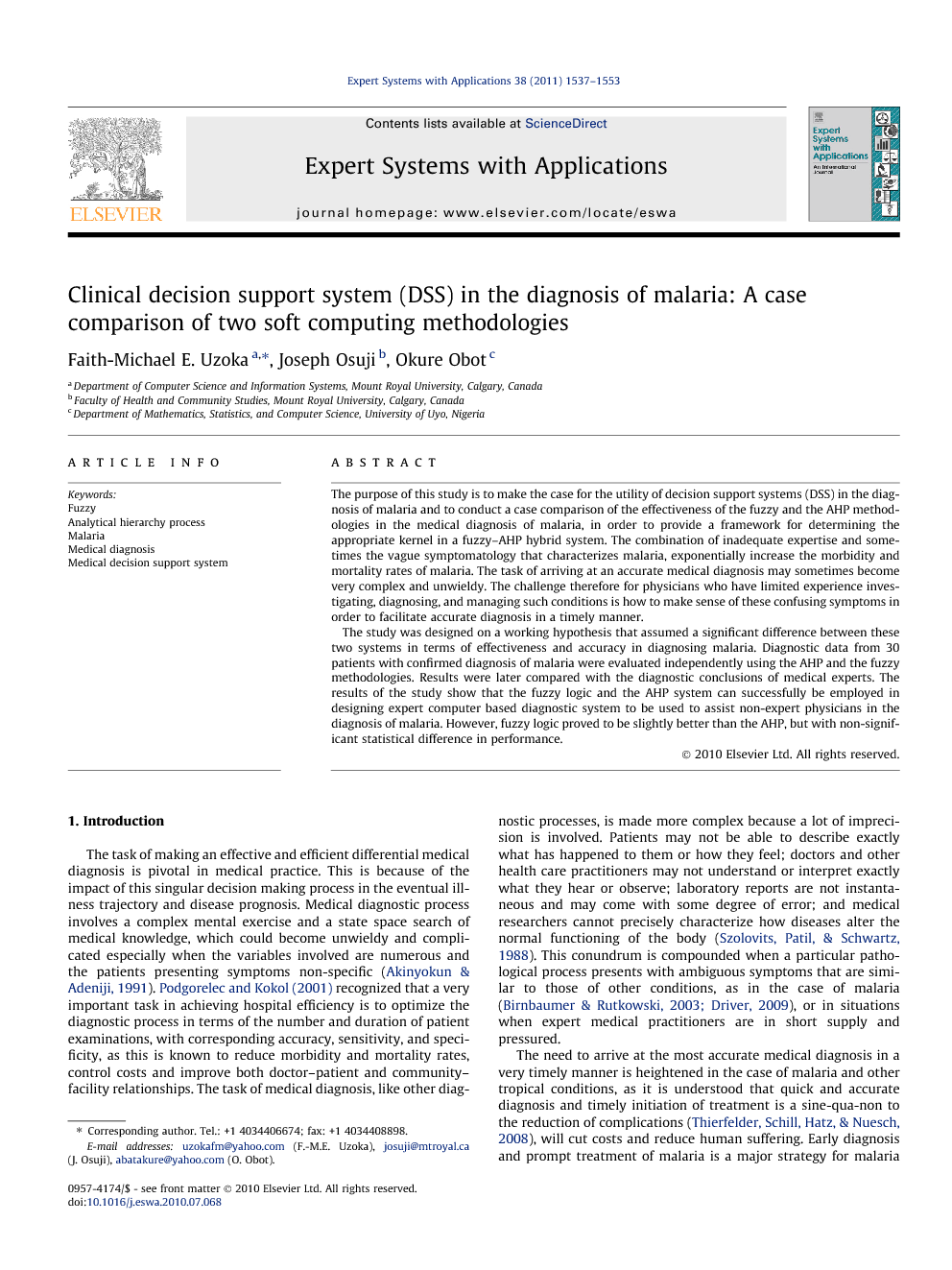 The purpose of this study is to make the case for the utility of decision support systems (DSS) in the diagnosis of malaria and to conduct a case comparison of the effectiveness of the fuzzy and the AHP methodologies in the medical diagnosis of malaria, in order to provide a framework for determining the appropriate kernel in a fuzzy–AHP hybrid system. The combination of inadequate expertise and sometimes the vague symptomatology that characterizes malaria, exponentially increase the morbidity and mortality rates of malaria. The task of arriving at an accurate medical diagnosis may sometimes become very complex and unwieldy. The challenge therefore for physicians who have limited experience investigating, diagnosing, and managing such conditions is how to make sense of these confusing symptoms in order to facilitate accurate diagnosis in a timely manner. The study was designed on a working hypothesis that assumed a significant difference between these two systems in terms of effectiveness and accuracy in diagnosing malaria. Diagnostic data from 30 patients with confirmed diagnosis of malaria were evaluated independently using the AHP and the fuzzy methodologies. Results were later compared with the diagnostic conclusions of medical experts. The results of the study show that the fuzzy logic and the AHP system can successfully be employed in designing expert computer based diagnostic system to be used to assist non-expert physicians in the diagnosis of malaria. However, fuzzy logic proved to be slightly better than the AHP, but with non-significant statistical difference in performance.

The task of making an effective and efficient differential medical diagnosis is pivotal in medical practice. This is because of the impact of this singular decision making process in the eventual illness trajectory and disease prognosis. Medical diagnostic process involves a complex mental exercise and a state space search of medical knowledge, which could become unwieldy and complicated especially when the variables involved are numerous and the patients presenting symptoms non-specific (Akinyokun & Adeniji, 1991). Podgorelec and Kokol (2001) recognized that a very important task in achieving hospital efficiency is to optimize the diagnostic process in terms of the number and duration of patient examinations, with corresponding accuracy, sensitivity, and specificity, as this is known to reduce morbidity and mortality rates, control costs and improve both doctor–patient and community–facility relationships. The task of medical diagnosis, like other diagnostic processes, is made more complex because a lot of imprecision is involved. Patients may not be able to describe exactly what has happened to them or how they feel; doctors and other health care practitioners may not understand or interpret exactly what they hear or observe; laboratory reports are not instantaneous and may come with some degree of error; and medical researchers cannot precisely characterize how diseases alter the normal functioning of the body (Szolovits, Patil, & Schwartz, 1988). This conundrum is compounded when a particular pathological process presents with ambiguous symptoms that are similar to those of other conditions, as in the case of malaria (Birnbaumer and Rutkowski, 2003 and Driver, 2009), or in situations when expert medical practitioners are in short supply and pressured. The need to arrive at the most accurate medical diagnosis in a very timely manner is heightened in the case of malaria and other tropical conditions, as it is understood that quick and accurate diagnosis and timely initiation of treatment is a sine-qua-non to the reduction of complications (Thierfelder, Schill, Hatz, & Nuesch, 2008), will cut costs and reduce human suffering. Early diagnosis and prompt treatment of malaria is a major strategy for malaria control (Praveen et al., 2008). In order to improve the possibility of early and accurate diagnosis of malaria, there is the need for the application of artificial intelligence or other decision support systems in the diagnostic process, because these are known to improve practitioner performance, reduce costs and improve patient outcomes (Seising, 2006). A number of expert technology oriented systems have attempted to mitigate these challenges, and have attempted to address the subjects of knowledge acquisition, representation, and utilization in medical diagnosis. However, the problem of managing imprecise knowledge still exists. Clinical decision support systems utilize patient’s data and some inference procedures to generate case specific advice and suggestions to the practitioner (Wyatt & Spiegelhalter, 1991). Four major areas these support systems have found applicability in medical practice include; administrative procedures and referrals, managing clinical complexity and details, cost control and supporting clinical diagnosis, promoting best practices and improving the efficiency of medical practice (Perreault & Metzger, 1999).

Medical diagnosis is a complex function that requires the combinatorial analysis of decision variables, most of which are qualitative in nature. It is possible to group these variables and arrange them in a hierarchical structure for the purpose of analysis. There is a high level of uncertainty management medical diagnosis. The act of medical diagnosis involves because human reasoning and decision making is fuzzy, involving a high degree of vagueness in evidence, concept utilization and mental model formulation (Wang & Elhag, 2006). The introduction of the analytic hierarchy process (AHP) by Saaty (1981) enhanced understanding of the hierarchical structuring of decision variables and popularized the methodology of pairwise comparison of such variables to determine their relative importance in the decision matrix. However, the application of only the traditional AHP to evaluation of alternatives has some limitations (Chou, Chou, & Tzeng, 2006). Its sole use in medical diagnosis of malaria would have the following shortcomings: (1) AHP uses crisp values for scoring purposes. The derivation of weights attached to a symptom is carried out by medical experts, whose perceptions and feelings about a given weight are vague; (2) The diagnosis of a given patient is subjective and relative by nature. It would be inappropriate to assign crisp value to subjective judgment, especially when the data is imprecise or fuzzy. FL provides a simple way to arrive at a definite conclusion based upon vague, ambiguous, imprecise, noisy, or missing input information. FL does not require precise inputs, is inherently robust, and can process any reasonable number of inputs and numerous outputs can be generated, though system complexity increases rapidly with more inputs and outputs. Simple, plain-language rules are used to describe the desired system response in terms of linguistic variables rather than mathematical formulas, which makes FL work closely to the way human reasoning does. Besides dealing with uncertainty, fuzzy logic models commonsense reasoning, which is difficult in conventional systems that model mainly exact reasoning (Wang & Elhag, 2006). AHP is known to be very good in processing multidimensional and hierarchically structured data which calls for the relative importance of criteria groupings. This feature is not found in fuzzy logic methodology, which handles vague and imprecision of data and moreover it resembles human decision making with its ability to work from approximate reasoning and ultimately find a precise solution. In integrating the two methodologies, the limitations of one method are eliminated while their strengths are enhanced. This study presents one of the efforts aimed at comparing the use of AHP and fuzzy logic in medical diagnosis, with the aim of determining the component that is more effective in analysis, synthesis and evaluation of medical symptoms in malaria. The more effective technology would ultimately be proposed to form the entrant technology of the inference engine in a hybrid diagnosis system. The results show that there is no statistical difference between the AHP and fuzzy logic in terms of effectiveness of diagnosis of malaria. However, a close inspection of the system performance summary (Table 5) shows that the fuzzy logic is slightly better than the AHP in obtaining matching diagnoses with the medical experts’ diagnosis. Since the 1980s a number of works have been done in the use of fuzzy or AHP or a combination of both in medical decision making. However, not much research has been conducted on the comparison of both methods. A literature search shows only one of such studies, which was conducted by Ghotb and Warren (1995) on the comparison of AHP and fuzzy methodologies in hospital equipment acquisition decision. The results of their study are similar to those obtained in our study – that the fuzzy method produces a non-significant superiority over the AHP method.